A statue in Atlanta shows a Falcons player giving Colin Kaepernick a wedgie. Oh, and Kap's parents took a picture in front of it. That just about sums it all up!

Share All sharing options for: Colin Kaepernick's parents next to statue of him getting a Falcons wedgie

This certainly is lovely! Colin Kaepernick's agent, Scott Smith of XAM Sports, tweeted out this picture taken with Colin Kaepernick's parents outside the Georgia Dome. Yes, it is a Falcons player holding up Kaepernick by his underwear, giving him a wedgie.

I pray Scott texted this picture to Colin so he can see it before the game. He doesn't need any extra motivation, but this could at least potentially calm him down if he's getting any nerves. It will be interesting to see how Kap comes out of the gates in such a big game. He had the pick-six last week but quickly turned things around, so I am not overly concerned. As the stakes grow, he seems to step right into it without too many concerns.

I really don't know what else needs to be said about one of the funniest pictures I've seen in a while. Or maybe it's just most random pictures. I don't really know. 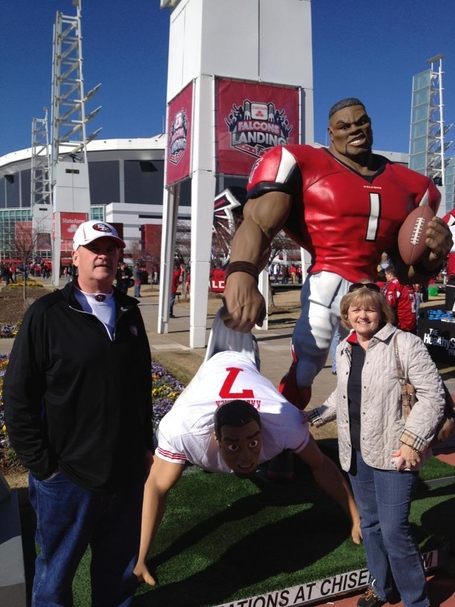