Every good sports story starts with an analogy, so let's set one up. Let's all imagine, won't we, that you're in sales. you graduated from a top business program with an MBA and are recruited to VP of Sales by a company with a long history that's been struggling lately. They are rebuilding under a CEO who has a vision of bringing back the glory of the team. However, that CEO quickly get's replaced after early sales numbers look less promising than hoped. The new boss, who instantly doesn't like you and wishes they'd recruited in the local guy who is now in the Midwest looking promising, starts undercutting you.

While you struggle to work with limited options, stockholders begin to ask questions about your ability to lead the division to better numbers. You lose clients, and then you get sick. You miss out on a few key sales, and hurry back to work before you're back at full strength. You struggle to close sales, lacking the energy to make it through the long negotiations, and not as sharp as you should be. For the next few years, the corporate ladder constantly reshuffles. Along the way, you are put with a talented sales staff, but new policies and training is coming down from the top every few months, and you spend so much time fighting for consistency, that you're job is constantly on the line.

Now, you could quit, you could decide to stop trying, and you could raise hell. Instead you work hard, put your head down, and continue to make sales you are told are above you league. Landing a few big clients, you keep focused on the goal. Criticism comes out in the Wall Street Journal that the sales VPs in Chicago and Wisconsin are far more talented, and should have been recruited ahead of you. You ignore it.

Then, in 2011, a new CEO walks in. He's been working in regional sales, and this is his first big corporate position. He sits you down and tells you he was once in your shoes. He is passionate, and instead of telling you, like everyone else, that it's your job on the line, he apologizes on behalf of the whole company. The new Chairman of the Board is serious about turning the company around. So you go to work. You surprise everyone, leading your company into a top spot in sales numbers, nearly making the Fortune 500 list.

Things look good. Then, you're stuck in an airport in St. Louis. You can't make it to the next sales call. So your boss sends in your backup, a young kid who has been with you on a few sales. Talented, he lacks your savvy and experience. Then, he performs brilliantly, not just landing the client, but doing so on favorable terms. Then he's sent on another call. And another. You're out of St Louis, but he's still sent on calls.

You could feel like you've been replaced. In fact, you have been. Your sales staff, the staff you built, is out there, landing sale after sale, using the techniques and skills you developed with them. He comes back into the office a hero, cheered and applauded for his depth and confidence.

Do you, Mr. VP of sales, hand in your resignation, serve out your contract in your office playing Angry Birds? Or do you sit him down in your office, shake his hand, and offer him insight? See this as an opportunity to leave a lasting legacy on a quarterback who is fortunate to never be squandered like you were, or see it as a slight to your hard work and perseverance? 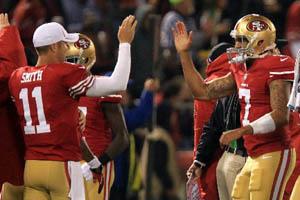 Let's be honest, if what happened to Alex Smith happened to us, we'd raise hell. We'd call our union rep, we'd file a complaint, and some of us would sue. Few, very few, of us would sit on the sidelines, every game, congratulating the kid who took a job we never lost. If Jim Harbaugh has vision, Alex Smith has insight.

Jim Harbaugh and Greg Roman have changed the NFL this year, probably more than any other coach using the Read Option or Pistol offenses. There is no question that it's the key to the success of the talented and multi-faceted 49ers offense. However, the key to Read-Option is the ability of the quarterback to be smart. He has to read the defense, make decisions, and improvise on his feet. The man who trained this offense to be ready for that was Alex Smith.

In November, when one stray hit took Alex Smith's brain and shifted it a few inches, he was putting up numbers that were not just good, they were a testament to what a smart, patient quarterback can do when he stops looking for glory and plays team ball. He had built, with Harbaugh and Roman, an offense that was constantly producing. It wasn't high impact or exciting like the Patriots or Seahawks, but it worked.

This was why everyone felt so slighted by the decision. We had started believing in, and even liking Alex Smith. The man we blamed for so long for the failure of this team had become the signature player. He was smart, efficient, careful, and devious. Truth be told, he was still playing defenses.

If you want to see the effects of his constant mentorship of Kaep, even after Harbaugh seemed set on the untested kid from Nevada, look at the difference between the Kaepernick who failed to produce in the loss against the Rams versus the one who played Green Bay.

Perhaps the most spectacular evidence of the Smith-Harbaugh strategy imprinted on Kaepernick was the 4th-and-1 non-play last Saturday. The 49ers had a lead, and were in control of the game. The Packers looked seasick, scared, and seemed to need a refresher on pass-rushing. Then, they looked like they had finally stopped the 49ers. A fieldgoal by the shakey David Akers seemed like the last breath of hope. Then Harbaugh, spotting his team on the Packer's 18 yard line, kept his offense of the field. Kaepernick, who had just terrified the Packers with his running, started on the hard count.

What we saw next was not a move a second year quarterback with less than a dozen starts pull off. It was one a seasoned quarterback who understands just where the defense is does. One who is dangerous and who is so deep inside the opponents' mindset that he can will them into his plan.

Harbaugh isn't dumb or impulsive. He might be emotional, and he might need a new clipboard every quarter, but he's not going for a 4th-and-1 with a 14 point lead against Aaron Rodgers. Still, without calling a play, without snapping the ball, Kaepernick pumps his legs, riles up the Packers defence, and BJ Raji jumps. Yards: 5. First downs: 1. Snaps: 0. It could be easy to point to the men in Yellow and Green as the culprits, but really, this was the plan.

You know who teaches a 25 year old quarterback to pull that off? Alex Smith. And by all accounts, Smith is as happy as anyone to see Kaepernick's success. That's probably the main reason Alex Smith deserves so much credit. For all the talk of Manning doing the coaching in Denver, Alex Smith is there, on the sidelines, and in the meeting rooms, feeding the juggernaut. If Kaep can run and throw like some kind of cyborg hybrid of Cam Newton and Brett Farve, he is now working with the crafty mind of Smith.

Alex Smith might not be a starter anymore, and he might be one of the highest paid second-stringers in the NFsL, but he might be one of the most valuable assets the 49ers have. In just 10 weeks, Kaepernick has gone from unpolished talent to a Force Of Nature. And that's, in great part, due to Smith's uncanny ability to read defenses, make good decisions, and outthink the opponent. Kaepernick is Alexander the Great, but Smith is Aristotle. And I am quite certain that the team-is-family minded San Francisco staff and players are as aware as anyone that Smith deserves as much credit as Harbaugh for the growth we've seen.

So as MVP words swirl around and people start picking their favorites, I'm going to state that Alex Smith deserves special recognition. For someone who has played so little in December and January, we see a lot of him on the field. We see Vernon Davis and Michael Crabtree running routes that Smith brought back to the West Coast. We see one of the best Offensive Lines opening up lanes, an offensive line that solidified into a brick wall with Smith under center. And we see Kaepernick, a quarterback who was a "bright future star" 8 weeks ago, quickly becoming the guy no one wants to be across the football from.

Most Valuable Player might be too much to give to Alex Smith. His talents are solid, but not amazing. His arm is accurate, but not strong. He can run alright, and he while he is a solid leader, he's quiet and careful. Still, on a team that doesn't seem to understand 1st gear, he's the man standing on the sideline, quietly smiling, offering his secret wisdoms to #7. Perhaps, just perhaps, Alex Smiths deserves Most Valuable non-Player.

(This is my first attempt at sports writing. I appreciate not only commentary, but also feedback on the writing itself.)