The San Francisco 49ers were out of their comfort zone in the NFC Championship, but regained their composure and finished strong.

For the fans that have been following the 49ers' "win, win, loss" trend in 2012, it was a nerve-racking first half of football on Sunday. San Francisco quickly fell behind, allowing 17 points by Atlanta to start off the NFC Championship.

They defense came out flat, and the team could not get a rhythm going on offense. Following the opening touchdown bomb to Julio Jones, the 49ers came out throwing - unsuccessfully. And before they knew what it them, San Francisco was down 17-0.

The play calling was questionable, considering the team's biggest asset is the offensive line and their ability to generate serious push in the run game. It took two unanswered scores for humble 49ers veteran Frank Gore to get in Jim Harbaugh's ear. 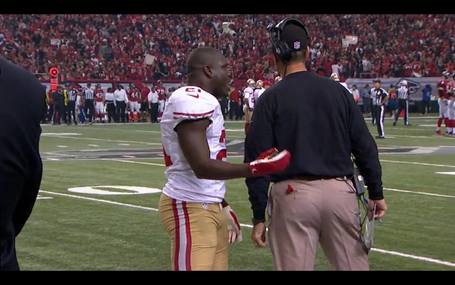 Gore wasn't getting many carries - especially back-to-back ones - and it prevented the 49ers from establishing a tempo. While we don't know what exactly was said, Gore has been known as the guy that never wants to get off the field and always wants to be contributing.

I can assume he felt helpless early in the game, as the game plan revolved around Colin Kaepernick's arm. Gore is a leader, a smart player and a team-first guy -- he knew exactly what needed to be done to get this thing rolling. And the adjusted approach led to San Francisco's first score of the day, courtesy of LaMichael James.

With just less than 15 minutes left in the half, the 49ers steadily began their comeback, opening their third series with four-straight Gore carries that resulted in two first downs. Roman then started calling in some jumbo formations, using Daniel Kilgore and Leonard Davis, even on 1st and 10.

They really started to slam the Falcons front seven and gain some ground offensively.

While Jim Harbaugh has veto power, Greg Roman is the official play caller. After a brief lapse, the Niners regained their identity and climbed back into this game. It was important for them to not flinch or overreact by altering their game plan. They began to utilize their core strengths, which helped slow this game down.

Above all else, Roman might've learned the most important lesson of the day. And that is that the 49ers do not have to be someone they're not. The ground attack is this team's bread and butter, and it is the key to 49ers' total offensive success.

Greg Roman admits Frank Gore could be a future coach with his learning of the game. #49ers