San Francisco 49ers running back LaMichael James is proving his worth in his rookie campaign. We discuss the first-year player and his contributions thus far.

I know, the headline sounds like a Counting Crows or Train album.

I was at the 2012 NFL Draft when LaMichael James was selected on Day 2. I, along with the majority of people in that venue, knew very well who the 49ers who had just taken. James was one of the most prolific runners in NCAA history, and was nothing short of dominant at the University of Oregon. 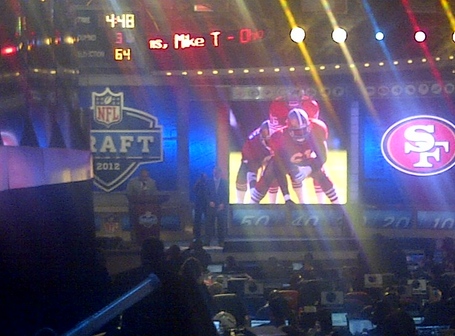 The first two things that crossed my mind when Jesse Sopoulu announced the pick were:

1) The 49ers already have a loaded backfield

2) Will what made LaMichael James great at Oregon make him great in the NFL?

I really began to think about his physical tools, leadership and the way he carried the Oregon program. I was more curious than hesitant. There were questions surrounding his size and whether or not his skills would translate to the pro level.

If not for those questions, James should have been a top-15 pick based on what he did with the Ducks. With this coaching staff, and knowing he didn't have to carry the load, I became confident that James would steadily transition into a productive role.

There is a chance that James explodes onto the scene and becomes an impact player well after No. 21 has moved on. He has found a way to contribute already, fulfilling a supporting role to lead man, Frank Gore. In the NFC Championship, James carried five times for 34 yards and his first touchdown.

He hasn't had an opportunity to rack up a lot of carries in a single game, but it's becoming clear that his speed and agility are going to be a problem for NFL defenders even. James has been effective, averaging 6.9 yards per attempt this postseason.

His ability to stop, accelerate and change direction was well-documented in the NCAA, but he's since been using those same tricks to make defenders miss at the next level.

Watching James hit the gap against Atlanta, exploding through the hole with such quickness -- I could've swore I had seen it a hundred times before. That was the same unanimous All-American I had been watching shred teams every Saturday for three years.

James has also played a factor in the 49ers' utilization of the read-option. Because he is the faster, more explosive running back, he tends to be the more deceptive guy. With Colin Kaepernick and LaMichael James doing sleight of hand behind this mammoth offensive line, and sub 4.5 speed going in one of two opposite directions, it become problematic for defenders to stay disciplined.

It's exciting to see James' skills carryover to the pros. He was one of the most exciting and dynamic playmakers in college football. It will be a treat to watch his continued development with Jim Harbaugh, Tom Rathman and this coaching staff. He's got the speed and complementary physical tools to be a home run threat for years to come.

Oh, and if you're looking for a nickname to the Gore-James tandem, I like Goregon.