Super Bowl 2013: The Booth Review saves "The best for last"

Welcome to the Super Bowl XLVII edition of The Booth Review! The San Francisco 49ers meet the Baltimore Ravens in New Orleans on February 3rd. There's one more game to play, and it'll be on the grandest stage of them all. What should we expect? Read on, Niners Faithful.

Share All sharing options for: Super Bowl 2013: The Booth Review saves "The best for last"

That's all the time Matt Ryan and the Atlanta Falcons had to engineer a miracle play to win the game, though it honestly felt more like six hours.

Ryan really should be commended for staying in the game despite rolling over his left shoulder under the weight of Ahmad Brooks in the previous series. As he trotted back onto the field for the final play, Ryan visibly winced as he held up his left arm in an imaginary sling. He could only muster a throw of about 30 yards into the arms of Julio Jones - about 30 yards short of where it needed to be.

Game over. A quiet fell over the Atlanta sideline while San Francisco's came to life. After waiting almost two full decades, the 49ers were finally going back to the Super Bowl.

For your viewing pleasure, my reaction:

...but for good reason! It was the first time my beloved Niners made it to the Super Bowl in my lifetime. Well, there was Super Bowl XXIV in 1990 and Super Bowl XXIX in 1995, but I'm pretty sure I was still crapping my pants at the time, so those don't count.

In the understatement of the century, I was excited.

The Niners had punched their proverbial ticket to New Orleans. Mere hours later, the Baltimore Ravens would join them after orchestrating a similar second half shutout of Tom Brady's New England Patriots.

So here we are, less than two weeks away from the greatest sports spectacle of the year. And for the first time in a long time, the Niners - our Niners - play for the right to be called "world champions."

I present to you: "Five things (I think) about Super Bowl XLVII." 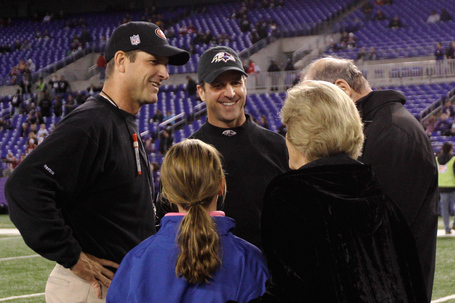 BALTIMORE, MD - NOVEMBER 24: Head coach Jim Harbaugh (L) of the San Francisco 49ers and his brother, head coach John Harbaugh of the Baltimore Ravens (C) talk with their parents Jack and Jackie Harbaugh, and John's daughter Allison, before the start of the game between the Baltimore Ravens and the San Francisco 49ers at M&T Bank Stadium on November 24, 2011 in Baltimore, Maryland. (Photo by Rob Carr/Getty Images)

Have you heard? Jim and John are related.

For your sake, this will be my first and last mention of this in writing, because lord knows you'll be beaten over the head with it over the next two weeks.

In all fairness, it's a fascinating story - it really is. I know if I was facing my own brother in any sort of hyper-competitive contest, it would be my only desire to destroy him mercilessly. Two brothers facing each other for a world championship? It has never happened before in the National Football League or, hell, any major professional sports league. 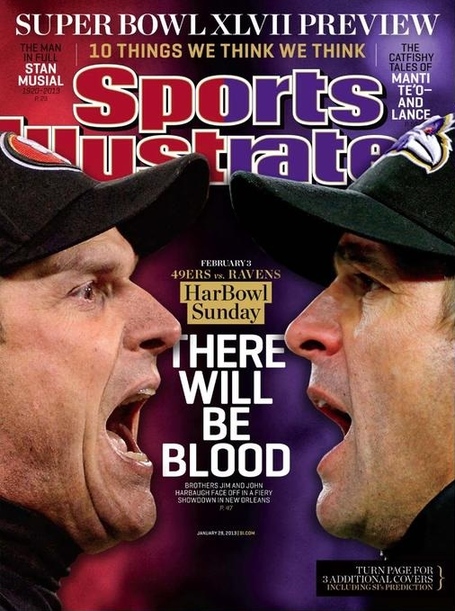 But it's really not the epic "Cain and Abel" sports story that every media outlet is making it out to be. They're brothers from a football family in which their father, Jack, was a renowned football coach at Western Kentucky University. They're both incredibly talented at what they do, and they love and respect each other. That's about it.

Don't take it from me.

It makes for a fantastic footnote, but really, what's more important in a football game than the football players on the football field? The legendary Ray Lewis is playing his last game. Randy Moss is still searching for that elusive ring. And then there's Frank Gore, Ed Reed, Justin Smith, Terrell Suggs...all veteran greats that have yet to hoist a Lombardi trophy.

Let's celebrate the players, shall we? 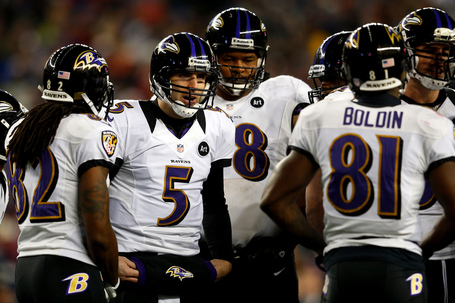 FOXBORO, MA - JANUARY 20: Joe Flacco #5 of the Baltimore Ravens talks with Anquan Boldin #81 in a huddle against the New England Patriots during the 2013 AFC Championship game at Gillette Stadium on January 20, 2013 in Foxboro, Massachusetts. (Photo by Jim Rogash/Getty Images)

Julio Jones almost singlehandedly dismantled the San Francisco secondary on Sunday, torching Tarell Brown to amass over a hundred receiving yards and a pair of touchdowns - after just over a quarter of play. The Niners had dug themselves into a 17-point hole, and Jones handed out the shovels.

All signs pointed to a humiliating blowout loss until San Francisco stormed back in true, herculean fashion. Colin Kaepernick, Frank Gore, and Vernon Davis all contributed to what would be the biggest comeback win in championship game history. It was dramatic, it was intense, and it was thrilling, but...let's not try that again.

I know some of you are thinking: But Anthony! That was against Matt Ryan, Julio Jones, Roddy White, and Tony Gonzalez! The Ravens offense isn't NEARLY as dangerous as the Falcons!

And that's where you're wrong. Joe Flacco, Torrey Smith, Anquan Boldin, and Dennis Pitta aren't the Falcons, but they pose just as big of a threat. You don't have to look further than this postseason. Consider their stats in the last three games (against the Indianapolis Colts, Denver Broncos, and New England Patriots, respectively):

Flacco loves throwing deep. And if the Niners don't tighten up their secondary, they could be in for another long day.

3.) 'THE INCONVENIENT TRUTH' FOR THE RAVENS 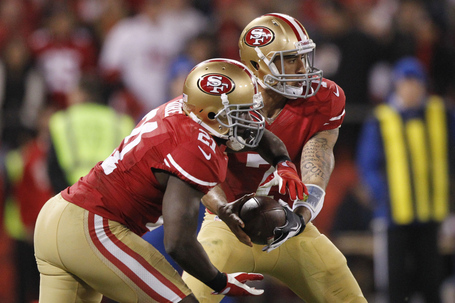 Aside from the historical comeback, perhaps the most impressive aspect of the NFC Championship Game was San Francisco's persistence to run the ball despite falling behind by three possessions.

It's obvious that the Falcons expected Kaepernick to run wild, because that's exactly who they zoned in on every time the Niners ran a read-option play. After carrying the ball 16 times for 181 yards and two touchdowns against the Green Bay Packers, Kaepernick ran the ball just twice against the Falcons - one of which was an improvised scramble. In the pistol offense, the onus falls on Kaepernick to determine whether to keep the ball himself or hand it off. Kaep chose correctly every single time.

The obvious beneficiaries were the running banks, Frank Gore and LaMichael James, who produced a combined 124 rushing yards and three touchdowns. All three touchdowns, by the way, came out of the pistol.

This creates quite a conundrum and a potential headache for the Ravens defense. Are they going to see one extreme (Kaep against the Packers) or the other (Gore and James against the Falcons)? Or will they see a homogenous blend of both? A perfect segue into my next thought... 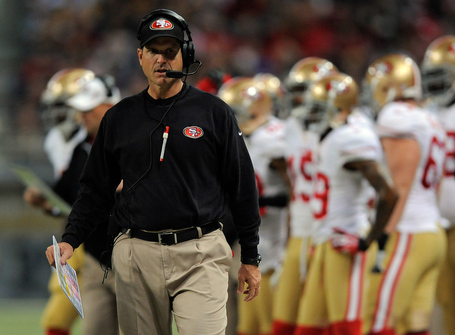 This is the point in the article where I make a statement based on nothing more than gut feeling. But I really, really believe we're going to see Jim Harbaugh unveil a handful of plays that we've never seen before.

What's not so secretive is Jim's unnerving reluctance to speak to the media. When it comes to strategy, he's meticulously guarded in both his demeanor and his words (a perfect candidate for celebrity poker). Why so secretive? Well, it makes plenty of sense. A journalist's job is to extract information and publish said information for a public forum. In Jim's mind, there is absolutely zilch to gain and everything to lose. Why give away even an iota of information that could potentially benefit your competition?

But in the biggest game of the year, it's time to spill the beans, because there's nothing left to lose and absolutely everything to gain. For a chance to hoist the most prestigious trophy in football, you better believe Jim will be pulling out all the stops. The Ravens defense might be caught off guard to see some new playbook material, but it wouldn't surprise me one bit. 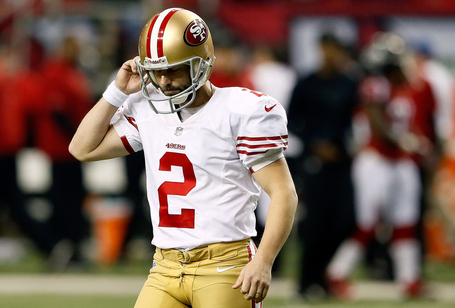 ATLANTA, GA - JANUARY 20: Kicker David Akers #2 of the San Francisco 49ers reacts after he misses a 38-yard field goal in the third quarter against the Atlanta Falcons in the NFC Championship game at the Georgia Dome on January 20, 2013 in Atlanta, Georgia. (Photo by Kevin C. Cox/Getty Images)

There hasn't been as many opportunities to criticize Akers of late, but that has more to do with the success of the offense and their ability to punch it into the end zone. If you thought the former All-Pro kicker's struggles would have subsided in the postseason, you've mostly been wrong. In the NFC Championship Game on Sunday, Akers was brought onto the field for a 38-yard attempt in the third quarter that could have tied the game. Instead, he missed - badly - and the ball shtoink-ed right off the tip of the left upright.

I have to believe Akers is still being affected by his hip injury sustained earlier in the regular season. However, the most disconcerting part of it all is his body language. As Akers missed more and more field goals throughout the regular season and into the postseason, he seemed to develop quite a temper tantrum. After one particular missed attempt, he made his way to the sideline, violently tossed off his helmet, and threw himself onto the bench like a five-year-old in timeout. These are precisely the types of emotional outbursts you never want to see from your kicker.

It's obvious that Akers has lost a great deal of confidence. Former Niners kicker Joe Nedney was interviewed a few weeks ago to provide perspective on Akers' recent struggles.

"The telling sign to me is that he is missing them wide left, which means he is not getting his hips through the ball," said Nedney. "He is not swinging confidently through the ball. It's kind of what we call poking-and-hoping."

The Niners have lasted this far without an effective kicker, but if it comes down to a San Francisco field goal attempt for the Lombardi trophy, how good would you feel about Akers' "poking and hoping?" I didn't think so.

Truthfully, I'm trying to think about the big game as little as I can, but I just can't help myself. No, seriously. I can't. Since Sunday's victory over the Falcons, I've had a Super Bowl-related dream each and every single night and subsequently wake up thinking the Niners won. And I've already decided that if they lose, I'm just going to fabricate a fantasy world where I pretend they won. If Manti Te'o can do it...

It's gonna be a long two weeks. Next stop: New Orleans!