We take a look at Frank Gore's recent uniform violation in the NFC Championship Game.

Well, that's lame. Frank Gore has apparently been fined $10,500 for wearing his socks rolled down in Sunday's NFC Championship Game win over the Atlanta Falcons. The fine is so steep because it was the second such violation this season. He was fined $5,250 earlier in the season.

As the picture above shows, you can see the socks rolled down on his legs. If you are looking for a comparison, here is Frank Gore during the Seahawks game in Week 16. Talk about losing the battle but winning the war! 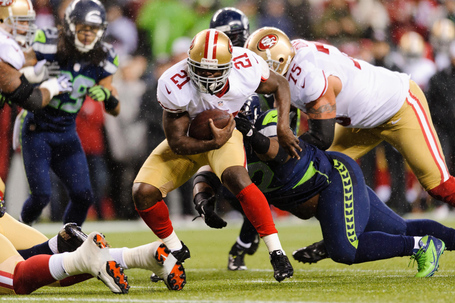 While I do get the idea of fines for uniform violations, it does still seem rather comical at times. When an employee has a uniform violation, they get in trouble. I totally get that. It doesn't make it seem any less bizarre, but I think that has more to do with the idea of fining somebody $10,500 for not wearing socks properly. It just comes across as odd.