As part of a series that will look at every position heading into Super Bowl Sunday, we take a closer took today at the 49ers' OLBs, Ahmad Brooks and Aldon Smith.

Against "elite" quarterbacks, pressure is the name of the game. Joe Flacco may or may not be "elite" (I won't get into it here), but he is certainly playing at a high level this post-season; and a part of limiting him will be getting pressure before he can take shots deep down-field.

Baltimore has only given up 4 sacks in their 3 playoff games, and Joe Flacco is averaging over 9 yards per attempt in those games, with 8 touchdowns and 0 interceptions.

San Francisco may have Colin Kaepernick, but Flacco himself has been playing superbly over his last three games - and two of those were on the road. The biggest difference between the two is that Flacco's completion percentage is hovering just above 50% in those games, and you have to believe the San Francisco defense will be able to make him pay for every missed chance.

Part of that is the number of deep passes Flacco attempts - 28 in the post-season so far, or almost 10 a game. Enter Aldon Smith.

Against Green Bay, Aldon Smith did not do much to give hope that his sack drought would end any time soon; but Aaron Rodgers relied on a lot of quick strikes that negated much of the pass rush.

Verse Atlanta - though Aldon did not record a sack - the Niners' second-year linebacker did record 2 hits and 5 hurries, along with a crucial fumble recovery, in one of his best total games of the season. And that's the kind of performance we will want from Aldon in the Super Bowl. It may not look great on the stat sheet, but it will affect Flacco's ability to throw deep.

Because the Baltimore offense, similar to Atlanta's last week, is going to look for big plays down-field whenever possible, and Aldon will therefore have opportunities to make an impression on the Ravens' quarterback.

I do not personally believe #99's recent "drought" is necessarily indicative of bad play. When your pass rush is feared, teams will adjust and do what they can to negate it. The important thing going into Sunday is that the 49ers play well against the run, which Aldon has been a big part of; and that they force Flacco into the kind of game he is not as comfortable playing: "small ball."

Best way to do that is to get pressure when he backs up to throw deep. This is something New England - with a notoriously awful secondary that Kaep took advantage of earlier in the year - and Indianapolis, who had similar problems defending the pass (and the rush, really), were unable to do.

Even Denver, with a good, though much over-rated, defensive unit (this happens when you get to play AFC West offenses six times a year), found themselves in a shootout with Joe Flacco.

Though San Francisco now has faith they can win a shootout, Aldon should have a better go at affecting Flacco's ability to spread the field, and his performance against Atlanta last week reflects this.

All Done ain't done yet.

With all the attention San Francicso's star inside linebacking duo accrue, and with Aldon Smith previously chasing the single season sack record, Ahmad Brooks has slipped under the national radar despite having a great season.

But in the NFC Championship Game, Brooks emerged with several huge plays that have given him more attention on the stat sheet and the highlight reel.

In honor of Brooks' low-profile season, therefore, I thought it fitting to give him a bit more attention here today.

So let's look at some of his most impactful plays against Atlanta via the coach's film.

Play #1 - Batted pass at the goal-line

After Michael Crabtree's fumble at the 1, Atlanta took over with the lead and the football.

But first things first, they needed to pick up a 1st down to at the least create space for their punter. Otherwise they would be giving the ball back to Colin Kaepernick on a short field. 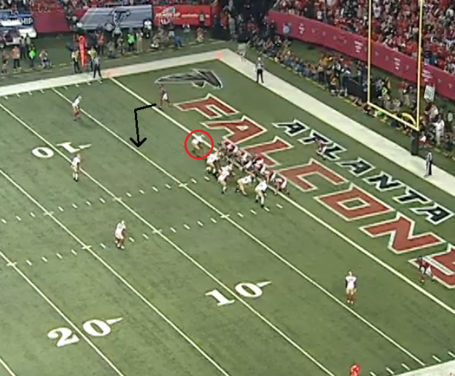 The Falcons lined up heavy, forcing San Francisco's 7-man front to play tight. What I find interesting with this play is that most teams would have brought an 8th man into the box to stop the run, and played Cover 1 over the top, relying on their DBs to not get beat deep.

But San Francisco's front -7 is a bit more elite than most teams, and so they find the extra help unnecessary.

At the snap, Matt Ryan immediately looks to his right to throw to Roddy White, who is on a very quick slant. The play is designed to achieve something similar to a four yard run; but with the kind of success Atlanta had throwing on this day, I don't blame them for opting a quick pass, instead. 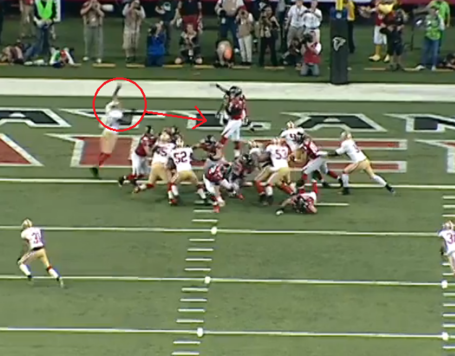 As you can see, the running back is still behind Ryan and has barely even moved.

The play has already been disrupted as Ryan is forced high onto his toes to deliver the ball over Brooks, but he fails.

Brooks, who had a clear shot at the quarterback right away, is smart enough to stay put and jump. He gets his left hand on the ball and deflects it, forcing Atlanta into an awkward 2nd and 10 from their own endzone, and eventually leading to a key three-and-out.

After the 49ers took the lead, Atlanta responded with a productive drive that moved them into the red zone.

Jacquizz Rodgers took a handoff 1 yard on a 1st and 10 from the SF 16, and it brought us to the two minute warning.

Writing about it now is certainly less stressful than watching it happen for the first time. 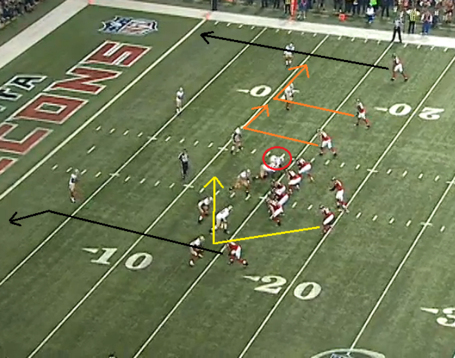 White (top black) is on a basic sprint up the sidelines. Julio Jones (bottom black) is running a very deep corner (even deeper than I had room to picture here, as he does not begin his cut until he reaches the endzone).

Out of the backfield, Jason Snelling is flooding out and then cutting a short slant underneath to give Ryan is only option over the middle. That's because both tight end Tony Gonzalez and the Falcons' third receiver (Harry Douglas, pretty sure) are running 5-yard outs.

A very curious play-call that I believe was meant to suck the 49ers' in and hit White up top and over.

That's because Ryan first looks to his right. But upon seeing the deep coverage over White is good (I wanna say that's Terrell Brown, but don't quote me), Ryan looks to his left. 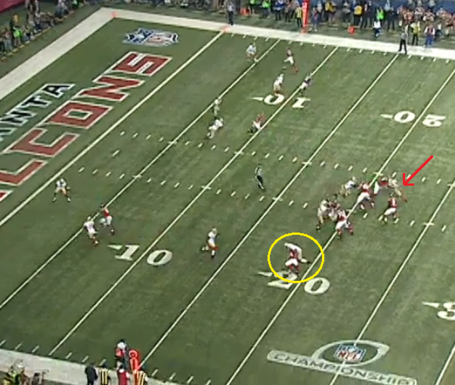 Unfortunately the coverage is good there, as well. Plus, Ryan senses Brooks (red line) about to rain down on him while his safety route, Snelling, is being smothered by Aldon Smith, who does a great job disrupting the play. 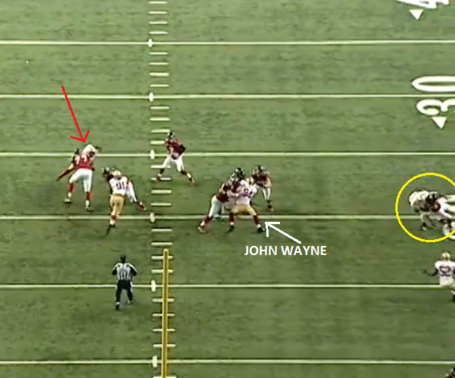 Snelling manages, here, to get around Aldon, leaving #52, Patrick Willis, in coverage.

Willis makes the eventual tackle after a 5 yard gain, but he's not the only one makes a tackle on the play, as Brooks flies around his man outside and lays a huge hit on Ryan, driving his shoulder into the mat and leaving "Matty Ice" probably needing an ice pack or two after the game.

Oh, and Cowboy is taking up three blocks. Nothing to see there. Moving on.

After the Willis tackle, it is 3rd and 4 - the game getting more and more tense by the second. Clutch time.

As San Francisco lines up, Donte Whitner lets his teammates know, "Watch out for the sprint pass." 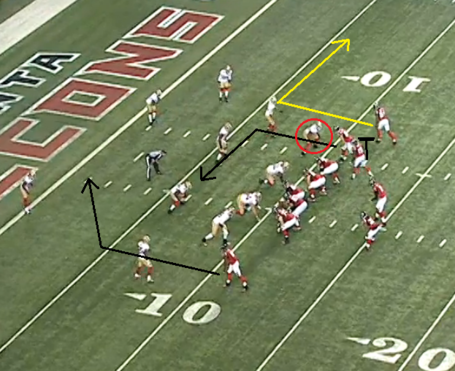 Whitner said, "I knew that was coming," which is why I am sticking to my original nickname for him, "The Poet," in reference to Dante. Whitner's intelligence, and his always-eloquent manner of speech, make it fit. On this play, he lets his 10 brothers on the field in on a secret; now its up to someone to stop it.

Ahmad (circled red) is on the rush, but he is keeping his eye open for the sprint out that White (yellow) is running. 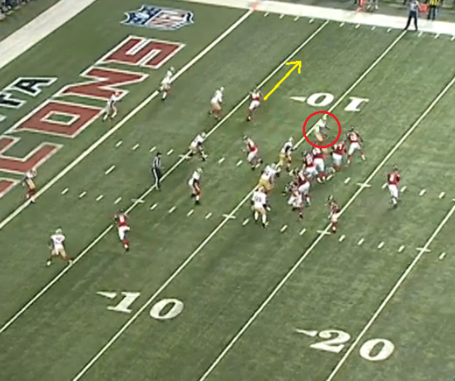 As Ryan rolls right directly after the snap, most of his line goes with him, and the 49er defense follows; but none of them, including Brooks, actually engage anyone in a block. Brooks is circled here instead keeping his eyes on Ryan. He knows what's coming. 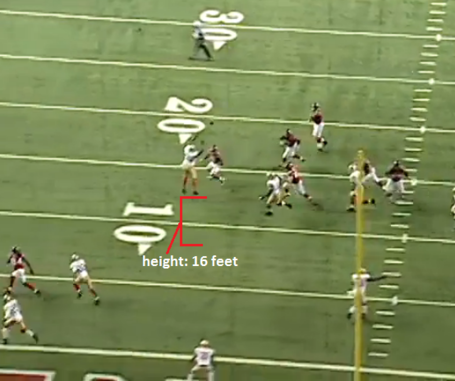 As "Matty Ice" releases the ball, Brooks jumps a considerable distance into the air to once again get his left hand on it.

I estimate that he jumps about 16 feet, and I have diagrammed that for you above.

The leap saved what would have otherwise been a 1st down. It forced Atlanta into one last shot on a 4th and 4, with the game basically on the line.

Let's just say it didn't go well for the birds.

Brooks may have not had his best game of the season, but he stepped up big on several key plays and was a factor in the 49ers' victory.

Let's hope for some big things next Sunday, too.