Days away from Super Bowl XLVII, Niners Nation is breaking down the roster and presenting a sort of position preview for the Faithful. Today, we take a look at the running backs spear-headed by the ever-reliable Frank Gore.

The fine folks at the San Francisco 49ers Official Message Board were engaged in a pretty intriguing discussion the other week. The topic up for debate: which veteran on the current roster is most deserving of a Super Bowl ring? Some voted Vernon Davis, and others said Justin Smith. Some pushed for Patrick Willis, while others mentioned Randy Moss. However, there was one name that was featured almost unanimously on every list: Frank Gore.

Gore, 29, has been on the team since being drafted in 2005 out of the University of Miami - the same draft class that yielded quarterback Alex Smith two rounds and 64 picks earlier. But unlike Smith's career which fluctuated wildly through the years, Gore's has remained steady and consistent.

This is Gore's eighth season in the league, and with 51 career rushing touchdowns and 8,839 yards on the ground, he's been officially crowned as the franchise's rushing king. Matter of fact, Gore is second only to Steven Jackson (56) for most rushing touchdowns among active running backs. Consider that Jackson has 484 more career carries, and Gore's achievements are all the more impressive. 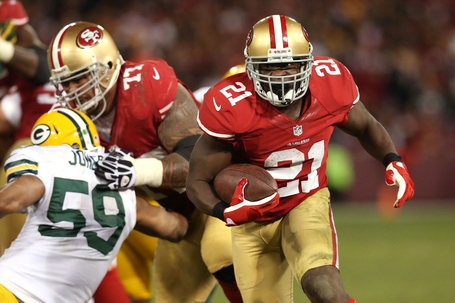 While he doesn't have the breakaway speed that he once did - his knees are basically held together with duct tape at this point - he's still performing at an incredibly high level. Gore placed in the top ten in almost every major rushing category this year in the company of guys like C.J. Spiller, Stevan Ridley, Alfred Morris, and Doug Martin - all of whom are considerably younger.

While Gore didn't even come close to his career-best 2006 totals in total rushing yards (1,695) and average yards per carry (5.4), it really felt like Gore had a career year, didn't it? That's because in some ways, he did have a career year.

With 54 less carries than in 2006, Gore recorded just as many rushing touchdowns. He was a sledgehammer between the tackles as he accounted for a remarkable 67 first downs, just one short of tying his career-best. Frank's feeling fresher than ever, and that's due in large part to the emergence of rookie running back LaMichael James and the jack-of-all-trades Anthony Dixon.

"It keeps me fresh. I love it," said Gore. "Earlier in my career, I probably wouldn't like it, but now, getting ready for the fourth quarter, the defense is probably wearing down. I'm fresh, and I get going." 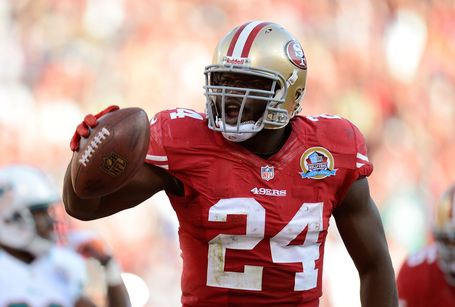 SAN FRANCISCO, CA - DECEMBER 09: Anthony Dixon #24 of the San Francisco 49ers celebrates after scoring a touchdown on a one-yard run in the fourth quarter against the Miami Dolphins at Candlestick Park on December 9, 2012 in San Francisco, California. The 49ers won the game 27-13. (Photo by Thearon W. Henderson/Getty Images)

Kendall Hunter proved last year to be a more-than-capable spell to Gore, but he was unfortunately lost for the season after tearing his Achilles' tendon in Week 12. Enter LaMichael James.

Despite standing at a 'meager' 5-foot-9 and a shade under 200 pounds, the speedster has stepped up in a big way, on a big stage called the playoffs (A.J. Jenkins, you're officially on notice). In the last couple of weeks, James has received about one-third of Gore's carries which, as Gore alluded to this week, has helped keep Gore's legs fresh.

James poses the outside, around-the-edge running threat that Hunter did before his injury. There are two specific instances where I expect James to make a difference this Sunday: on kickoff returns and in pistol packages. Like Colin Kaepernick at Nevada, James had plenty of experience with a read option offense playing in Chip Kelly's offense at Oregon.

The third running back option is Mr. Do-It-All Anthony Dixon. There's something adulatory to be said about Dixon's story this season. With a crowded backfield of Hunter, James, and newly-signed free agent Brandon Jacobs, it seemed a sure thing that Dixon wouldn't even make the team. However, he persisted. Dixon asked for practice reps at the fullback position. He asked for practice reps with the special teams coverage unit. Dixon exemplified the altruistic, selfless team-first mentality that Jim Harbaugh preaches to the team every single day. And it paid off.

After it quickly became apparently that Jacobs was more concerned about composing incendiary tweets, he was essentially let go by the team. Dixon was subsequently elevated to take his place as the team's short-yardage back, and he's never looked back since. Good for you, Boobie. 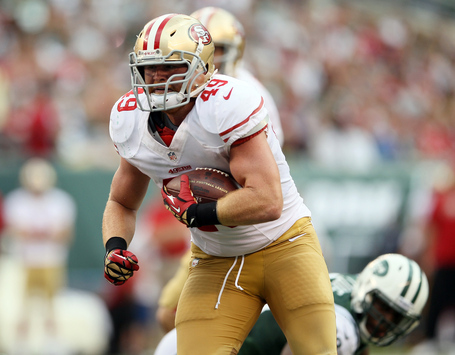 Perhaps the odd man out or the least publicized man in the San Francisco backfield is fullback Bruce Miller. Miller, who actually played as a defensive end at the University of Central Florida, has duties that extend beyond the stat sheet. His most important job on Sunday will be paving the way for Gore, James, and Kaepernick. Don't be surprised to see Miller in the Niners' pistol formation identifying and engaging unblocked defenders to open up paths for his fellow runners.

"I get to do a lot of different things, because I'm not just running downhill and hitting guys. I get to block and get in different schemes," said Miller. "I love this offense. I think we all take pride in being intelligent football players, so the more they can give us the more we can do, so we take pride in that."

If you're curious about Miller's biggest inspiration on the team, look no further than the guy he's blocking for.

"[Gore's] work ethic is inspirational. When you see him in the facility, the weight room and the practice field...Everyone knows he's a good football player on Sunday, but his work ethic the other times is what we see. He pushes everyone to be a better football player."

Much has been made of Kaepernick and the pistol offense, but don't be fooled. The bread and butter of the San Francisco offense is their running game, and the success of the team starts and ends with Gore. If the Niners can get Gore and James rolling in the ground game, their chances of bringing home number six increase tenfold.