Days away from Super Bowl XLVII, Niners Nation is breaking down the roster by presenting a position preview for the Faithful. Today, we take a look at the wide receiving corps featuring Michael Crabtree and Randy Moss. A.J. Jenkins? Not so much.

On Tuesday, I did a write-up about the San Francisco 49ers weapons in the run game. Today, we're talking about another crucial dimension of the Niners offense - the wide receivers - so let's get to it! 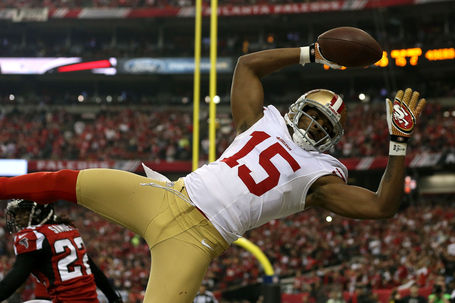 ATLANTA, GA - JANUARY 20: Wide receiver Michael Crabtree #15 of the San Francisco 49ers is unable to come down in bounds in the endzone in the second quarter against the Atlanta Falcons in the NFC Championship game at the Georgia Dome on January 20, 2013 in Atlanta, Georgia. (Photo by Streeter Lecka/Getty Images)

Statistics are statistics. Crabtree's numbers this season are impressive, no doubt, but if you really want to see what makes him so good, you'll have to turn on the tape.

Crabtree is such effective an receiver due to his ability to generate yards after the catch by eluding defenders and shrugging off tackles. The sooner Crabs gets the ball in his hands, the more time he has to work his magic, and with Colin Kaepernick's '94-miles-per-hour fastball,' he has plenty.

"With how bad I did last year, in my opinion, I feel like I didn't do what I was supposed to do," said Crabtree, after the regular season finale win against the Arizona Cardinals. "I feel like I get another chance. We're back again and ready to win."

Crabtree was undoubtedly referring to last year's disappointing NFC Championship Game loss to the New York Giants in which he recorded just a single reception for 3 yards - the only reception all day by a San Francisco receiver. So far this postseason, he's made good on his promise to do more for his team.

Just as the running back position was loaded before the season started, so was the receiving corps. However, both groups have suffered casualties as the season went on including Kyle Williams and Mario Manningham. The latter, in particular, was a pretty significant loss.

Manningham wasn't far behind Crabtree in terms of targets this season. What was most impressive? He only had one drop to 42 receptions. But all of this talk is in vein as Williams and Manningham are out indefinitely. 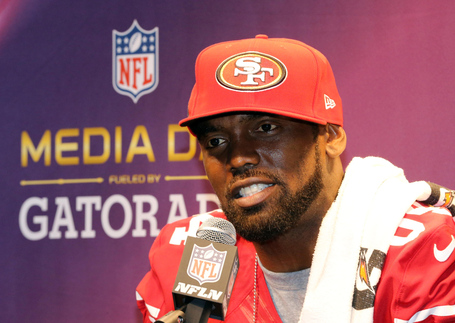 Randy Moss famously claimed on Tuesday's media session that he is the greatest receiver to ever play the game.

"Put my numbers up against his numbers," retorted Hall of Fame receiver Jerry Rice, after hearing Moss' proclamation.

I won't stir the pot, but if Moss means to back up his bold statement, he'll have an opportunity to do it on football's grandest stage this Sunday.

Moss has sprinkled in catches here and there this season, but for the most part, he hasn't made a huge impact statistically. With that said, the wily 35-year-old veteran has shown he can still take off deep, and to the Niners' benefit, opposing defenses have to respect that.

The last time Moss competed in a Super Bowl was five years ago when his New England Patriots fell to the New York Giants by a score of 17-14. Moss recorded five receptions for 62 yards and was the recipient of Tom Brady's only touchdown pass all game. Now in the twilight years of his career, the window is closing fast for Moss to win his first world championship. 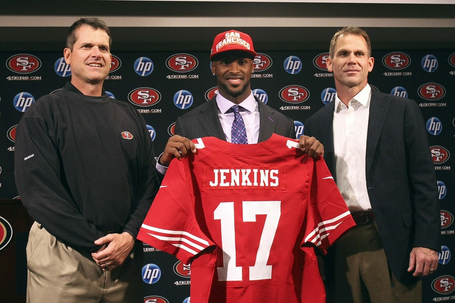 A.J. Jenkins' face might as well be plastered on the back of a milk carton, because we haven't seen this guy all season.

The Niners made Jenkins their first draftee last April by selecting him with the 30th overall pick. Despite playing in a run-heavy offense at the University of Illinois, Jenkins showed some promise in the preseason after recording four catches for 59 yards against the San Diego Chargers. But after suiting up for five games this season, Jenkins has exactly zero catches.

He kinda-sorta had an excuse with Manningham, Moss, and Williams all ahead of him on the depth chart early in the season, but with two out of the three now out of commission, Jenkins has still been disconcertingly quiet. Hell, Chad Hall was only promoted from the practice squad two weeks ago, and he's had more action lately than Jenkins. So has Ted Ginn. Ted...freakin'...Ginn.

I don't mean to be a pessimist, but Jenkins has been nowhere to be found all year, and there's no reason to believe he'll break out now. Don't expect Jenkins to be a factor at all this Sunday. Hopefully, he'll do something next season. 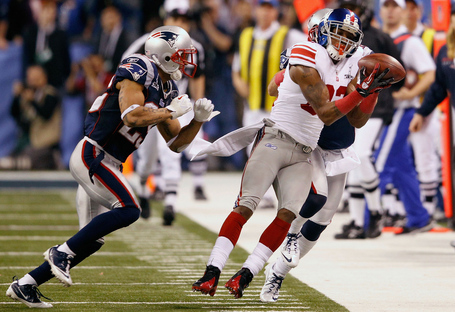 INDIANAPOLIS, IN - FEBRUARY 05: Mario Manningham #82 of the New York Giants makes a catch on the sidelines against Sterling Moore #29 of the New England Patriots for a gain of 38 yards in the fourth quarter during Super Bowl XLVI at Lucas Oil Stadium on February 5, 2012 in Indianapolis, Indiana. (Photo by Rob Carr/Getty Images)

The last couple of Super Bowls have featured a signature catch by a wide receiver - Manningham in Super Bowl XLVI and Santonio Holmes in XLIII. With marquee names like Crabtree, Moss, Anquan Boldin, and Torrey Smith, we may very well see another.

Who would you like to see make 'the signature catch' for the Niners?

Want to join the Niners Nation discussion? Register for free (no spam!). Make sure and follow us on Twitter @NinersNation and Like us on Facebook to get the full experience in what hopefully leads to Lombardi #6 in New Orleans!