Michael Crabtree had 8 catches for 172 yards and 2 touchdowns against Arizona - his biggest day of the year to cap the biggest regular season of his career. We break down a couple plays on the coach's film from his performance.

Share All sharing options for: All-22: Michael Crabtree's big day

Michael Crabtree has finally reached the coveted receiver milestone: 1,000 yards in a season. He is the first 49er to do it in a decade, since the days of Terrell Owens; and, more than most receivers in the league, Crabtree's 1,000+ yards have come in clutch situations.

Never garbage time stats, never compilation stats on a team that throws 40 times a game (or even 30 times a game) - Michael "Clutch"-tree's break-out year has consistently come at times when it was most needed: 3rd down.

Through the final 16th game of the season, Crabtree is tied for 5th with cumulative 3rd/4th down catches that acquired a 1st down, with 24; including 5 against Arizona in Week 17.

The receivers ahead of him? (All data below comes from first link above) Calvin Johnson, Brandon Marshall, Reggie Wayne, and Roddy White; with Victor Cruz tied at 24. All five men are legitimate #1's - among the best in the league; and all five play for pass-heavy teams.

The 49ers, conversely, have the least amount of passing conversions for a 1st down in the entire league, at 47. For reference, the Detroit Lions lead the league with 96.

So, yes, more than half of San Francisco's first downs through the air this year have come at the hands of Michael Crabtree - and with the losses of Mario Manningham and Kyle Williams, and with yet-unproven rookie AJ Jenkins lining up as well, Crabtree could not have picked a better time to become a legit #1 receiver.

Today, in honor of Crabtree's awesome season, and in honor of Colin Kaepernick's big play highlights, we are going to break down a couple deep passes from Week 17.

Against Arizona, Kaepernick to Crabtree was 3 of 4 on deep targets for 99 yards and a touchdown. Not bad. Here's a breakdown of the biggest play of the game, and Crabtree's biggest of the season. 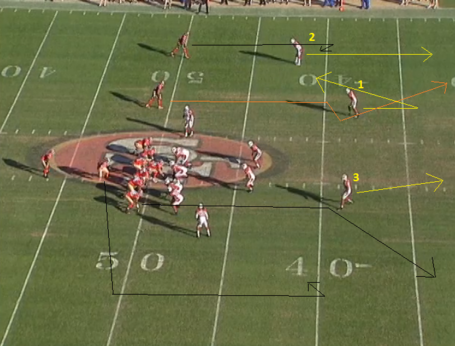 1st and 10 from just on the Arizona side of the 50. Crabtree is the orange route, running a fake post to corner.

Bruuuuuuuuuce Miller is in motion out of the backfield. Him and who I believe to be Randy Moss (very top black) are running identical routes: deep ins about 10 yards up-field.

The play design is meant to open things up for either Crabtree deep or Vernon Davis, who is running a corner over the top of Miller's route.

The Arizona defense is in complete zone coverage. The three important guys are numbered.

#1 is going to back up as if he is playing your typical Cover 2 deep, but then he will explode down to bite on Moss' in route. This leaves #3 all alone up top in the middle of the field, and it leaves #2 specifically responsible for Crabtree's corner. 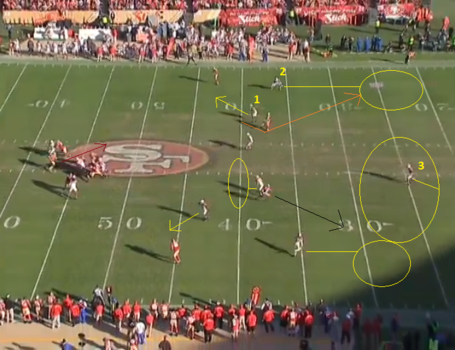 Woah boy! Lots going on here, but I wanted to give a more complete picture of the zone coverage.

To continue with the relevant bits, though, #1 is biting just now on the Moss in-route, since it is his responsibility to cover it. #3 is covering the middle and watching, first, what might be Crabtree's post and, second, Vernon's corner.

#2 is supposed to back up right now and watch for anything deep, but Crabtree's quick step or two inside makes him hesitate. If it's a post then he knows he has help inside. But it's not.

Kaepernick is going to elude some pressure up the middle and step up to where the red arrow is pointing. 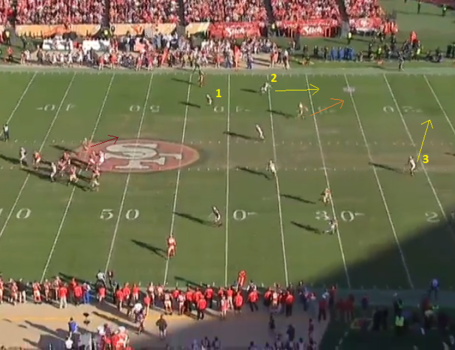 That gives us this. Kaepernick continuing to step forward and about to release the pass.

#2 is in no position to cover Crabtree's corner. He should have been back already. Notice, in both the above pictures, #2 is at the 36 - he has barely even moved; whereas Crabtree has already ascended from the 37 to the 31.

#3 is seeing the route and moving over to stop it, but there's really not much he can do. 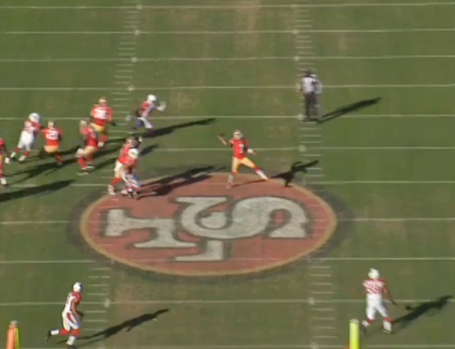 And here is Kaepernick as he releases the throw. One leg in the air, one on the ground, on the run, moving to his left, throwing with his right. He launches it 30 yards down field, plus the pythagorean solution of whatever distance it had to travel towards the sidelines to get there (a^2 + b^2 = c^2... so you figure it out!).

Either way, what a throw! It goes just over #2's outstretched hands right into Crabtree's arms/chest as he continues towards the endzone.

Here we have a 3rd and 11 from later in the 2nd quarter where Crabtree does what he's been doing all season. 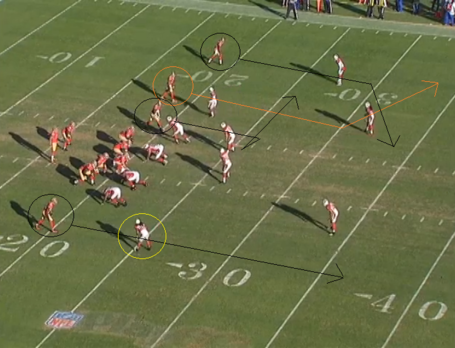 Crabtree (orange again) is running another corner. This time he's going to get some space created by who I believe to be AJ Jenkins, running a post. The two cross each other, causing again enough confusion for the DB over Jenkins that Crabtree is able to beat him outside.

The only one not in zone coverage (as far as I could tell) is the yellow circled gentlemen covering who I believe to be Moss. 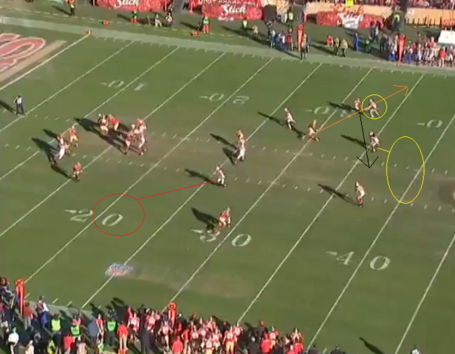 Here, the DB "on" Jenkins (yellow circle), is stepping inside to cover Jenkins when he needs to let that go and watch the outside route.

That small step or two in allows Crabtree and his momentum to beat the DB outside. As you can see, Arizona is playing zone everywhere on this play, with again only four men rushing. 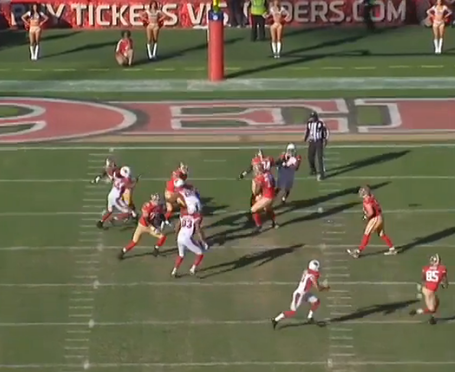 This final still I provide just to show the hit The Kid takes upon release of the football. The throw is a great one though, and Crabtree makes a spectacular, one-handed catch 16 yards down field, accruing 3 more yards of YAC and picking up another first down.

It feels nice to finally have a legitimate #1 and ww would all like to see lots and lots of this come playoff time: "The Kaep-Crabs Connection."