Ray Lewis is sporting an arm brace to support his previously torn right triceps muscle. Justin Smith is expecte to wear something similar. We take a look at it.

Baltimore Ravens linebacker Ray Lewis made his return from a triceps tear on Sunday, as he was able to play in the Ravens wild card round game with the Indianapolis Colts. Lewis sported a bulky arm brace on his right arm to support the surgically-repaired triceps muscle. This is pertinent to 49ers fans because according to Matt Barrows, Justin Smith will be sporting a similar brace on his left arm next week. Here is a quick look at what Lewis is wearing 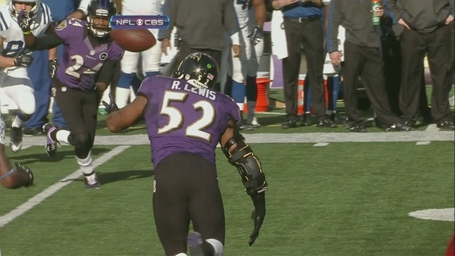 It will be interesting to see how Justin Smith is able to operate with such a brace. There is still not 100% guarantee Smith plays next week, but his return to practice this week is a significant step forward. He likely would have been listed as "limited" on Thursday and Friday, but that is a sizable improvement from not participating, as was the case the previous two weeks.

The 49ers do not have to release their first practice participation report until Wednesday. I imagine we'll hear from Coach Harbaugh before then, but I would not expect any further details. Smith will likely be listed as questionable when the final injury report comes out at the end of the week, but I have to think he is active next Saturday.