49ers vs. Packers: Frank Gore and the San Francisco rushing attack via All-22

We take a look at Frank Gore's off day against Arizona and what it might mean moving forward for Saturday's Divisional bout with Green Bay.

Share All sharing options for: 49ers vs. Packers: Frank Gore and the San Francisco rushing attack via All-22

As we head into Saturday's Divisional Round match with the Green Bay Packers, we will be taking a look at any and all things All-22. If you have any suggestions or thoughts on what you might want us to examine in the next 5 days, feel free to use this post as an "open thread" to do so.

49ers-Packers Playoff History | 49ers Kicker Competition Update |
Are the Packers Ready for the Read-Option? | Your Divisional Round Announcers |
49ers vs. Packers: All You Need To Know

Today, we start with a brief examination of the running game.

Part One - Running the Ball

Against Arizona in Week 17, Frank Gore got off to a slow start, as did the entire offense. The first three drives of the first quarter were all three-and-outs, with Gore having three runs of a yard or less, and one run of 7 yards on a 3rd and 8 draw play against a soft front.

Early in the game, the Cardinals were cheating DBs over to the inside just before the snap to lend more run support. Gore cascaded against 8/9/10 men fronts on his early runs and went nowhere.

In the relevant frames, I have circled the cheating DB (yellow) and drawn a line for the new defender responsible for the San Francisco receiver. 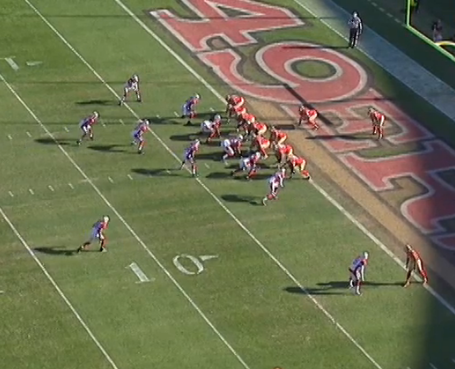 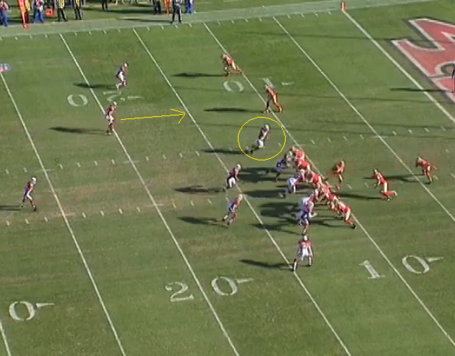 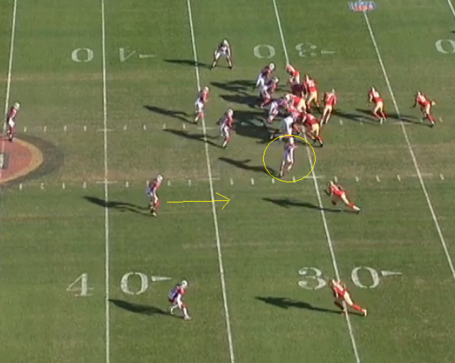 When Colin Kaepernick did back up to throw in these situations, against the early stacked boxes, he was inaccurate on some short throws and otherwise not helped out much by the hands of his receivers/tight ends.

It might be safe to say the whole offense came out a little flat. Luckily, the defense did not; and they kept San Francisco in the game until Kaepernick-to-Crabtree could get going.

The most success Gore had running early was on a counter pull to the weak side of a very heavy run formation, but even that required Gore to dance a bit and dodge a defender just to pick up 4.

Still, the 49ers must have seen that maybe dancing was necessary, so they went ahead and brought in LaMichael James on the next play to run a sweep counter, again pulling an extra linemen (Joe Staley) to the right side to help out.

James picked up the first 8 yards untouched thanks to a nice block by The Kid which allowed Staley to continue out in front, otherwise this play could have gone for less.

Once James was out in the open field, magic happened. He juked and side-stepped his way another 18 yards for a play that, for at least a moment, opened things up. It is an example of the fact that, contrary to what most of us definitely thought last year, Hunter is not the change of pace back.

Hunter is Gore's replacement as they have steadily groomed him into an inside runner who is patient and follows his blocks well, but still has that youthful speed Gore is lacking. LMJ is emerging as the outside the tackles, change of pace back.

The 49ers followed LMJ's run with a quick slant to Crabtree inside who, having beat his man one-on-one, took the pass for a little bit of YAC and gained 17. It was a preview of things to come.

San Francisco followed that up with this play: 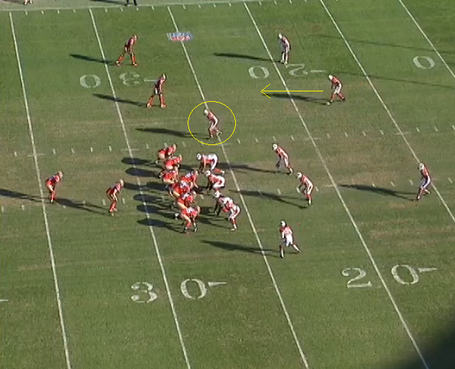 Again, the DB (yellow circle) cheats inside, leaving Moss open as the safety steps forward to pick him up. This play goes for a whopping two yards.

On whole, Gore had 9 runs for 20 yards in the first half, and that includes the aforementioned meaningless 7 yards he picked up on a 3rd and 8 draw play. So, really, he went 13 yards on 8 carries.

Gore finished the day with 11 more runs for 48 yards, averaging a much more respectable YPC of 4.36. So what changed in the second half?

Sadly, not much. The play-calling did not really change, nor did it need to. Arizona loaded up the box all game long. However, the "inconvenient truth" is that Gore is a great back and our offensive line is the best (or second best) rushing line in the league. Eventually, they are going to get their yards: Gore had 24 of 'em on three plays late in the 3rd on a crucial drive that sealed the game thanks to a broken tackle here and there, and some great second-level blocking.

But the reason we beat Arizona had nothing to do with Frank Gore.

On Saturday, we took a look at Michael Crabtree's big day in the passing game. In the first play of that post, we again have a cheating DB trying to take advantage of any possible run, but Kaepernick and Crabtree make him pay for it.

Ultimately, we beat Arizona because of a stout defense and some clutch passing by The Kid to Crabtree, who was giving Patrick Petersen and the other Arizona defenders fits all day long.

And that's really all that matters. If a team wants to load the box all day long and cheat on coverage, you have to beat them with the passing game. Against St. Louis (the second time around), we failed to do that. Against Arizona, we did it very well.

So how much luck will Green Bay have by loading the box? Hopefully, if Kaepernick-to-Crabtree goes off again, it won't matter.

Adrian Peterson had 210 yards on 21 carries in one game against Green Bay and 199 yards on 34 carries in the other. Which one did they win? The second one. Why?

Because somewhere, lost in the Peterson record-chase and his historic season, is the fact that Christian Ponder had his best game of the season in Week 17 against Green Bay, going 16 of 28 for 234 yards, 3 touchdowns, and 0 interceptions. Good for a Y/A over 8 and a ANY/A over 10.

Contrast that with Ponder's first game against the Packers, where he had 25 attempts for 119 yards with 1 touchdown, 2 interceptions, and a ANY/A below 2.

Even further, contrast that with what Joe Webb just did. 11 of 30 for 180 yards with 1 touchdown and 1 pick. It might be slightly better stat-wise, but it's equally inefficient in terms of what is needed to win a game.

Webb looked utterly lost at times on Saturday against Green Bay. Pro Football Focus graded him a -7.6 in the passing game; and though Peterson managed a more-than-respectable (though hardly epic) 99 yards on 22 carries, it was not enough to win a game thanks to the day back-up Joe Webb had.

If Gore goes 99 yards on 22 rushes, we will win this week. Why? Because Kaepernick is a better quarterback than Ponder and Webb, and Crabtree is a better receiver than the men Minnesota had lined up on Saturday.

So feed the ball to Gore. Let Green Bay stack the box if they want to and just keep feeding it to him. Because the inconvenient truth is, eventually, Kaep-to-Crabs will be unleashed.