49ers vs. Packers: Breaking down Joe Staley vs. Clay Matthews from week 1

Share All sharing options for: 49ers vs. Packers: Breaking down Joe Staley vs. Clay Matthews from week 1

With the 49ers facing the Packers this Saturday in what will be a re-match of the week one affair between the two teams, I thought I'd go back and look at one of the story lines from that game back in September: Joe Staley vs. Clay Matthews.

As you may recall, Staley gave up 2.5 sacks and several pressures to Matthews in this game. Granted the former had what appeared to be a bloody, broken nose the entire game, Staley said today that it was no excuse, and that it was "a technique issue".

Taking a look at the game again, he is right about the technique flaw. We'll have to come up with a name for this "move" that he keeps trying on Matthews, of course I hope we never see it again and quickly forget what we even called it...Anyway, on to the breakdown.

49ers-Packers Playoff History | 49ers Kicker Competition Update |
Are the Packers Ready for the Read-Option? | Your Divisional Round Announcers |
49ers vs. Packers: All You Need To Know

First sack: Early in the first quarter, 13:36 left. Staley doesn't get his hands on Matthews off the snap, instead let's the defender get hands on HIM first and is driven back by the bull-rush. Tries to anchor and lowers his upper body, but he's overextended forward, past his center of gravity. Matthews dips inside and Staley, with the defender no longer helping to prop him up, falls down basically on top of Alex Smith as Matthews arrives at the QB's feet, too.

What was originally credited as a half-sack early in the third quarter (13:25) doesn't look like it should have been attributed to Matthews at all (which explains why it was later changed). Staley handles the defender and Mike Iupati even comes in and gives him a shot as Alex Smith is sacked by Charles Woodson. Perhaps Matthews' presence forced Alex Smith to move off his spot slightly, but it was maybe one step forward and he wasn't touched by Matthews at all.

Another half-sack with 3:28 left in the third quarter. This time it was mostly Matthews, who came around the edge and got Alex 90% on the ground, but Woodson touches him to make him fall the rest of the way. Staley stopped his feet and tried to use his arms to stave-off Matthews, who continued up-field and around the corner. Staley tries to lunge, but he's already beaten at this point. This play illustrated the "special move" Staley kept trying on Matthews that never worked. 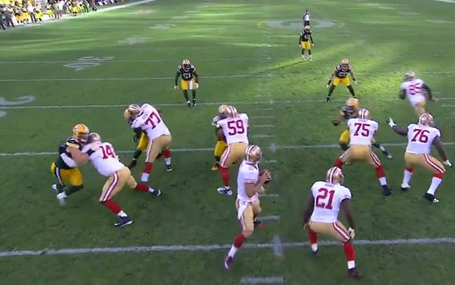 Kinda looks like a hug. Move your feet, Joe.

The last sack in the fourth quarter (4:01) was more of the same from Staley. He kicks out a few times but then sort of stops and moves his arms in as though he were doing the butterfly press at the gym...Meanwhile Matthews keeps moving around the edge and Staley can only lunge at him after he's beaten.

Here he is, clearly he needs to keep slide-stepping to his left, but instead he's about to engage "the claws of death" on Matthews, who could care less.

I'm not sure why but Staley never kept his feet moving in this game, instead favoring the sort of Mortal Kombat, muscle-flexing, crab-claw-like motion with his arms in hopes that his sheer strength would stymie Matthews. The latter paid this fancy little move no mind and just kept on trucking past the now flat-footed lineman.

Whatever that move was, I hope it's long since been retired by Staley. We should still come up with a name for it...suggestions?