On this very special playoff edition of The Booth Review …err… PREview…I take a look at how both the San Francisco 49ers and Green Bay Packers have changed their game since Week 1. Who has stepped up? Who has fallen to the wayside? What can we expect to see this Saturday? Read on, 49ers Faithful.

A lot of things can change in four months, and a lot has changed.

When the San Francisco 49ers traveled to Lambeau Field in Week 1, they left with a 30-22 victory over the Green Bay Packers. The two teams meet once more this Saturday for the Divisional Round of the playoffs, but this time around, it'll be in the Niners' backyard. As such, you might feel the odds are stacked heavily in favor of San Francisco; I'm here to tell you it might not be so easy.

The most obvious change-up for San Francisco has been at the quarterback position. Alex Smith started the regular season opener and played a phenomenal game. He completed a remarkable 77% of his passes for 211 yards and a pair of touchdowns. However, these are all moot points as the Niners have moved to Colin Kaepernick as their signal caller.

Much has been made of the Packers' inexperience defending the pistol option offense that the Niners so heavily employ with Kaepernick, and it's true. The last time Green Bay faced the option was Week 3 against Russell Wilson and the Seattle Seahawks - a match that the Packers lost. Perhaps the biggest quandary then for Green Bay's defense will be how they respond to an offense that's more or less foreign to them. The Packers have plenty of speed at the linebacker position, and it will be a valuable asset if they want any chance of defending the run option successfully. 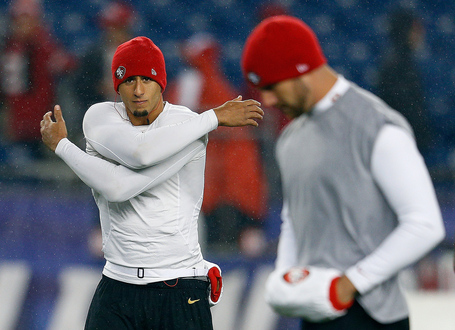 It's no secret that Kaepernick is a threat on his feet. That's what makes San Francisco's implementation of the pistol offense so effective. In Week 1, there were a few moments where Smith was flushed out of the pocket and forced to make a run for it. Having watched Kaepernick for the last eight games, it was a bit of a shock to the system to see Smith running so slow - and Smith is not slow by any stretch of the imagination.

Again, the biggest question mark will be how Green Bay defends the most effective dual-threat quarterback they've faced all season. If they let Kaepernick run wild, chances are, he'll carve them up through the air as well.

The lovely Mindi Bach, of Comcast Sportsnet Bay Area, was featured on NFL Network on Monday morning to offer insight on this weekend's match-up. Her biggest concern for the Niners is their ability to come back from behind in the event that the Packers jump ahead early in the game. Her statement rings uncomfortably true.

After engineering five come-from-behind victories last season, the Niners have exactly zero this season. In almost all of their wins, they were able to put points on the board early and play with the lead which was precisely the case in Week 1 against the Packers. At one point in the third quarter, they had a comfortable 23-7 lead. I don't think they'll be afforded such a cushion on Saturday. 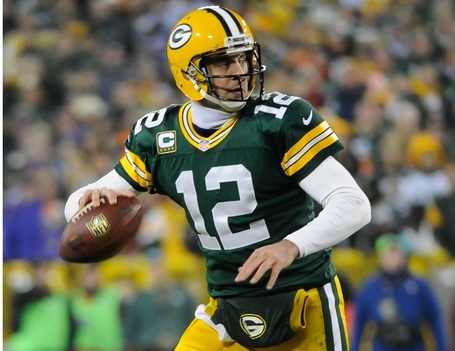 Aaron Rodgers took home MVP honors last season, and while he got off to a slow start in 2012, he only got hotter and hotter as the regular season went on. Take a look at the following stats:

Against San Francisco in Week 1, Rodgers played almost exclusively out of the shotgun, especially early on. As with any shotgun-heavy offense, the quarterback is afforded the ability to make quicker throws, but it also means the opposing defense is licking their chops as they're expecting the pass. Lately, however, Rodgers has been playing directly under center and dropping back more often.

In Week 1, Rodgers and the Packers offense faced a 3rd and 11 situation in the first quarter. San Francisco sent seven rushers after Rodgers, who was in a shotgun formation. It was cornerback Carlos Rogers who came off the slot receiver and around the edge to bring down the quarterback. If the Niners want to slow down the Packers' passing attack, they'll have to get creative on defense and keep Rodgers thinking. Only the Arizona Cardinals have allowed more sacks this season than the Packers, so it's certainly doable.

Michael Crabtree had n stellar regular season posting career-bests in every category, and it all started at Lambeau Field. In Week 1, Crabtree was the team's most-targeted receiver (with 9) and had 7 receptions for 76 receiving yards. In Week 17, Crabtree remained, far and away, the team's most integral receiver with 13 targets, 8 receptions, and 172 receiving yards...oh, and a pair of touchdowns.

Kaepernick loves throwing to Crabtree. They seem to only elevate each other. 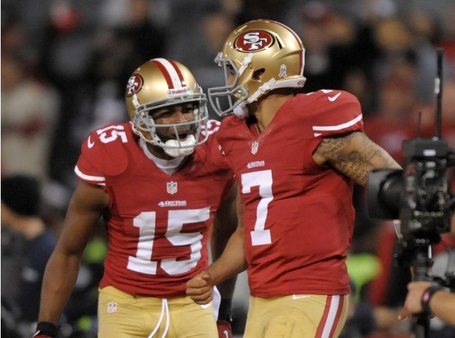 After Crabtree, San Francisco's most reliable receiver was Mario Manningham before he tore the ACL and PCL in his left knee on December 23rd against the Seahawks. The injury hurt quite literally, but figuratively as well. The absence of both Manningham and Kyle Williams caused a ripple effect on the Niners' receiving corps. What was an area of strength and depth is now stretched dangerously thin.

Rookie receiver A.J. Jenkins, selected with San Francisco's 30th overall pick last April, needs to step up to the plate. Jenkins' stat sheet looks absolutely barren right now. The rookie has only suited up for three games and been targeted once, but his single target was on a pivotal third down situation, and Jenkins let the softball slip right through his fingers.

The other thing...where the hell is Vernon Davis? The former Pro Bowl tight end has virtually fallen off the face of the earth. After recording four touchdown receptions in the first three games of the season, Davis has just one since then. I understand that Davis draws attention from the defense just by being on the field, but that won't be enough in the playoffs. Delanie "Droptimus Prime" Walker won't be enough in the playoffs. If Davis can reprise his role as a play maker, the Niners gain an additional dimension to their offense.

Paging A.J. and Vernon. We need you guys.

Both the Niners and Packers have experienced losses and gains in the backfield.

In Week 1, Green Bay's only rusher, excluding Rodgers, was running back Cedric Benson. In short, Benson was pretty unimpressive and completely ineffective against San Francisco's sturdy run defense. He finished the day with 9 carries for 18 yards (2.0 yards per carry) and no touchdowns. Benson eventually sustained a foot injury against the Indianapolis Colts on October 7th and would undergo season-ending surgery. 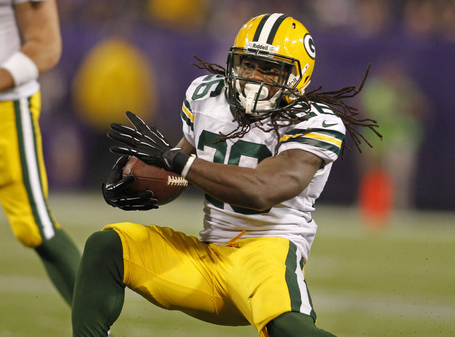 The Packers saw marginal success from James Starks and Alex Green before settling on second-year journeyman DuJuan Harris. After going undrafted in 2011, Harris was signed by the Jacksonville Jaguars as a free agent before being released earlier this year. He spent some time with the Pittsburgh Steelers before being signed to the Packers' practice squad. The week before prior to landing in Green Bay, Harris was selling cars at a Jacksonville Chrysler-Jeep-Dodge dealership. But don't be fooled; Harris is no slouch.

In five games, Harris averaged 4 yards per carry on 51 carries. In last week's Wildcard victory over the Minnesota Vikings, Harris had 17 carries, the most in his career. We can expect him to be Green Bay's primary workhorse in the ground game. Harris also had 5 receptions for 53 yards last Saturday, another career-high.

In Week 1, Kendall Hunter was used to spell Frank Gore quite a bit on third and even second downs. Hunter, a shifty change-of-pace runner, was the perfect complement to Gore, a heavy hammer between the tackles. However, Hunter was lost for the season coincidentally on the same play that Kyle Williams suffered his season-ending injury. But as they say: when one door closes, another opens.

The door opened alright, and LaMichael James blew right through it. 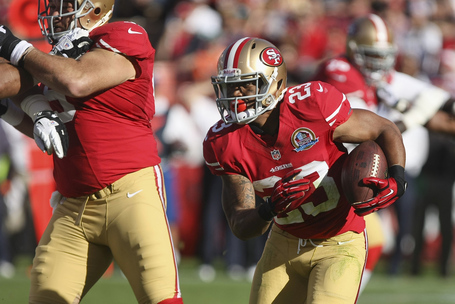 Tasked with filling Hunter's role as a running back reliever, James has performed admirably. The former Oregon Duck provides the Niners offense with a rare blend of speed and acceleration akin to Darren Sproles of the New Orleans Saints. James has exhibited, on many occasions, the ability to cut it outside of the tackles. However, what impresses me the most about James is what he does on kickoff returns.

Hunter, in eleven games, has only brought out 7 kickoff returns for 165 yards and a long of 31 yards, an average of 23.6 yards per return.

Not only does James show a greater willingness to take out kickoffs, he also produces better results and provides the Niners with better starting field position with his explosiveness. San Francisco's offense needs to either set the pace against Green Bay or keep up with it. Either way, Kaepernick and company will benefit exponentially with a shorter field.

I can't claim to know what will happen this Saturday. The best thing I can do is guess and hope for the best. One thing that's certain is that playoff football returns to Candlestick Park for the second consecutive year. It's exciting, for sure, but this time around, there's as much excitement as expectation. It feels a bit different, doesn't it? We're not the same "nothing to lose" team from a year ago. This year, we're "do or die." I think the team has the same bitter taste in their mouths as we all do.