We take a look at Billy Cundiff's first kicking experience at Candlestick Park, and look at field conditions.

For the first time in his career, newly signed 49ers kicker Billy Cundiff got a chance to kick some field goals at Candlestick Park on Monday. The 49ers signed Cundiff last week to compete with David Akers and hopefully provide some measure of stability at the kicking position. Of course, working out kickers during a playoff bye week is the very definition of instability.

Naturally, Cundiff was fairly confident in how his workout went. Akers did not make the trip as the coaches already know what he can do in Candlestick, both good and bad. That left Cundiff to reportedly kick approximately 40 field goals from different ranges.

Speaking of Cundiff's workout, the performance also apparently resulted in some photos of Cundiff and the 49ers field. Unrelated entirely to the kicking competition, this is pertinent because of the criticism of the Redskins preparation of FedEx Field last Sunday. Robert Griffin III aggravated his knee injury (reportedly a torn ACL and LCL), and Seahawks defensive end Chris Clemons also tore his ACL. This comes a year after Adrian Peterson tore his ACL on the same field.

The NFL apparently requires a certification of field fitness 72 hours in advance of a game. If the field is not "in compliance with Recommended Practices for the Maintenance of Infill and Natural Surfaces for NFL Games", the 49ers are required to get it there or face discipline from the league due to competitive and player safety issues.

The picture above obviously shows a problematic playing surface. Normally I would not think much of it, but in light of the FedEx Field issues, one has to wonder if more of the national media will pick up on it.

In light of that picture, I thought I'd look at a few other pictures. The first picture below is from the start of the 49ers Week 17 game against the Arizona Cardinals. The surface looks better than in the picture above (received from our man, the Bay Area Sports Guy), but obviously is still not ideal. 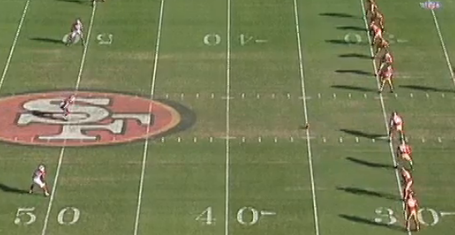 This next picture is from last year's Divisional Round matchup against the New Orleans Saints. The field looks greener, but I also imagine the sun and clouds were probably a little bit different. However, the middle of the field does seem cleaned up compared to the above pictures.

Does this mean anything? Well, no, not really. Adding in some fresh sod does not mean it will be perfectly fine. The Oakland A's have an issue in dealing with the Oakland Raiders at the Coliseum. The Raiders east bleacher seats cover left-center to right-center field, killing the grass underneath for the days they are out. The A's grounds crew adds in new sod when the bleachers come off, but it is still somewhat like playing on cement out there.

The 49ers will likely add some kind of fresh sod and generally try and clean it up by Saturday. However, it will likely get mucked up pretty quickly. It's just one more reason that I cannot wait for construction to finish on the new stadium.