49ers wide receiver A.J. Jenkins received an extended opportunity to play in the 49ers Week 17 win over the Arizona Cardinals. We take a look at some of the game film to see what he did well, and where he can improve.

Share All sharing options for: A.J. Jenkins All-22 review: 49ers vs. Cardinals

Over the last week, there have been several requests from people wanting to see some all-22 footage of 49ers rookie wide receiver A.J. Jenkins. He has not spent much time on the field, but in Week 17 against the Arizona Cardinals, Jenkins had a season-high 19 snaps, which was good for 28% of the offensive plays.

It was not exactly a memorable game for Jenkins, as his one target was a dropped pass. He also did not understand a play-call in the second quarter, resulting in several players telling him to move from the left side of the line to the right side of the line, and then pull back from the line of scrimmage.

In going back over the coaches' film, there are a few things of note related to Jenkins, but it also provided some details on other players that I thought were worth noting. So, consider this sort of a mix of topics, with A.J Jenkins bringing it all together.

First off, I figured I'd at least take a look at the dropped pass. It was the most prominent play of his day, and while in the end it didn't tell us much about Jenkins, it did provide a glimpse of Vernon Davis' value. My mark-ups of the screen-shots are not as clean as the phenomenal work liberty_JAC does, but hopefully you can live with it.

This play happened at the 4:10 mark of the first quarter. A.J. Jenkins is the red circle, Vernon Davis is the white circle, Crabtree and Moss are the black circles. The blue circle is the cornerback covering Jenkins, and the yellow circles are two more Cardinals defenders. 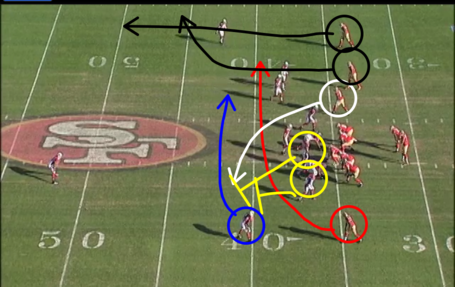 As the picture above shows, the 49ers ran a pair of familiar crossing routes with Davis and Jenkins. The two yellow defenders dropped back and would eventually double on Davis, while the blue defender followed Jenkins. 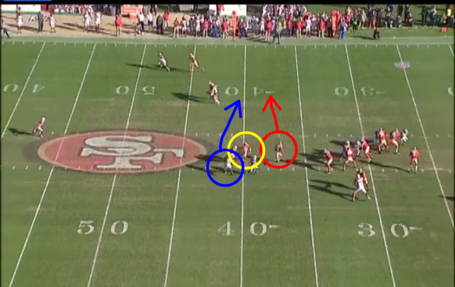 This next picture above shows Jenkins (red) and his defender (blue), and Davis and his two defenders (yellow). It's not a great view, but the two yellow defenders can be seen blocking the route of the blue defender. I'd have player names, but jersey numbers were tough to figure out on the film. 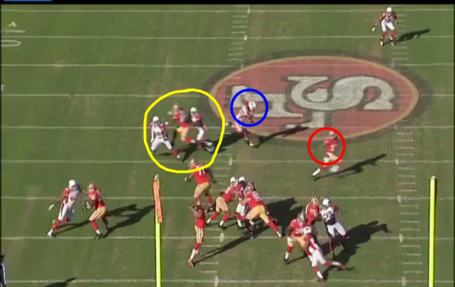 This next picture above provides the better angle on the double-team. This is the TE-to-TE camera from the end zone. As you can see, Davis is double-teamed, and Jenkins cover man got bumped as he made his way around. A.J. Jenkins would have had an easy first down, but unfortunately he dropped the pass. The pass did have a little mustard on it, but Jenkins has to catch that ball.

For much of the day, the Cardinals cornerbacks were playing off Jenkins. However, there were a couple plays where they ran some bump-and-run on him. This play below is one basic example. 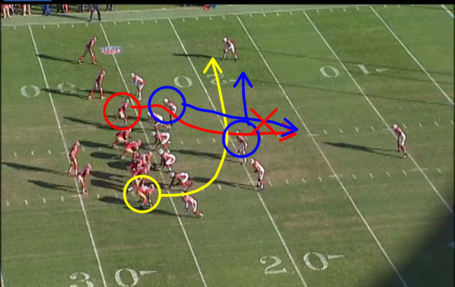 Jenkins (red) was lined up just off the left tackle and ran a route up the middle. On the bottom of the screen, you see Vernon Davis (yellow), who ran a crossing route once again. Jenkins and Davis did not hit each other, but Jenkins tried to split the two defenders (blue), and proceeded to slip and fall on his butt. Colin Kaepernick was sacked on this play, although he did have an open Vernon Davis he probable could have hit.

All was not awful though. We did see a few good routes from Jenkins. Receivers should be able to run all of their routes well, but it seems like we'll have to take what we can get from Jenkins for now. Below is a play that resulted in a first down on a great catch by Michael Crabtree. 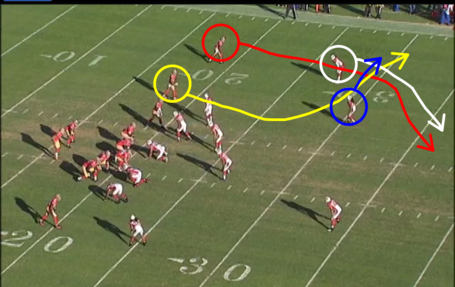 As the picture above shows, Jenkins ran a post route, while Crabtree ran a corner route. Although Jenkins was only being defended by a single receiver, the play was designed to create a natural pick on Crabtree's defender. These next two pictures aren't great, but you can sort of see the pick being set. The red circle is Jenkins, the yellow circle is Crabtree, and the blue circle in the second picture is Crabtree's defender. 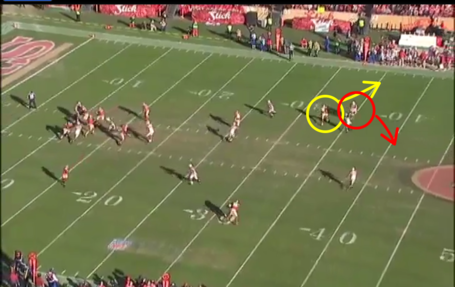 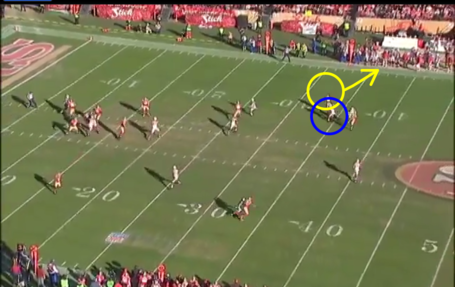 This last play came at the 11:15 mark in the third quarter, on 3rd and 7. The result of the play was an incomplete pass to Randy Moss. 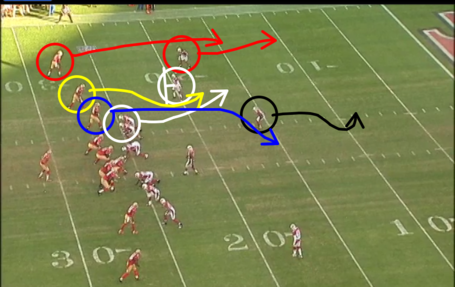 A.J. Jenkins ran (red) what amounted to a go route, and once again you can see the defender playing back deep on him. 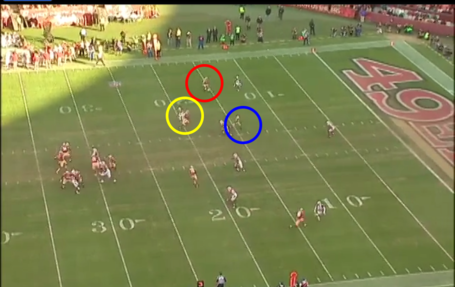 I took this screenshot just as Colin Kaepernick was winding up to throw the pass to Moss (yellow). It's not the best of shots, but to Moss' left is a defender. Vernon Davis (blue) is running a ix of a cross and posting pattern, although it might have been a lazy cut on an in-route. Whatever the case, on the left edge of the blue circle, you can make out a Cardinals defender. That defender left Gore and made a move toward Moss. Kaepernick fired it over Moss and it was incomplete.

On this particular play, if Kaepernick waits a split second, Jenkins would have been open. Additionally, the safety on the top right side of the screenshot (no circle around him) started making his way toward Moss as soon as Kaepernick started to throw the ball. A pump fake would have bought a split second to allow Davis to get further open, and keep the safety out of position. It's obviously all in the heat of the moment, but just one more thing for Kaepernick to work on moving forward.

This really doesn't tell us a whole lot about A.J. Jenkins because there really wasn't a whole lot to take from the All-22. He had a significant mix-up when he didn't know the play at the line of scrimmage, and a GIF might have been helpful for that. But if you saw the game, there was no mistake that he was confused. Other than that, defenders played off him for much of the game, which kind of surprised me given that he is not the biggest receiver out there.

As the 49ers prepare for the Green Bay Packers, there has been plenty of discussion about how Jenkins needs to step up with all the wide receiver injuries. While that would be nice, I do think the 49ers can win the Super Bowl with a minimal contribution from Jenkins.

He needs to perform the basics of his position, but even with the injuries, they are in better shape than last year. There remain questions about Vernon Davis, but he remains a valuable contributor, and a guy who can bust out at any moment. Delanie Walker is 100% healthy, and Randy Moss is still dangerous and keeping defenders aware of his presence. I'd love to see Jenkins bust out with a solid couple of games in the postseason, but in reality, I think the 49ers can do fine with him just being on the field and being moderately competent at his job. I realize that is not the most inspiring of sentences.