"If a link gets taken out of the chain, someone has to step up."

Welcome back to The Booth Review. The San Francisco 49ers finally got their rebound in a decisive 35-11 rout against the St. Louis Rams on Thursday night. But was it enough to put doubts to rest?

The fourth game of the regular season rarely carries so much significance. But for the San Francisco 49ers, a victory in St. Louis was paramount. As a team that many pundits pegged as Super Bowl-bound before the season even started, San Francisco had looked like anything but championship-caliber, having dropped the last two bouts in humiliating fashion.

With every offensive miscue, dropped pass, penalty flag, fumble, interception...we watched the light grow dimmer, the prospects of playoff reprisal fading fast. Even without media-imposed expectations, the Niners knew they had plenty to prove heading into the Edward Jones Dome on Thursday night. 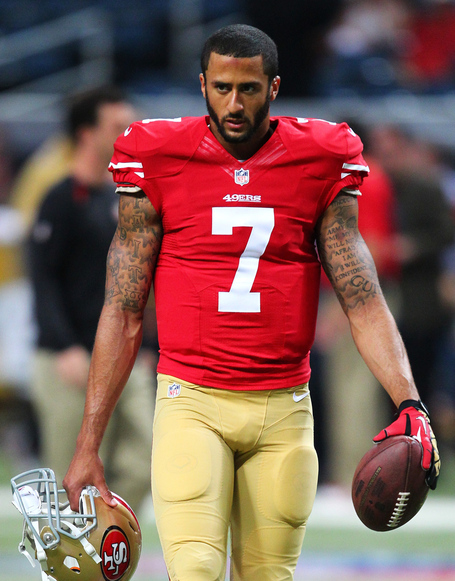 You could see it in the rabid, fiery eyes of Colin Kaepernick as he paced around the hallway just moments before kickoff - a snarling pit bull ready to be unchained.

"We knew we had to win," said Kaepernick, in his usual succinct manner of speaking.

After a dazzling season debut victory over the Green Bay Packers, San Francisco's offense devolved to complete dysfunction in the following weeks. The running game never picked up steam, and the passing game eventually failed as well. But on Thursday, we saw what was undoubtedly San Francisco's most balanced offensive attack so far this season.

About halfway through the second quarter, Kaepernick and the offense faced third-and-ten. Kap dropped a picture-perfect pass over a leaping Cortland Finnegan and into the arms of Anquan Boldin for a 42-yard reception and a first down.

Just two plays later, it was Boldin again who would make a sideline catch before making a herculean dive into the end zone for the first touchdown of the game.

"I know that if he gives me that much room, I'm definitely going to win." - Vernon Davis

Vernon Davis, who was ruled out of last week's game due to a hamstring injury, returned on Thursday night to wreak havoc against the Rams. On a third-and-two play in the red zone, Davis broke free into the paint to make another scoring reception.

Kaepernick wasn't the prolific passer that he was against the Packers secondary, but he was opportunistic, striking when the Rams were most vulnerable. He finished the day with 15 of 23 for 167 yards and a pair of touchdowns. 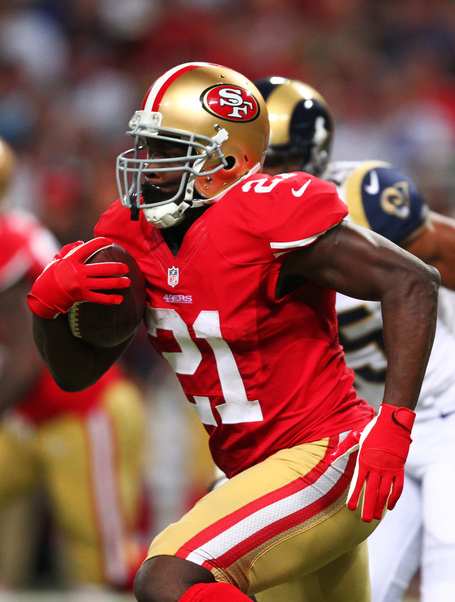 However, all of the success through the air would not have been possible without the help of San Francisco's 'Rushing King'.

"For the running game to open up the way it did, that's something we've been missing," said Davis. "It couldn't come at a better time. I love it, the team loves it, and I know the offensive line [is] probably jumping for joy right now. It's just a great thing to see."

Make no mistake about it - Frank Gore had a big day on the ground as he carved up the St. Louis defense for 153 yards and a rushing touchdown. His lone score of the night, by the way, was the 14th of his career against the Rams and the most by any back against the Rams ever.

Gore showed a little bit of everything on Thursday night. He was patient when he needed to be and decisive when the hole was open. He showed impressive bursts of acceleration around the edge and tucked his head in to grind between the tackles.

If you happen to have a friend who, for whatever reason, has never seen him play before, this would be the perfect game tape to show them precisely why Gore is one of the greatest backs in Niners' history.

"I just want to win. The 49ers are all about winning." - Frank Gore

If you happen to think Gore's been running on his last legs at the age of 30, I've got news for you: He doesn't care what you think.

"As long as I have a great offseason, and I know that I train hard, I know that I'll be fine," said Gore. "I don't care about the age thing. That kind of motivates me and keeps me going.

"I just want to win. The 49ers are all about winning. Whether it's running or throwing, all we worry about is winning."

My two cents? If the Niners want to sustain their offensive success and keep winning games, they need to continue establishing the running game. For years, San Francisco's bread-and-butter has been Gore and the ground attack. We've all seen how decrepit the offense becomes with a lack thereof. It's not impossible to win with just Kap's arm, but it's a hell of a lot harder.

Patrick Willis is often trumpeted as the proverbial heart and soul of the San Francisco defense, but he was sidelined with an injury. Instead, it was his counterpart that earned the most impressive performance of the night. 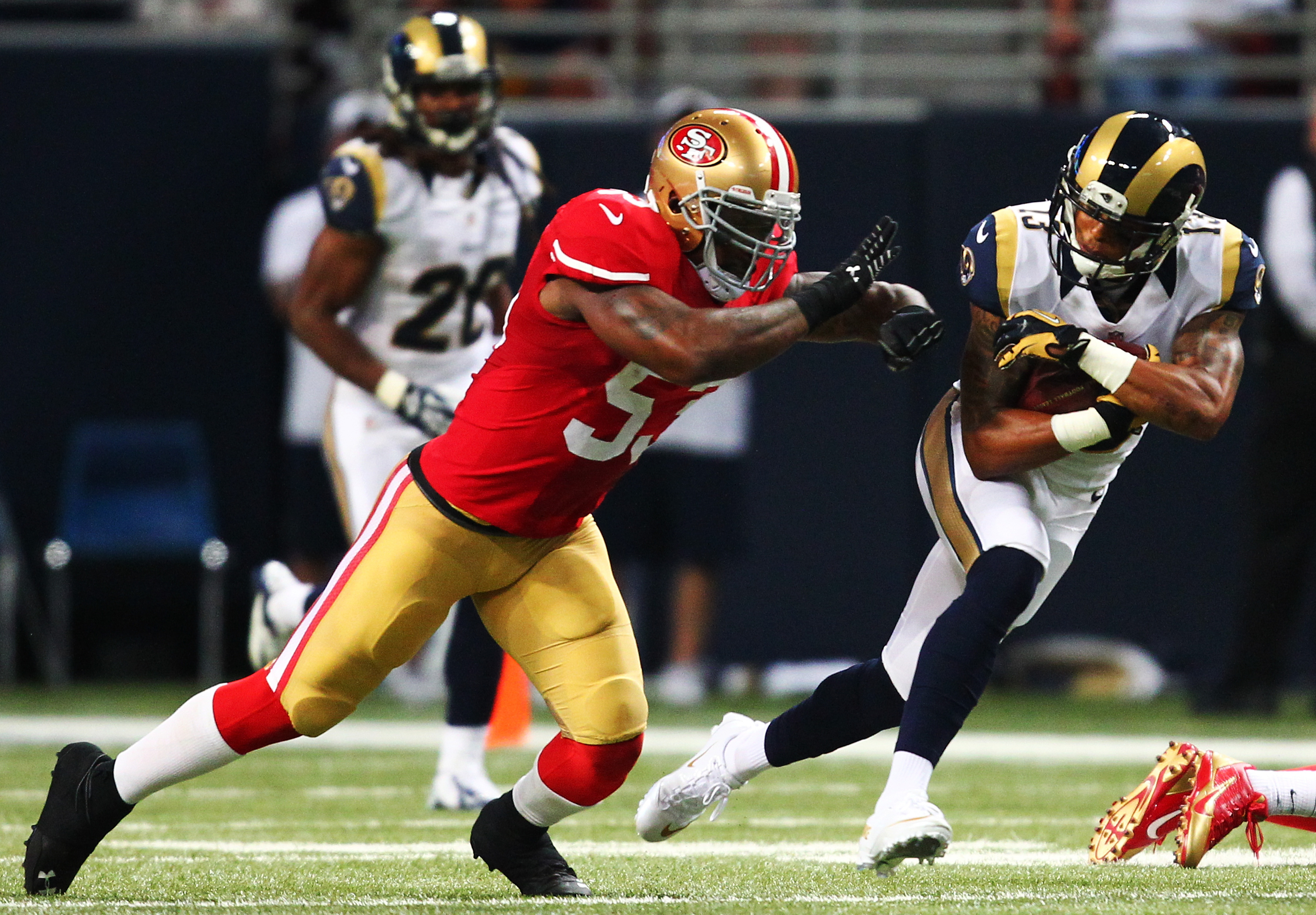 It's a tired expression, but as God as our witness, it really did seem like NaVorro Bowman was everywhere on the field.

I could devote an entire piece detailing Bowman's awe-inspiring performance, but I'll leave it there.

"If a link gets taken out of the chain, someone has to step up. Being a veteran guy, you have to think like that if you want to be the best. - NaVorro Bowman

Bowman appears to be a much more natural pass-rusher than 'big brother' Patrick Willis, and defensive coordinator Vic Fangio definitely took notice. Fangio dialed up the same blitz for Bowman at least a handful of times, and they were all effective to some degree. To the dismay of quarterbacks around the league, we can expect to see more Bowman blitz packages in the future, I am sure, even once Willis makes a full recovery.

"If a link gets taken out of the chain, someone has to step up," said Bowman. "Being a veteran guy, you have to think like that if you want to be the best. I was just playing my game, doing what the coaches called upstairs, and just executing. All the guys on the field did.

"If we lost anyone, somebody had to pick up their game, and that's what we did."

It's been a rough start to the season for San Francisco as they've had to deal with more than most. While the victory is sure to smooth over some wounds from recent weeks, there are still plenty of questions without answers. Will a definitive second option emerge behind Anquan Boldin? Who will step up in Aldon Smith's absence? Has Colin Kaepernick and the offense finally found a groove?

It still might be too early to know where this team is headed, but Thursday night's performance was certainly a big step in the right direction.