As we head into Week 5 of the 2013 NFL season, we've got another look at NFL power rankings. The 49ers climb back up a bit with their win over the Rams. New to Niners Nation? Sign up here and join the discussion!

Share All sharing options for: NFL power rankings, Week 5: 49ers creeping back up

The San Francisco 49ers put together a big road win in Week 4, heading to St. Louis to roll the Rams 35-11. The win snapped the 49ers two-game losing streak, and kept them two games back of the Seahawks.

The win has them inching their way back up power rankings. It is not at all surprising that the Broncos and Seahawks. The Saints and Patriots are a notch below those two, but right now, the Broncos and Seahawks appear to be the class of the NFL. The top two teams rarely end up in the Super Bowl, but for now, they are the best. The Broncos offense is looking like it will set some significant records. The Seahawks are not quite as strong on the road as they are at home, but that comeback win over the Texans was really impressive.

The 49ers now face another 2-2 team in the Houston Texans. We can officially say the Texans are "scuffling" as they have lost two straight, one via thumping, and one in a brutal collapse. Of course, in the NFL, one good week can turn things around. The 49ers will look to make a bit of a statement and build off the momentum of the win over the Rams. The Texans will look to stop their own bleeding and get back on track in the AFC South.

Once again, the folks at BeatGraphs.com get the prize for most interesting angle on power rankings. They create "BeatPaths" and you can try and figure it out HERE. It seems like if A beats B, A will be ahead of B. And if A beats B and B beats C, A will be ahead of both. It's not quite as simple as that, but it's an interesting way to look at something that is mostly for entertainment value anyway. They have the 49ers in 10th place. 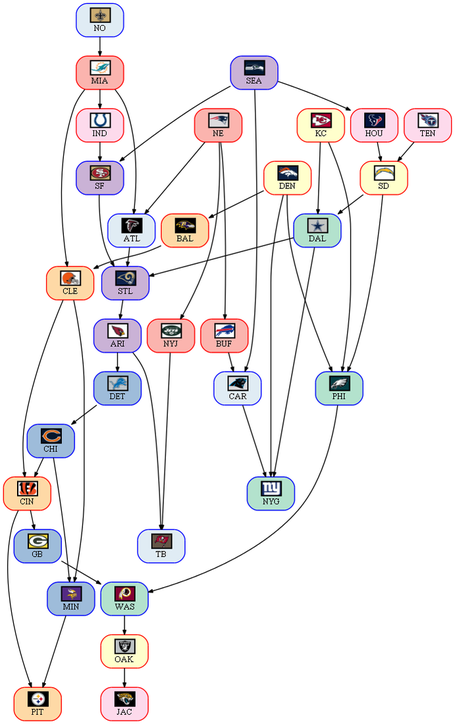