Saturday, October 12, 2013 edition of the Golden Nuggets, a daily compilation of 49ers links from around the web.

When William Shakespeare wrote Much Ado About Nothing, he couldn't possibly have conceived that it would have a lot to do about 21st century internet media, but here we are over-analyzing every 'jot and tittle' that we see online. The latest scrutiny is solely on the foot of Colin Kaepernick, which was listed on the team's injury report for the sole purpose of "complying with the rules". I guess on this slow media day, beat reporters' fingers are experiencing caffeine-induced, deadline-busting "Kappy Feet" on their keyboards. 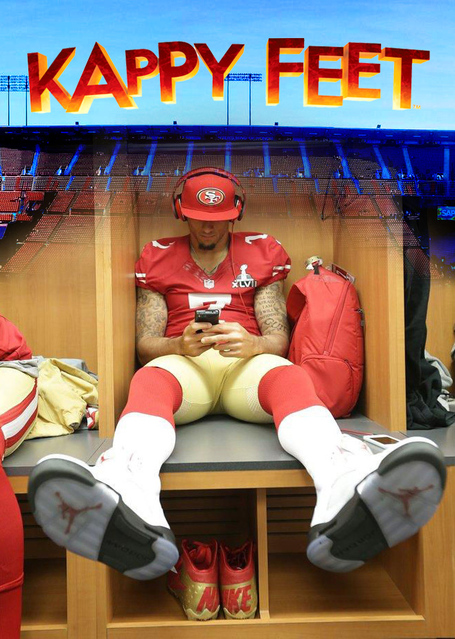 Moving on from feet, there are other key injuries to take note of especially those of LB Patrick Willis (groin), G Alex Boone (shoulder), T Anthony Davis (shoulder), C Jonathan Goodwin (illness), DT Ray McDonald (biceps), CB Carlos Rogers (knee), DT Justin Smith (shoulder), and CB Nnamdi Asomugha (knee) who are all listed as questionable. Majority of these guys will probably play with a few of them being game-time decisions.

Meanwhile, in spite of his devastating injury to begin this season, Michael Crabtree has worked hard and remained focused on the team. | "Coach Crabtree" didn't disappear after Achilles tear (BASG)

Here's a few previews and insights for tomorrow's game against the Arizona Cardinals. Looking forward to NFL game days is one of the reasons I am able to survive the work week. The way our running and defense has gone the past two weeks, this looks like another victory, but you never know in NFC West matchups. If the 49ers have a solid showing against the Cards', they could conceivably run the gauntlet for the next 3 games or so.

49ers May Be Poised for Winning Streak (NBC)

Matt's matchups are supposed to be a series of 3 head-to-head battles that could affect the game, but every week I have a hard time finding the third one.

I wouldn't count on him being out, but Larry Fitzgerald being hobbled will definitely play a part in this game. We know the Cardinals defense is good, but can their offense score enough points? | Larry Fitzgerald dealing with hamstring trouble again (PFT)

With the breakout game by Tramaine Brock, the effective pairing of safeties Eric Reid and Donte soon-to-be Hitner, and the quiet steady play of Tarell Brown and Carlos Rogers, the 49ers secondary is getting some attention. The Niners pass defense is currently ranked 2nd in the league.

These next two links would be a bigger issue if the Niners current crop of active defensive backs weren't playing as well as they are.

If the NFL is all about "player safety", this guy is concerned with fan safety. | Most Interesting Contractor at Levi's® Stadium (49ers)

It's Steve Young's turn to be all gooey about Candlestick Park. | Farewell Candlestick: Young Gets Away Again (49ers)

If you're new here, you can register for a free account to participate in the discussion and create your own fanposts here at Niners Nation and across our entire network of 300+ sports blogs.