The Booth Review - 49ers vs. Cardinals

"We can't go back. We got to keep on pressing forward."

Welcome back to The Booth Review. In the fourth quarter, when it mattered the most, the San Francisco 49ers clipped the wings of the Arizona Cardinals to put them away for good and recorded their third-consecutive victory in the process. What did we learn?

It's hard to complain when you're winning. Such is the case for the San Francisco 49ers who have strung together an encouraging winning streak as of late.

With their latest victory against the Arizona Cardinals on Sunday, the Faithful have another week to celebrate. We saw many reasons to remain optimistic moving forward but also some cause for concern. Through six weeks of play, it seems like San Francisco is still in a period of transition, struggling to establish their identity. When they seem to rectify one area, they regress in another. It's a case of one or two steps forward, one step back.

To be clear, the positives far outweigh the negatives at this point. But that doesn't mean we should avoid the negatives altogether. Let's discuss both. 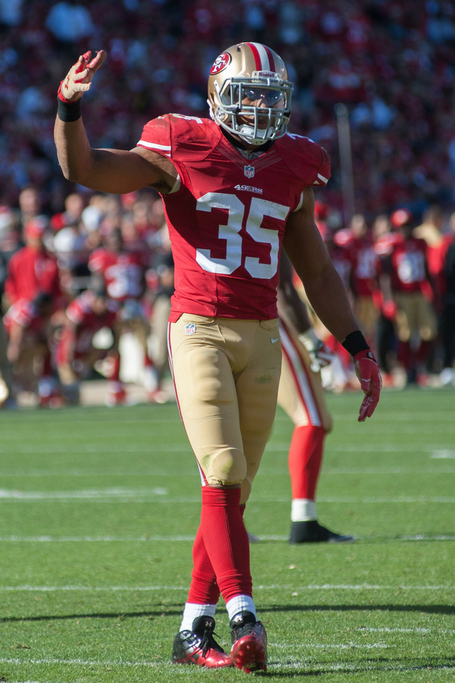 Sometimes, the best offense is a good defense - even better when that defense is creating turnovers.

For the second straight week, San Francisco set the tone on defense right out of the gate. Last week, Tramaine Brock recorded a pick-six just three plays into Houston's opening drive. On Sunday, it was sensational rookie safety Eric Reid who stole an interception before returning 53 yards to set up the Niners' offense at the 7-yard line.

The result? A field goal.

Later in the quarter, it was Carlos Rogers' turn. Backed up in his own end zone, Carson Palmer was desperate to make a play on third-and-ten. He forced a pass to Larry Fitzgerald who never had a chance. Rogers swooped right in for the easy interception and brought it back to the 11-yard line.

The result? A field goal.

Three plays and a minute later, Fitzgerald spun away from a whiff by Donte Whitner and had a clear path to the end zone - a 75-yard touchdown reception that put the Cardinals ahead 7-6 in the blink of an eye.

Halfway through the second quarter, San Francisco's offense finally turned on. Evading the pass rush and starting upfield, Colin Kaepernick uncorked a beautiful pass to Vernon Davis for the 61-yard touchdown. The Niners looked to finally be pulling away.

Three plays and a minute later, Andre Ellington walks into the end zone virtually untouched to bring Arizona within a single point.

On San Francisco's first five possessions of the game, Kap and company got the ball into the red zone on three occasions - to Arizona's 17, 8, and 2. The results of those three possessions: field goal, field goal, interception.

On one hand, it's encouraging to see the defense finally manufacturing turnovers (San Francisco's turnover margin through the first three weeks is -4; the last three weeks is +6). On the other hand, those turnovers are moot if the offense fizzles out every time they get a free pass. 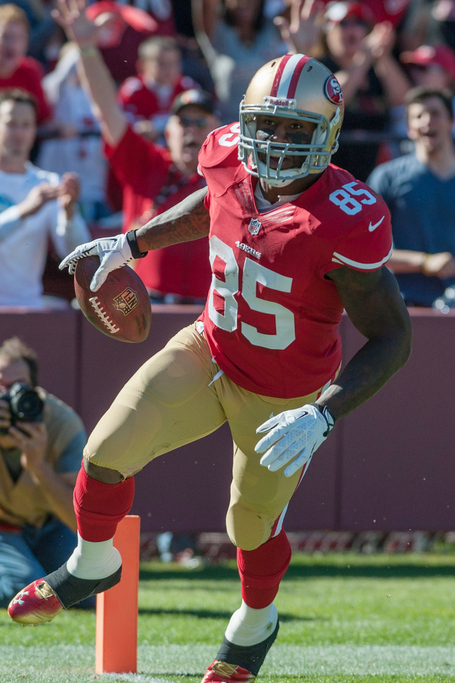 Though there were several standout performances on both sides of the ball, the day clearly belonged to Vernon Davis who posted career-best totals - eight receptions for 180 yards and a pair of touchdowns.

On what was quite possibly one of the most bizarre plays I've seen this season, backup center Daniel Kilgore was split wide left in the formation - a spot typically occupied by a receiver and much less frequently, a running back.

"What in the world is going on?" asks commentator Kevin Burkhardt.

The ball is snapped and Kilgore takes a few steps forward before turning back towards Kaepernick, mimicking a designed receiver screen pass. The ruse is just enough to occupy linebacker Daryl Washington and once he sniffs it out, it's far too late. Davis blazes right by Washington and makes a picture-perfect, over-the-shoulder reception for 28 yards.

While the drive did not result in any points, I'll be damned if I didn't rewind and re-watch this play about a dozen times. An absolute gem.

"When [Vernon] plays like this, he doesn't have to say anything," said Kaepernick. "Everybody on the team feels it, I know it, the coaches know it. We've got to put the ball in his hands."

"When you're in the zone, it's like you're on a high and you can't come down." - Vernon Davis

Right after the two-minute warning of the first half, Davis was on the right side of the formation working against safety Yeremiah Bell. There were no tricks involved, no smoke and mirrors, and definitely no offensive linemen split wide. It's simple one-on-one man coverage. Davis simply outruns Bell, and Kap drops a perfect dime. Bell attempts a last-ditch spinning dive but falls to the ground, and Davis shoots the jumper in the end zone.

"[The Cardinals] have a very good defense, and they committed an extra player to the box and went with man-coverage and at times zero-coverage and that gave Vernon a chance to win and make the big play," Head coach Jim Harbaugh revealed after the game. "And those were great plays that he made too.

"I'm thinking the corner-route, especially on the boundary when he went up, climbed the ladder, went up and got that. I didn't think he was going to be able to make that play...great concentration making that play. Those are big-time plays."

Big-time players make big-time plays. Davis recorded 171 receiving yards in the first half alone - the most by any player, in a half, this season.

"When you're in the zone, it's like you're on a high and you can't come down," said Davis. "It's about being on the same page and just having that chemistry with your quarterback.

"It was beautiful, but we can't stop here. We have to keep on going, keep on ascending." 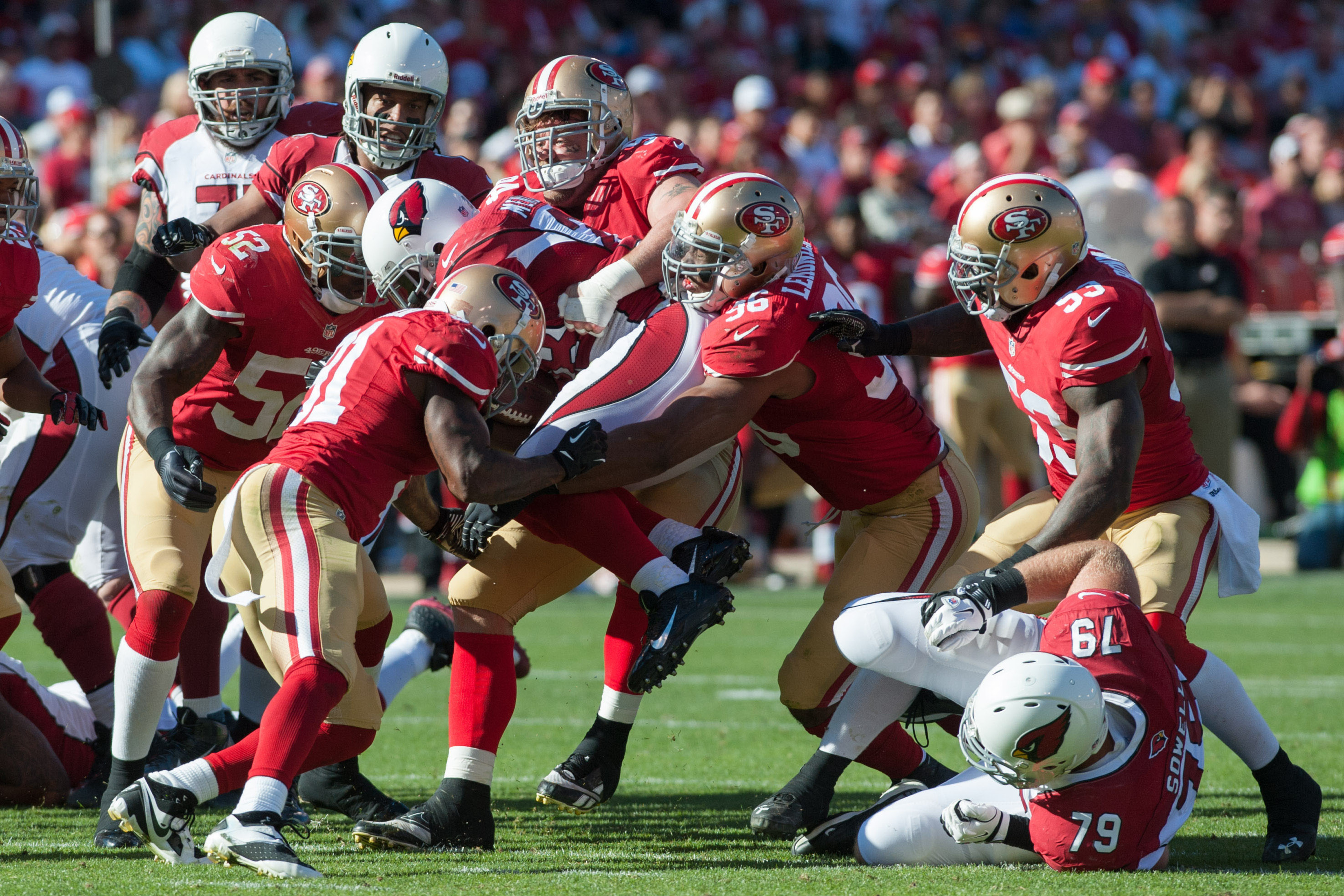 HELP IS ON THE WAY

Through six weeks of play, San Francisco's defensive line has been banged up more than any other position group. Nose tackle Ian WIlliams showed immense promise in limited playing time, but he is lost for the season with a broken ankle. His replacement, former first-round selection Glenn Dorsey, played well in his absence but exited Sunday's game early after injuring his hamstring. His status is still unclear. Defensive end Ray McDonald has been nicked up the last couple of weeks and his snap count reflects that.

But fear not - the cavalry is coming. Help is on the way for the defensive line and elsewhere.

"We've got some guys that will be in the mix this week," said Harbaugh, in reference to rookies Quinton Dial and Tank Carradine. Regarding the latter, "I think he's ready. I think both those guys are ready and can start practicing this week."

Safety Eric Reid has been nothing short of remarkable, a surefire candidate for 'Defensive Rookie of the Year'. Linebacker Corey Lemonier and tight end Vance McDonald are turning the corner and quickly becoming more integral contributors. If these guys are any indication, fellow rookies Dial and Carradine will fit in just fine. And for a defensive line that has been decimated in recent weeks, they will need all the help they can get.

The mantra so far this season has been "next man up". When one man goes down, another is expected to step in without missing the beat. The transition isn't always so seamless, but the Niners are doing the best they can. They're learning on the go and rolling with the punches.

It won't be smooth sailing for some time, but with the help of an exceptional class of rookies and the impending return of Mario Manningham and Michael Crabtree, things will get better.