All-22 of Corey Lemonier's big game vs. the Cardinals

Breaking down a few plays from 49ers rookie outside linebacker Corey Lemonier in what was a pretty good game against the Arizona Cardinals.

Share All sharing options for: All-22 of Corey Lemonier's big game vs. the Cardinals

With the 49ers lacking all-star pass-rusher Aldon Smith, it is paramount that someone step-up and at least try to fill the big shoes left by his absence. Fortunately for them, rookie outside linebacker Corey Lemonier has been up to the challenge.

Lemonier has 11 pressures in just 78 pass-rush snaps this year, per Pro Football Focus, and he had himself quite a game against the visiting Arizona Cardinals in week six. He might not have made a ton of plays, but the ones he did make were quite huge, including a sack for a safety, a batted-down pass, and a forced fumble.

I took a look at the coaches film (and broadcast angles) of these three plays and thought I'd share them here.

Below is the end-zone angle of Lemonier's sack-safety. You'll note that he uses his hands to create separation, and also to remove the left-tackle's hand from his own body (circled). He got "home" to the QB in just over two seconds on this play, far too quickly for Carson Palmer to do anything but crumple in Lemonier's grasp.

The next play was the batted-down pass. Lemonier had it sniffed-out the whole time, pulling back from his pass rush and getting himself prepared for a timely jump. It turns out he didn't need to get much height on the leap, as Palmer's pass hit him either in the biceps or the helmet. It's hard to tell which, but you can see the ball is behind his arm in the shot below. I added some other illustrations of what I think happened on the play, too. 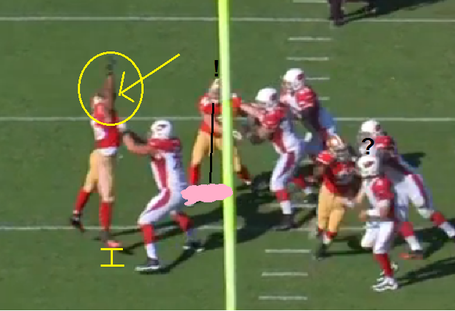 Finally we have the forced fumble. Lemonier ripped this one out, as you can tell from the broadcast replay, based on the angle that he hit the runner and how the ball (circled) came out going the other direction. Just another heads-up play by a rookie who's been called into action. 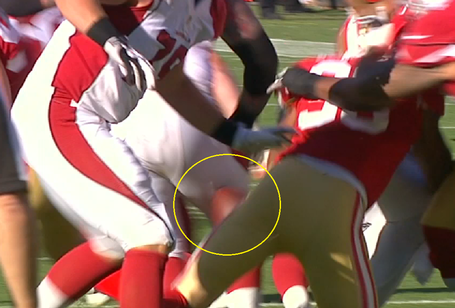 Let's hope the young player can build on this momentum he's seemingly created for himself and continue to wreak havoc on opposing QBs. Living-up to Aldon Smith's production is a tall task, but if Lemonier can even come close, the future seems bright for him, as well as the 49ers defense in general.