The Booth Review - 49ers vs. Titans

“We're taking small steps, but we’re taking them in the right direction.”

Welcome back to The Booth Review. On Sunday, the San Francisco 49ers took out the Tennessee Titans to extend their winning streak to four. We saw strong performances in all three phases of the game. What did we learn?

And the beat goes on.

Just a few weeks ago, the San Francisco 49ers seemed stuck in a state of turmoil having dropped back-to-back games in the worst way. With problems mounting fast, the frustration was palpable.

Today, we see a team renewed after winning their fourth-consecutive game to reach a record of 5-2. These days, the mood is markedly, and understandably, more jovial.

Sunday offered what was perhaps San Francisco's most balanced performance so far this season. Every phase of the game - for three and a half quarters, at least - was good, great, or exceptional. 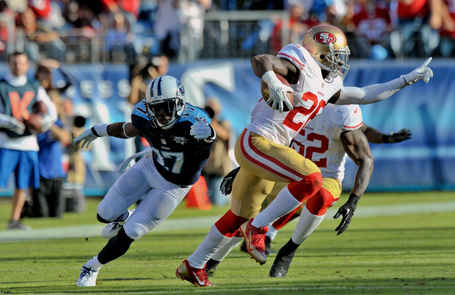 In sports, there are few things more heartening than a tale of rags to riches. And while it may be too early to definitively label it as such, we may be witnessing one in Tramaine Brock.

Brock made his mark during his junior year of college where he attended the University of Minnesota. Unfortunately, after failing to qualify academically, he was forced to transfer to the lesser-known Belhaven University, a private liberal arts school in Jackson, Mississippi.

Having just established their football program in 1998, Belhaven wasn't exactly the ideal landing spot for an NFL hopeful, and Brock's draft stock suffered as a result.

"I just play my technique and use my speed and my quickness." - Tramaine Brock

He signed with San Francisco after going undrafted in the 2010 NFL Draft and has been a sparse contributor in his first few years. However, after Nnamdi Asomugha went down with a knee injury in Week Three, Brock rose to the occasion and proved to be an invaluable mainstay for a secondary that struggled early in the season.

If you want to be picky, he's still technically not even a starter as most of his playing time has been as the team's third cornerback, but Brock is certainly making an impact. Through the last three games, he has recorded three interceptions - tied with ten others (Eric Reid among them) for the league's second-highest total.

"I just play my technique and use my speed and my quickness," says Brock. "I read the quarterback and his three-step drop or five-step drop, and I just go back to the receiver."

In his limited amount of playing time, Brock has shown us plenty to suggest he is here to stay. What was seen as a defensive liability at the start of the season, the secondary is slowly morphing into a team strength (imagine what could have been had seventh-round rookie Marcus Cooper not been snatched up by the Kansas City Chiefs). 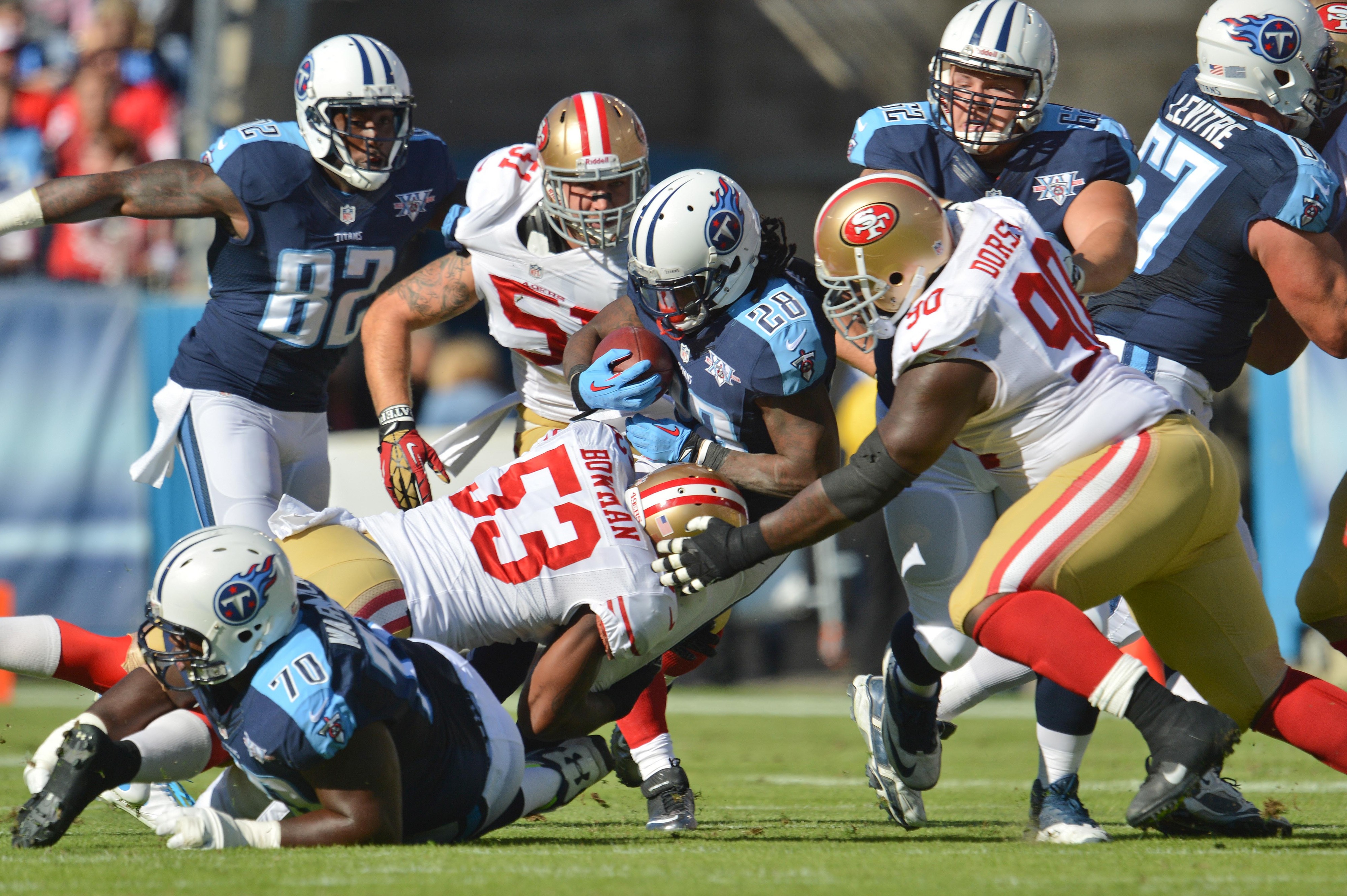 (Don McPeak/USA TODAY Sports)
"Two of the best in the game. There's a standard that Patrick [Willis] has set and so has NaVorro [Bowman], and I thought they were playing at their high level today." - Jim Harbaugh

In truth, the defense overall had a phenomenal day, holding Tennessee scoreless until the fourth quarter. And by then, San Francisco already had a 24-point lead.

Chris Johnson, who has been the Titans' home run-hitter over the last few years, was held to just 39 yards all day on nine carries. His longest run was for 9 yards.

Look no further than the Doublemint Twins in the middle, Patrick Willis and NaVorro Bowman, who were everywhere on Sunday. On Tennessee's opening drive which consisted of six plays, either Willis or Bowman made significant defenses on four of them.

"Two of the best in the game," said Jim Harbaugh. "[Patrick]'s a great leader for our football team. Respected by everybody in the organization and that speaks volumes. There's a standard that Patrick has set and so has NaVorro, and I thought they were playing at their high level today." 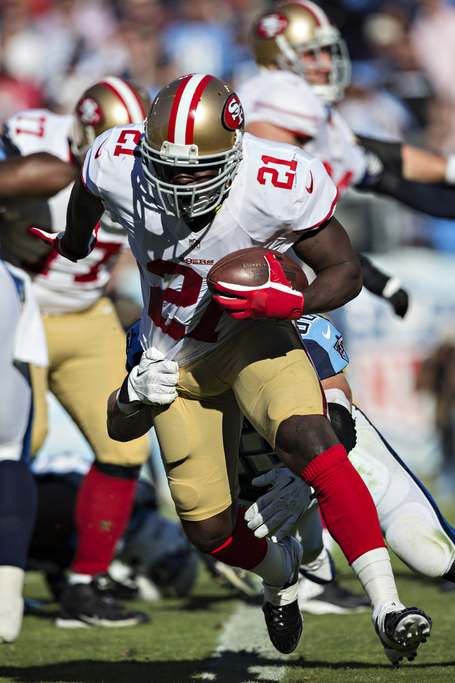 Against Tennessee, the Niners appeared to strike a perfect balance.

We all know it starts with Frank Gore and the ground game. The equation is simple: when Gore runs well, the Niners win games. And as if he wasn't already a handful, the Titans also had Colin Kaepernick to think about.

Tennessee simply could not find an answer for Gore and Kap.

Gore was gashing the Titans' defense for the 'hard yards' up the middle all day. And when he wasn't running the rock himself, he was throwing blocks for his quarterback. You scratch my back, I scratch yours, right?

On third-and-seven at Tennessee's 20-yard line, Kaepernick kept the ball on the read-option. Fullback Bruce Miller tied up middle linebacker Colin McCarthy while Gore ran about ten yards up-field and threw a chop block on safety Michael Griffin. Kap ran into the end zone, untouched, for the score.

"Frank was huge, coming back, getting that block," said Kaepernick. "Everybody had huge blocks on that. They made my job easy."

Speaking of the read-option, it's a wrinkle that hasn't been mentioned in awhile, and its appearance against the Titans reveals quite a bit. Specifically, we have a better sense of how the offensive coaches might perceive and implement it moving forward.

When asked about it after the game, Jim Harbaugh offered yet another classic 'Harbaugh-ism': "Sometimes you bring it out, and then you put it away, and then you bring it back out. It's a great tool to have. It's a club in our bag."

Kaepernick gave a somewhat more sensible response: "It's just another part of our offense. It's going to depend on what the defense is doing. [The Titans] were giving us that opportunity with the looks they were giving us."

Against Tennessee, we saw what a balanced Niners offense can be. But as Vernon Davis points out, there's only one way potential can become reality.

"I think the next step is being consistent. We have to develop consistency," said Davis. "I don't care what it is; if you're consistent, then you will have success." 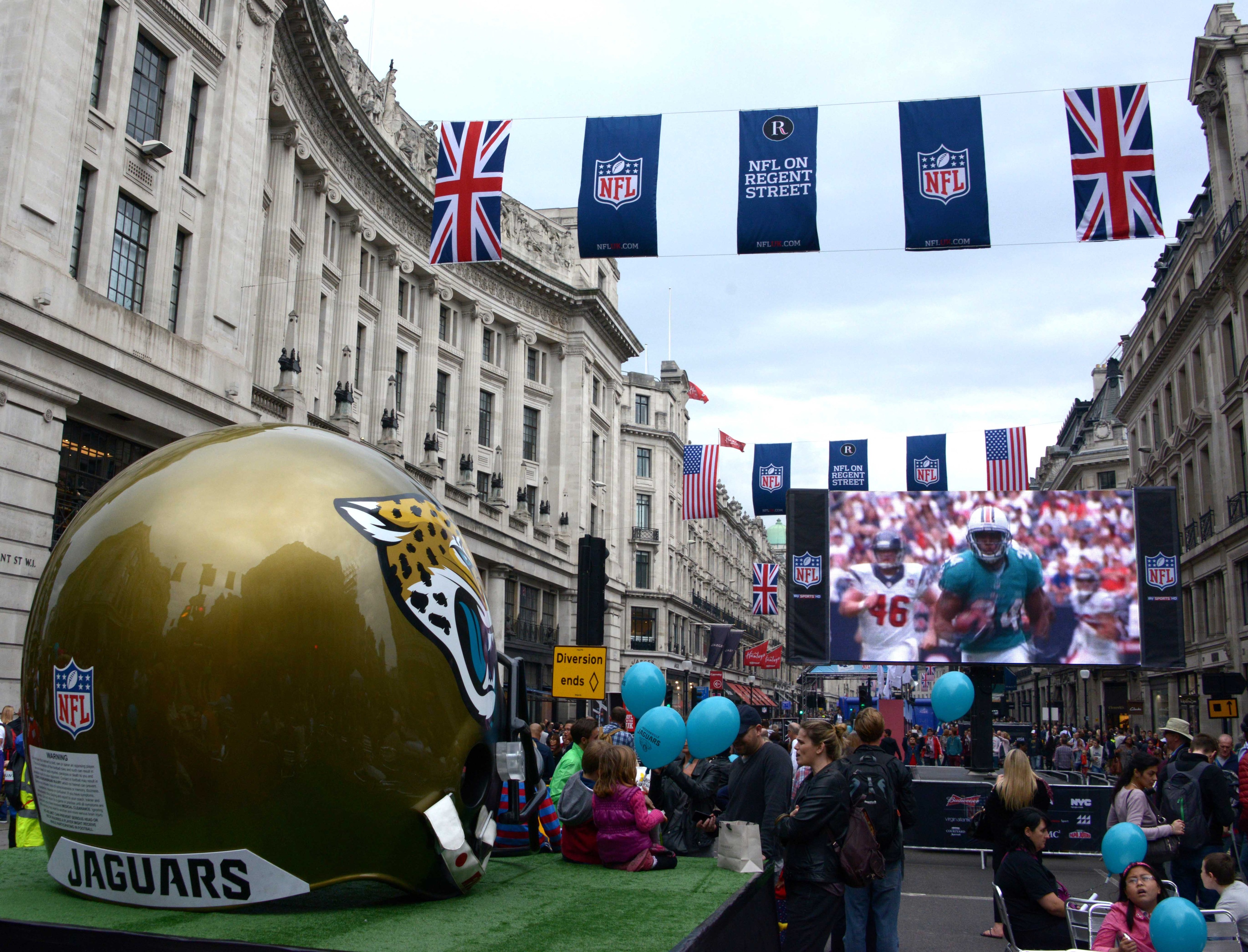 The Niners are London-bound.

After leaving LP Field with a victory on Sunday, the team boarded a plane that would take them across the Atlantic to London, England for their second international game in four years.

In 2010, San Francisco, led by then-head coach Mike Singletary and quarterback Troy Smith, nabbed a 24-16 win over the Denver Broncos at historic Wembley Stadium. My oh my, how times have changed.

This time around, the Niners face a Jacksonville Jaguars squad that has yet to win a game this season. A winless team on a different continent in an unfamiliar stadium...it has all the makings of a trap game. San Francisco cannot afford to play complacent against a team with nothing to lose. But Gore assures us that his squad remains humble as they head across the pond.