We take a look at why San Francisco 49ers running back LaMichael James -- hypothetically -- would make sense for the Cleveland Browns in a potential trade for wide receiver Josh Gordon.

Share All sharing options for: Why LaMichael James would make sense for Browns in potential Josh Gordon trade

There are no significant, credible rumors that link San Francisco 49ers running back LaMichael James to any potential trade, including anything having to do with Josh Gordon and the Cleveland Browns. I wanted to get that out of the way right now before launching into a piece based entirely on opinion which is devoid of actual rumor or even proper speculation.

More: For more on Gordon and the Browns, visit Dawgs By Nature

What we do know is that teams have inquired about trading for Gordon, a young receiver with an awful lot of talent. We do know is that the 49ers, at one point, were one of the teams to inquire about Gordon. We also know -- or at least I know -- that Gordon makes sense for plenty of reasons, as I outlined in a previous post.

The negatives: he has off-the-field issues, and it would make Trent Baalke sad because he measures the wealth of his life by the amount of draft picks he manages to acquire. 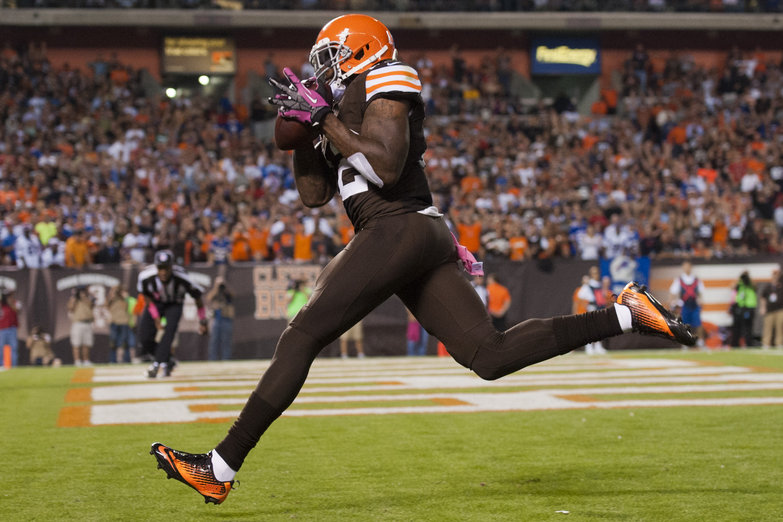 We talk about why trading for Gordon makes sense for the 49ers, if the Browns are willing to deal.

Now, we've established my feelings on a potential trade and I can get back to the point of this post: to talk about James. Not me -- the second-year running back who has made headlines for his bench-warming skills far more than his play-making skills this season. The most recent prominent rumors suggest that the Browns are looking at a high draft pick and a player in exchange for Gordon.

Yesterday, some folks floated the idea that James could be that player. It's a convenient situation, given that he's not seeing the field in San Francisco for whatever reason and again, there's no real rumor here, but in my opinion: it makes a whole lot of sense.

Not just for the 49ers, who have to feel good about Kendall Hunter and who like the potential for Marcus Lattimore heading into next season, but for the Browns. Discerning readers will note that the Browns are a mess right now, and specifically need a quarterback more than anything. They'll also note that the Browns recently traded away running back Trent Richardson, a first-round pick in the 2012 NFL Draft.

They saw the writing on the wall with Richardson

So why would they want James? It's simple, really: James is a much better fit for head coach Rob Chudzinski's scheme. There are those who said the Browns were wiping away their season when they traded Richardson, but I disagree with that. The Browns knew they were better than people thought, but they also knew that Richardson was a starting-ready back who did not fit in Cleveland. They saw the writing on the wall with Richardson's future in Cleveland, and they traded him.

There's a new ownership and that ownership has a new general manager, who in turn has his head coach. I think Chudzinski can do some good things in Cleveland, but he needs the right guys. Obviously, he needs a quarterback, but he took a big step in getting that quarterback by trading Richardson.

Keep in mind, nobody in the league knew what Richardson had to offer better than Chudzinski. He knew what he was trading, and he knew it was the right move for the offense going forward.

James is a much better fit. They want to run outside, they want to get their offensive linemen moving, they want to push things sideline to sideline and they need a fast, explosive player at the running back position. James is a bit more raw, but he'll have time to grow with the Cleveland offense while they search for a quarterback.

It's not James for Gordon -- it's James and a high pick.

Now you might say this: why would a team that is trying to find pieces for its offense get rid of a player like Gordon? For me it's simple: he's the player other teams want, and the team needs a quarterback. Remember, this is not a trade of James for Gordon. It's James and a high pick -- presumably a second- or third-round pick, and all of this is in service of improving the overall quality of the team.

If the Browns think that a player and a pick can serve them in acquiring a quarterback with more upside than Brandon Weeden (hah), then they'll certainly deal. That defense is good -- real good -- and they need the offense to catch up. Finding a franchise quarterback, potentially a starting running back (who is a much better fit than the last) and anther piece or two in exchange for Gordon and Richardson sounds like good business to me.

The trade deadline is a week away. This should be interesting.