Yesterday saw the 49ers join Tottenham Hotspur to kick off the week of the eighth International Series game with a joint Play60 event. We spoke to some of the San Francisco players about their excitement for their week in London - while team co-owner John York hinted at the future of the NFL in London.

Share All sharing options for: International Series Game 8: Notes from the 49ers' Play60 Event in London

While part of the SBNation family as a writer for Bucs Nation, I also co-run a British NFL blog called The Pulling Linemen. TPL will be at all media events this week for the Jaguars-49ers International Series game, and are delighted to work together with NinersNation and Big Cat Country to bring you reports from the teams' media events, practices and press conferences all week long. All photos courtesy of SBMedia.

The Rams were the first team to bring their entire squad to their London Play60 event, with the Vikings following suit. Monday saw arguably the largest Play60 effort in London yet, as the whole San Francisco roster made their way directly from Gatwick Airport to the training facilities of Barclays Premier League side Tottenham Hotspur.

49ers players worked side by side with Spurs players, including team captain Michael Dawson and American goalkeeper Brad Friedel, in coaching local kids through a variety of both football and soccer drills. They were assisted by coaches and players from the British football team the Maidstone Pumas (pictured above with Kaepernick), who were invited be involved with both this week's Play60 events in recognition of the work the team have done in promoting flag football in local British schools - an initiative on which The Pulling Linemen will be bringing you an exclusive report in the coming days.

The expanded effort of the NFL teams over the past few seasons in bringing their full team speaks to an increased effort to having star players being more visible in the International Series project - and it seems even more this time round, as when the 49ers 'hosted' the Broncos at Wembley in 2010, they had only a few players involved in that year's Play60 event. Speaking to the assembled media at the event's conclusion, team co-owner John York explained that "last time, we did the event on the Tuesday which is also the players' day off, so it was hard to coerce everyone to coming to do the community event".

While addressing the coercion aspect was a refreshing admission on York's part - the NFL prefers to paint the picture that their players positively embrace any and every opportunity to be involved with the community - the men whose salary he pays were more on-message. "It's really important to give back and inspire", stated British-Olympian-turned-defensive-end Lawrence Okoyoe, "it would have been great when I was a youngster to have amazing international athletes come in and just talk to us... that's a great connection and hopefully it'll inspire some kids today." Fullback Bruce Miller, who was presented by the 49ers PR staff as being 'one of our biggest community involvement guys' echoed similar sentiments: "these guys out here, people look up to them... it's important to be a good role model and show these kids that hard work can pay off."

Quarterback Colin Kaepernick talked about another aspect of today's event - not only encouraging kids to be active, but also introducing many of them to American football for the first time. "For a lot of them, it's the first time picking up a football," said Kaepernick, "that's something they'll carry with them... to give them their first experience and try to teach them from the ground up, it's awesome." 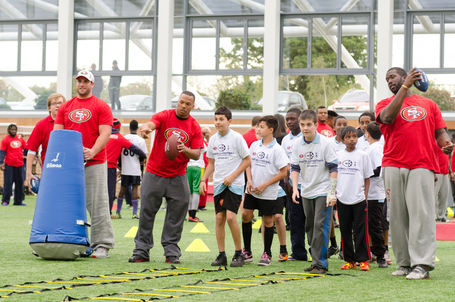 There is no doubt there are some in NFL circles who hope that these kids will indeed carry yesterday's event with them - especially when they get to the age where they're buying tickets to sporting events. It's no secret that the NFL are trying to continually grow their presence in London, and as might be expected, it was the most asked-about subject put to York, especially as Roger Goodell has gone from being supportive of a potential franchise in London back in June to striking a more sceptical note at the league's most recent owners' meeting.

For York, the future of the NFL in Europe could go either way: "The next step is to play more games, [but] where that step is, as to how many games or a franchise, is too far away for me to handle. Obviously it's a thought process... but I don't know the direction it will go". For York, it comes down to one key figure: backsides in seats. "It's all going to be dependent on fan approval," stated York, "obviously that fan approval has increased so we're playing two games now... I think there's a number of different options, but those options aren't two or three years down the road, they'll be a little more than that - but I suspect we'll look at more ways to play more games [in Europe]."

The biggest obstacle to a potential London franchise is arguably the ability of such a team to attract players, with some NFL players saying they'd rather retire than play in London. In contrast, Kaepernick offered a more positive (albeit somewhat lukewarm) endorsement of the idea, stating that while "you'd have to ask each individual player [as] the responses would be different... I've heard great things [about London] so I don't think too many people would be opposed."

While not offering an opinion on a franchise in the city, the London-born Okoye is clearly a supporter of the International Series: "American football's a great sport so it's great that we're over here so our country can see what the game has to offer, and hopefully in the near future we'll get even more games over here... the best way to get people involved is these games, hopefully that'll get people excited and that'll grow it from the ground up." 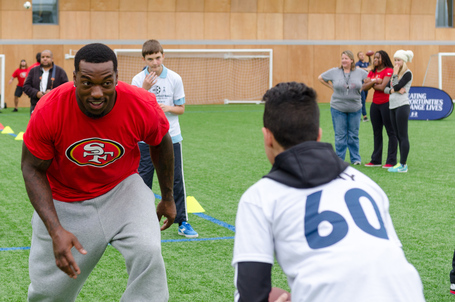 The grass roots approach to growing the popularity of American football is something that John York admits is not a primary focus for the 49ers, instead taking the opportunity to praise NFL International's Chris Parsons, but he did state that "we do look at doing some of those things... one of the largest leagues in terms of youth clubs is down in Mexico, there's over 2000 of them" - a number that puts the UK's 200-odd American football teams into perspective. "Obviously soccer is all over the world, it'll be difficult to compete in that manner [and] no-one's trying to.... but it's popular in other parts of the world and people like to play it."

Despite being having an Olympian on their roster in Okoye, however, York stated that "I think would be difficult [to have American football as an Olympic sport], there's not enough teams playing it", a statement that perhaps clashes with the fact that the International Federation of American Football, a partner of both the NFL and USA Football, is resubmitting a bid to the International Olympic Committee this very month to be an officially recognised sport.

Though the IOC rejected IFAF's first bid for recognition back in May, it nonetheless represented the first time the IOC even addressed American football as a sport, showing some incremental signs of progress in the globalization of the sport. That effort of globalization has undeniably had backlash among a significant number of NFL fans back in America, evoking some passionate, even vitriolic responses. Kaepernick, however, stated that "I think it's something [those fans] need to reconsider. Football's a great game, it should be an international sport and especially if there's a great following like there is out here, why not bring games out here and spread the game?"

Returning to the Olympian, even though he's on injured reserve, Sunday will be a special thrill for Okoye as he stands on the sidelines of Wembley's hallowed turf. "Every child who grows up in this country dreams of playing sport at Wembley, I've got a chance to be there and hopefully in the future get a chance to step on the field myself," the discus thrower explained, "I'm excited for the team more than anything... they're really excited about playing at Wembley and hopefully the crowds will be excited too."

Miller certainly appears to be one such player, claiming "I'm a big soccer fan so I've heard lots about Wembley, I'm excited to go out there and play in front of the fans", while even someone not so much into association football, such as Kaepernick - "I know a little bit about soccer but I haven't always been the best with my feet so I didn't play too well!" - seems cognizant of the stadium's history: "I've heard a lot of great things about it, a lot of great teams have been there so to be on the same field is an honour."

As he claims not to have been the best with his feet - something his noted rushing ability obviously belies - he had nothing but praise for the Tottenham players, saying it was "very interesting, especially seeing how they move - it's a lot different to us. A lot of us use a lot of power moves and strength, [but] they're smooth with everything they're doing, their footwork is amazing."

Soon the hour was up, and the children were herded in to gather around John York and Tottenham Hotspur chairman Daniel Levy to hear the two promote the Play60 message - and of course, exchange team jerseys. York said the players have a day off on Tuesday to sightsee around London before their usual weekly practice schedule picks up on Wednesday. The Pulling Linemen will be at all 49ers events this week, so make sure to keep it here for all your International Series updates. We leave you on a final quote from York, who also serves on the NFL's International Committee and was even the committee's chairman at one point - a quote which might add fuel to the fire of speculation when it comes to the future of their Sunday opponents:

"Jacksonville and the NFL have committed together for Jacksonville to play for [four] years so it allows people in the UK to develop an affinity for one club. As you know, you come to the game and regardless of the two clubs you've got 32 different jerseys out there, which is all fine - but what happens if you've got some affinity because Jacksonville's here every year? We'll see." 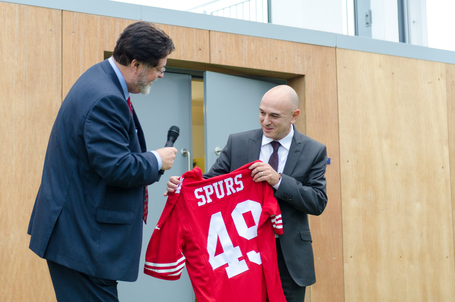