Seven through seven: What we know about the 2013 San Francisco 49ers

In Part One of this two-part series, we analyze what we've learned about the Niners through the first seven games.

Share All sharing options for: Seven through seven: What we know about the 2013 San Francisco 49ers

In looking at the story of the 2013 San Francisco 49ers, there is a lot that has transpired, and a lot that has yet to take place. The 49ers have successfully authored the first part of their season, but there are some questions that remain to be answered.

Today, we break down seven observations of "what we know" about the 2013 49ers through the first seven weeks of the season.

An oft overlooked component, some might forget just how big of an impact the 49ers' impeccable special teams made during their 2011 breakout season. The role of special teams cannot be overstated. 2012 was clearly a down year for this squad-the coverage was bad and an injured David Akers crumbled as the season wore on. During the offseason, the 49ers made it a point to address the unit, signing players like Raymond Ventrone, Kassim Osgood, and Dan Skuta. The results have paid off thus far. The coverage unit has been stupendous, led by C.J. Spillman: a man who seems to be drilling return men at will as soon as their hands touch the football. San Francisco has excelled at pinning opponents deep in their own territory, giving the defense a much better starting position than what we saw in 2012.

Punt returning and the kicking game have left a bit to be desired but the output hasn't been downright "bad"; it just could be better. With a fair catch wave on every punt return, Kyle Williams is also waving goodbye to his spot on this team's roster (more on that topic in no. 5 below). For more on the kicking game, see no. 7 of WHAT WE DON'T KNOW coming later today.

2. Eric Reid is as good as advertised; the secondary is better than advertised

With the money that Dashon Goldson was going to command, it was clear the 49ers couldn't retain him if they are going to extend other key players like Colin Kaepernick, Aldon Smith, and Mike Iupati. Knowing that would be a hole to fill, the Niners moved up in the first round to nab Eric Reid, the heir apparent at free safety. Not only has Reid played like a first round pick, he's even exceeded those expectations, delivering the punishing hits that Goldson was known for but without the boneheaded penalties. Even more importantly, he's displayed great range and coverage skills. 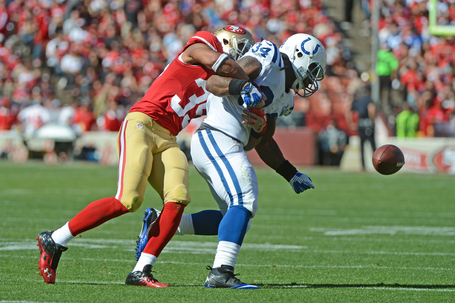 The secondary unit, as a whole, is playing much better football. The cards were stacked against this squad with Chris Culliver out for the year, Goldson shipping off to Tampa, and Nnamdi Asomugha being injured early. As it turns out, Asomugha getting hurt was one of the better things to happen to the secondary. It afforded Tramaine Brock an opportunity to prove himself, and prove himself he has. No longer a coverage liability, Brock has been a true force as the team's nickel corner-hauling in three interceptions over the past three weeks.

3. Anquan Boldin was one of the best acquisitions any team made in the offseason 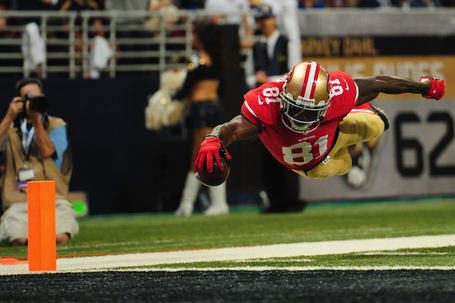 He's single-handedly (literally) carrying this abominable wide receiving corps. I knew the 49ers were getting a solid veteran coming off of a rabid postseason performance, but I didn't expect Boldin to be this good. He carries a lot of qualities 49er receivers have lacked over the past 10 years. He is great at locating a contested ball in the air and has a knack for fighting for the catch in traffic. His 495 receiving yards through Week 7 rank him 19th in the league, ahead of venerable players like Calvin Johnson (although Johnson has missed time with injury), Wes Welker, and Larry Fitzgerald. To receive that kind of production in exchange for a meager sixth round pick-incredible. Despite snagging the Super Bowl ring that eluded him in 2008 last year, it's clear Boldin is far from complacent. The veteran wideout is relishing the opportunity to get back to the big game and show Baltimore they made a mistake in letting him go. 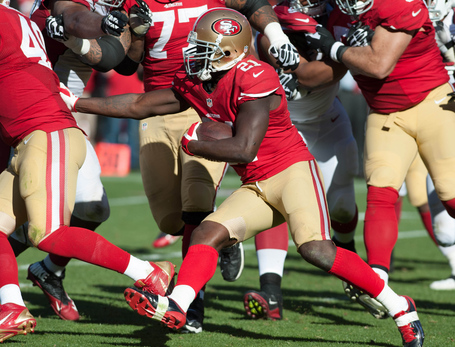 ...And he's responding to his critics every week. In what has become an annual occurrence over the past few years, Frank Gore has a quiet game or two and fans declare him washed up. This was again the case during the first two or three weeks of this season. Then came the Rams game. In the week leading up to the Week 4 contest, Gore called an all-players meeting to right the ship in San Francisco after two putrid losses to Seattle and Indianapolis. He then proceeded to rattle off a 153-yard, one-touchdown performance during a rout of the Rams. Since that game, it's clear that Frank Gore is still Frank Gore. His quick cuts, supreme vision, patience, and anticipation are as sharp as they've always been. And while Kaepernick may be the fresh young face of this franchise, it is Gore who truly makes this offensive machine run.

5. Kyle Williams should be cut

It's as simple as that. What is he buying the 49ers right now? In a decimated wide receiving group, Williams still cannot garner targets or make a name for himself. He's utterly absent from the passing game and offers little to nothing in the blocking department, thanks to his diminutive size. When he did finally haul in a catch against the Titans...he fumbled it and was only saved by the Titans not having a challenge left. To top it off, he provides virtually nothing in the return game. If it's not one of his 5,000 fair catches, it's a minimal gain on the return. The 49ers can find someone else to fair catch the ball and they can certainly do no worse in plugging another receiver in opposite Boldin. He'll likely stay on the team with Manningham and Crabtree due back over the next month, but he has not earned a roster spot and his lack of ball security is liability (see NFC Championship game, 2011).

6. Coaching staff and Kaepernick are getting back to their old ways

I saw a turning point for Kaepernick against a stout Titans defense in Week 7. I saw some read option, I saw more decisiveness, I saw less mistakes. The game against the Titans was quintessential 49ers football-stout defense, smart offense, dominant special teams. In recent weeks, the coaching staff has laid off its collective fascination with Kaepernick's arm and returned to the 49ers true offensive identity: a power running team with an aggressive offensive line that bends the defense at its mercy. 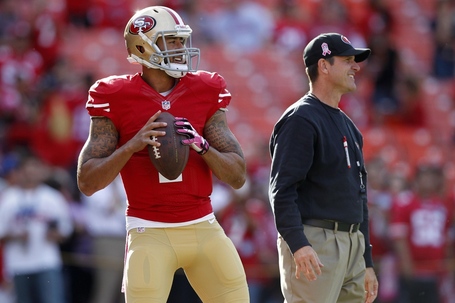 Beyond that, they are finding more ways to keep the chains moving. They're incorporating Bruce Miller and Frank Gore into the passing game a little bit. They're scheming ways for Vernon Davis to get open more often. Those are the kind of adjustments and game plans we've come to expect from Harbaugh and Roman, so when they strayed from that in the first few weeks, it left many perplexed. Clearly, the passing game is significantly hampered by a lack of receiving options and that was well understood. What wasn't understood is why they seemingly refused to find ways around that in the early going. It feels like the staff and the offense have found a groove, one that hopefully sustains until weapons like Manningham and Crabtree return.

7. Getting healthy will help, but it can't be an expected outcome

The NFL is experiencing devastating injuries at a record pace this year. Every week, a new crop of players are being carted off the field. The 49ers are no stranger to the injury bug this season, something they had previously evaded in 2011 and 2012. Their ability to rise above those injuries and perform at a high level has been commendable.  But as quick as everyone is to speak of how dominant the Niners can be at full strength, it's not entirely realistic to expect that. The 49ers will have to continue to develop reserve players quickly, ensuring they're ready to go when their number is called upon. Nothing is guaranteed in the NFL, especially this season. The more these backup players and rookies can prepare for a starting role, the better off this team will be.