LaMichael James is retweeting all sorts of people now. Could he just be trolling us at this point?

Share All sharing options for: I'm pretty sure LaMichael James is just messing with people now

There has been a lot of chatter about whether or not LaMichael James is happy in San Francisco. We've seen discussion about whether he's complained about his role, and really the list goes on of things that may or may not be happening.

Earlier today, James spoke briefly with the media, discussing his role with the team.

"It's just a numbers game," James said. "If you look at the situation we're in, Kendall (Hunter) doesn't get many carries, and we've got defensive linemen hurt so we've got to carry an extra one. I've just got to be a team player.

"The writing's on the wall. You know the situation. I'm a professional now and know I've got to take it."

There has been discussion among fans about whether the 49ers might try and package James with a pick in a deal for wide receiver Josh Gordon. Nobody has confirmed anything related to that, but it hasn't stopped the discussion. On Tuesday, James retweeted this:

Earlier this afternoon, he retweeted this: 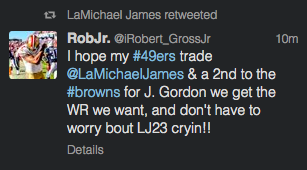 It's easy to read into that latter retweet. However, given the former retweet, combined with his retweet of someone calling him a brat, and his comments earlier today to the media, and I actually think he just sort of doesn't care about this stuff anymore. Or he cares enough to retweet it, but he's sort of just messing with people now. I don't think any of us can anything with absolute certainty, but that's just the notion I take from this whole thing. Dylan summed it up best:

The NFL trade deadline is this coming Tuesday. The 49ers will get through their weekend in London, probably get back to San Francisco sometime on Monday, and then handle whatever business they might have at the deadline. I would be surprised if a trade happened, but you never know what will happen over the few days.

For now, we're left to wait and wonder about a situation that is getting a little more bizarre by the moment. At least it keeps us on our toes!