We take a look at seven items we've yet to learn about the 2013 San Francisco 49ers.

Share All sharing options for: Seven Through Seven, Part II: What we don't know about the 2013 49ers

In our previous installment, we analyzed seven things we've learned about the 49ers through the team's first seven games. Now, we break down seven things we have yet to learn about the Niners. These are the items to keep an eye on as the season progresses pass the midway point.

Note: The Aldon Smith situation has been omitted from this list, mainly because the subject has been covered ad nauseam and is more of an off-the-field matter. There's not much to speculate on other than when he's coming back, which Jim Harbaugh insinuated could be in the next couple weeks.

1. Will the 49ers address the wide receiver position via trade?

The rumor mill has been churning with names like Josh Gordon and Hakeem Nicks. Will the 49ers pull the trigger on a deal or will they hold out for Mario Manningham and Michael Crabtree, under the presumption that they can pick back up at close to full speed and be effective? It's a very tough call and the coaching staff knows far more than we do in terms of the fallen receivers' injury progress. Gordon is a very talented wideout but with one more violation of the league's substance policy, he sits for an entire season. Are the 49ers willing to gamble on his behavior after what they've experienced with Aldon Smith? It's a risky proposition, but with Gordon's undeniable skill set, it may be one worth rolling the dice on.

Nicks, on the other hand, is an expensive one-year rental. He's pulling in over 2 million this season and is a free agent in 2014. On top of that, he's been having a less than stellar season and is an injury prone player. In the likely event that the team passes on Gordon and Nicks, we can assume that Harbaugh and co. are fully confident that Manningham and Crabtree can return close enough to form this year to make meaningful contributions.

2. When (and how) will Tank Carradine be inserted into the lineup? 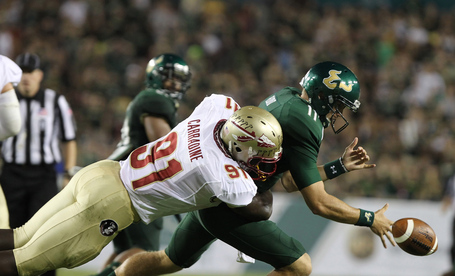 It's no secret that the 49ers defensive line is banged up right now. Ray McDonald is playing through a partially torn bicep tendon, Justin Smith has appeared on the injury report with an ailing shoulder, and Glenn Dorsey is hobbled by a hamstring issue. The coaching staff came out last week and noted that rookies Quinton Dial and Tank Carradine were practicing, and Dial received some playing time late in the 4th quarter of the Titans game. Carradine has stated that he's ready to play, but Vic Fangio is known for his reluctance to lean on rookies and intimated that it would take some time acclimating guys like Carradine and Dial to the pro game. With that ailing defensive line, Fangio would be wise to start getting Carradine on the field sooner rather than later.

The former Florida St. Seminole would have projected as a first rounder had it not been for an ACL injury. He's a viable pass-rushing threat off of the edge and although he's missed valuable practice time during rehab, he can certainly be brought in as a situational pass rusher to spell McDonald or Smith.

3. When will the Niners cut ties with Asomugha?

"If" seems like a foregone conclusion, the real question is "when". The 49ers are crowded at the cornerback position and Tramaine Brock has really upped his game, snatching the nickel cornerback role away from Asomugha while the long-time veteran was nursing an injury. Offseason acquisition Eric Wright has been practicing since last week and figures to be a future starting prospect for San Francisco considering Tarell Brown is a free agent next year, andCarlos Rogers is due over six million in 2014 (the final year of his contract). The 49ers gave Asomugha a fair shot to prove himself, but marred by sub-par play and injury, the team just doesn't have the room for the past-his-prime cornerback.

In having to free up roster space for players returning from injury, expect San Francisco to send Asomugha packing in the next couple weeks.

4. Will Vance McDonald see an expanded role in the passing game? 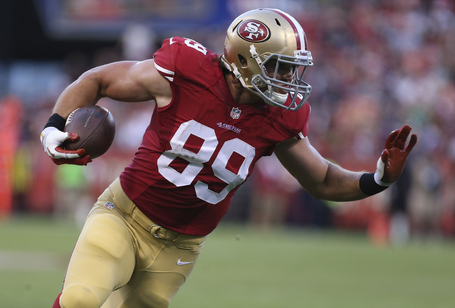 The 49ers were very high on McDonald coming out of the draft this year, evidenced by moving up in the second round to select him. Heck, Jim Harbaugh went as far as to compare him to Hall of Fame tight end Mike Ditka, but McDonald has yet to shine as a receiving threat through seven weeks of the season. To date, McDonald has six receptions for 86 yards and no touchdowns.

Obviously, McDonald's primary role has been as a blocker in two-tight end sets, and that's not surprising considering the rookie's massive frame. But with a dearth of receiving options outside of Vernon Davis and Anquan Boldin, you would think San Francisco would be looking for more ways to get him the ball. Maybe his route running isn't up to snuff; maybe he isn't gaining separation. Whatever the reason may be, the bottom line is that Kaepernick has not looked his way in the passing game very often at all. Hopefully, we see more of McDonald and he can prove himself as a viable option in the passing game; especially as a big target inside the redzone.

Last week's game provided some comfort, as the third-year quarterback darted through the Titans defense en route to a 20-yard touchdown, but what is the deal with Kaepernick's foot injury? Leading up to the game, he dryly quipped that it was a hangnail on both of his pinky toes. Funny stuff, but it still leaves the true nature of his ailment (big or small) a mystery.

Earlier in the season when Kaepernick was struggling, I questioned what impact, if any, the foot injury had. Was it slowing him down or causing him to be hesitant? Lord knows Harbaugh (taking cues from the Bill Belichick school of concealment) would never divulge any more than he's obligated to about an injury, and I wouldn't expect or want him to, but it can lead to some frustration in not knowing the true extent of injuries. Thankfully, Kaepernick looked much better against Tennessee but it's an injury report item worth monitoring moving forward.

6. What does the future hold for LaMichael James? 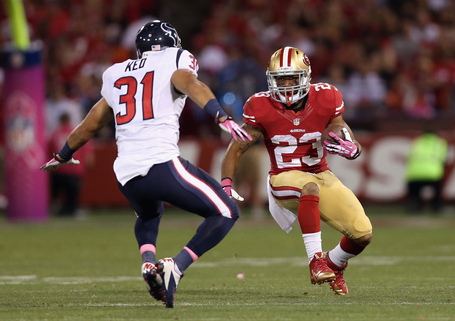 The second-year running back was a healthy scratch last week against Tennessee and has seen very minimal action this year, despite a 49ers offense that could desperately use some explosiveness. James has tweeted out some cryptic grievances, seemingly directed toward his role with the 49ers, but usually ends up deleting them and denying any sort of relation to football. With Kendall Hunter back in the lineup, it's difficult to forecast a role for James. The coaching staff may not be too keen on his blocking ability and ball security (for ball security, please see Super Bowl XLVII), and on a team like the 49ers those are paramount attributes. As the trade deadline looms, it will be interesting to see if the 49ers deal James for a draft pick, package him to obtain a wide receiver, or keep him on the roster.

7. Is Phil Dawson an upgrade over Akers?

Several months ago, it would have been ludicrous to pose such a question but seven weeks through the season, Phil Dawson has been a bit underwhelming. To be fair, he is still a largely unknown commodity-the 49ers have only attempted 12 field goals this season-but the early results have been lackluster. His 75% field goal percentage ranks 29th in the league, and after a 2012 campaign in which he was perfect from 50+ yards (7 of 7), he's 0 of 2 from beyond that distance this season. His 19 touchbacks through seven games is middle of the road, as the 49ers rank 16th in this category.

Akers, meanwhile, is 78.6% on field goal attempts, 2 of 2 from beyond 50 yards, and has 24 touchbacks on the year (ranking Detroit 9th in the league). Now I'm not saying the 49ers should have held onto Akers; he could not have left San Francisco quick enough after his paltry 2012 campaign. What I'm questioning though is, did the 49ers get better at the kicker position? The stats suggest they haven't. As I mentioned, the jury is still out on Dawson because he hasn't been utilized all that much (which usually means more touchdowns, so I'm not complaining), however, the 49ers may have been wise to sign a younger leg instead of another middle-aged kicker.