With all of the talk about Matt Schaub's pick-sixes, we figured it was high time to take a look at the coaches' film from each of his interceptions.

Share All sharing options for: 49ers vs. Texans: An All-22 look at each of Matt Schaub's INTs

Houston Texans quarterback Matt Schaub has had a rough go of it lately. Not only has he thrown an interception in each of his first four games, but he's also had one of said INTs returned for a touchdown in each of the last three games.

As if this wasn't enough, a Houston restaurant added insult to injury with a sign advertising a Schaub burger special: Pick-six toppings, pay for it later.

No, this isn't at Richard Sherman's house. It's at a Houston area restaurant. pic.twitter.com/lo32Cg4kBS

Some feel that Schaub has never really been that great of a QB - that his recent play is confirmation of this. No matter what side of the fence you're on with Schaub, I figured it was time to take a look at the coaches' film from each of his 2013 INTs. As is usually the case, we don't know the play-call, including route adjustments, etc. But we'll still try to get some clues as to why these passes were picked-off.

Schaub's first interception came on his first play of the 2013 NFL season. Tough luck, eh? You can see below that linebacker Jarret Johnson spies the QB the whole way. 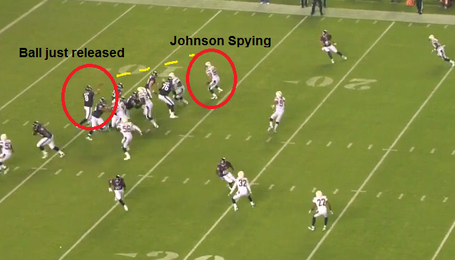 Johnson makes an athletic play and tips the ball to teammate Cam Thomas for the INT.

Decide for yourself whether or not Schaub should have realized he had a spy and made a different decision here. One theme I'm noticing, though, is that there are quite a few designed plays where Schaub seems to have one primary read, and he doesn't usually come off of that read.

Schaub's next INT came in the second game of the year, vs. Tennessee. It was the second quarter, first down at the 50 yard line. He get's pressure, a lot of it, right in his face. This doesn't end well for Houston as Schaub throws the ball to a curious spot on the field where nobody from his own team was located. The other strange part is that nobody was even headed there. Perhaps it was the wrong route by a receiver, but you'd think Schaub could see which direction his guys were running and realize it wasn't to where he threw the ball. 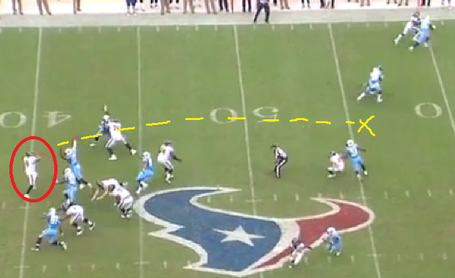 The underneath receiver had just sat down and started moving toward the bottom of the screen. The other receivers were running verticals and didn't stop, nor would they have had any chance to get to this spot. Making things worse is the fact that the defenders all had leverage to the side where the ball was thrown. There wasn't a snowball's chance in hell this was getting caught by a Texan.

Here's the INT as it was caught by the defense: 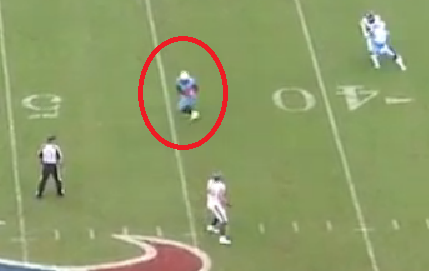 But that wasn't all the generosity Schaub had for the Titans on this day. In the third quarter Houston faced a 3rd and 21 from their own 10 yard line. Not a pretty situation to be in for a QB. Schaub throws a pass well short of the sticks, again to a receiver that just kept running. The corner read his eyes the whole time, stopped, and the ball went right to him. This was the first of the famous string of pick-sixes Schaub has thrown over the last three games. 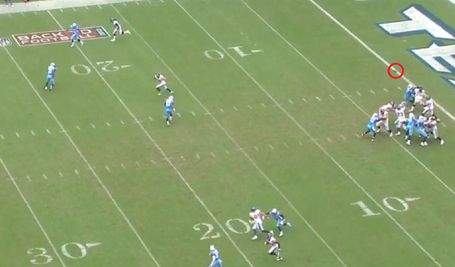 At the point when Schaub threw this pass, even if he had thrown the go route, there was help over the top. He obviously thought his receiver was stopping somewhere near the "Back to Football" logo on the screen, because that's where he threw it. This would have been well, well short of the first down anyway, but it seemed like Schaub hurried the throw. With the defender's hips turned, the come-back probably would have been complete, though, so it's hard to say if the receiver ran the wrong route, Schaub got the play wrong, or the WR decided to option to a go route, which Schaub clearly did not expect.

Here's the INT when caught: 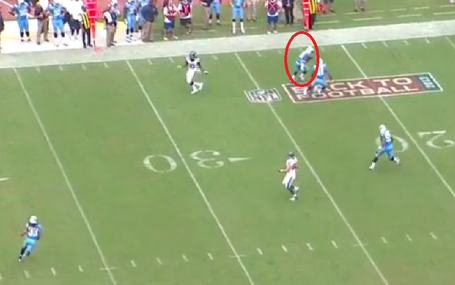 Next up was Baltimore. Houston had 1st down at their own 35 yard line when Schaub made a bad decision throwing into coverage. The defender was sitting right where the completion would have to occur, and he easily beat the tight end to the spot for yet another pick-six. This ball was thrown well in front of the receiver, too. Had it been thrown to his back shoulder, there is a chance it's caught by the offense instead. 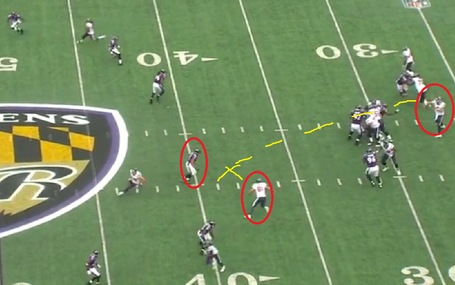 Then we have the most recent game against Seattle, where Schaub delivered two gifts to the defense. The first came on 3rd and 5 from the Seattle 18. The pass was right at the sticks and clearly designed to get the first down (duh). The only problem is that there were about 73 Seahawks players in the area, and the pass was again thrown near the defender's leverage. 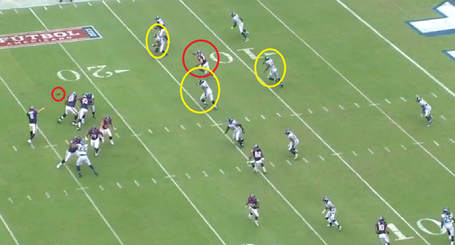 There were so many Seahawks near the play that they couldn't decide who should intercept the ball, and instead batted it around before Earl Thomas finally came down with it. The ball was thrown in front of the receiver again, as mentioned, and K.J. Wright was already moving that way. Had it been thrown slightly behind, who knows, but it might have had a chance.

The next INT was the one I'm sure we've all seen. It was the fourth quarter, 2:51 left in the game, and Houston had 3rd and 4 from the Seattle 40. Schaub had heavy pressure after the play-action fake and in-turn threw up a pass to the outside with very little mustard on it, again, to the defender's leverage. Richard Sherman broke on the poorly-thrown ball and raced off to a touchdown, crushing Houston's chance to put the game away (they were up by seven points at the time). 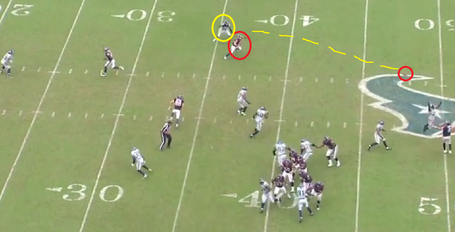 Again, you can see he threw it right to Sherman's leverage. Up seven points, you wonder why he doesn't just crumple and take the sack. You've got to trust your defense over throwing a dangerous pass.

You can see that most of these passes were of the short variety. It seems that Schaub doesn't always have a good grasp of the defenders who are in the area where the ball is going. Quarterbacks routinely make some of these throws, despite being contested, but the placement must be precise.

The other thing you'll notice is that more than one of these INTs came with significant pressure in his face. I'd expect the 49ers to use timely blitzes in order to see if they can get Schaub to throw up some more prayers, and have a shot at picking-off one or more of them.