The Booth Review - 49ers vs. Texans

“We play together and we play to win. And that’s what I love about this team.”

Share All sharing options for: The Booth Review - 49ers vs. Texans

Welcome back to The Booth Review. The San Francisco 49ers continued their strong rebound with a rout of the Houston Texans on Sunday Night Football. We saw another big week for the running backs and a phenomenal performance by the defense. What did we learn?

Football is fun when you're winning games. When you're losing, it's a miserable time for everyone.

Just five weeks into the regular season, the San Francisco 49ers have already experienced the lows of defeat and the highs of victory. After consecutive losses - a first for the Jim Harbaugh regime - against the Seattle Seahawks and Indianapolis Colts, I think we were all ready to line up on the Golden Gate Bridge.

But San Francisco has been on the rise since their statement win over the St. Louis Rams two weeks ago. And they continued their climb with a convincing rout over the Houston Texans on Sunday night.

Lately, the Niners have been winning. They're winning on their terms, playing their brand of football, and they're having plenty of fun in the process. 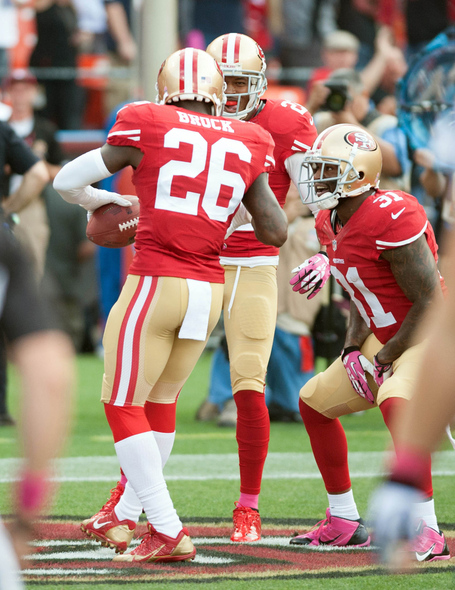 The defense had an enormous day, and the tone was set right from the start.

On Houston's opening drive of the game, a graphic flashed across the screen informing us that Matt Schaub had thrown a pick-six interception in the last three consecutive games. Just moments later, Tramaine Brock would make that four.

Brock was initially covering slot receiver Keshawn Martin, but turned his head in time to see Schaub gunning for Andre Johnson. Brock cut right in front of Johnson for the easy pick and return for a touchdown. Just like that, not even two minutes into regulation, San Francisco is up 7-0.

But Brock wasn't done there.

About halfway through the second quarter, the Texans offense had just crossed midfield. On first-and-ten, Johnson ran a short curl route by the right sideline with Brock in coverage. Brock's eyes were locked on Schaub the entire time even as he was backpedaling. As soon as Schaub lets go of the ball, Brock is already sprinting in the opposite direction. He cuts right past Johnson, slaps the ball into the air, and tracks it about five yards through the air before making his second interception of the day.

The Niners offense took the field after the turnover and scored once more to widen the margin.

Once [Nnamdi Asomugha] went down, it was [Tramaine] Brock that supplanted him and thrived.

Brock continued to impress through the end of the first half. Running alongside former first-round selection DeAndre Hopkins, Brock was able to keep pace, stride for stride, and had the inside track. Hopkins knew that Brock was in a better position to make a play on the ball, so he resorted to pushing off of Brock's shoulder to catapult himself into the air. Hopkins is the one to make initial contact on the ball, but Brock is relentless. He wrestles it away from Hopkins and knocks it down for the incomplete pass. It was a tremendous effort by Brock through all phases of the play.

Of course, it's unlikely that Brock would have even played as much as he did had Nnamdi Asomugha not been injured. Asomugha was the original nickel corner, but once he went down, it was Brock that supplanted him and thrived.

"I just came in and did my job to try to step up in the place of the nickel back Nnamdi Asomugha. I just did my job and played with my teammates," said Brock. "Everybody wants to shine. Everybody wants to play and make plays. So when it's our time, we all just try to make plays and show the other guys and the coaches that we can do that." 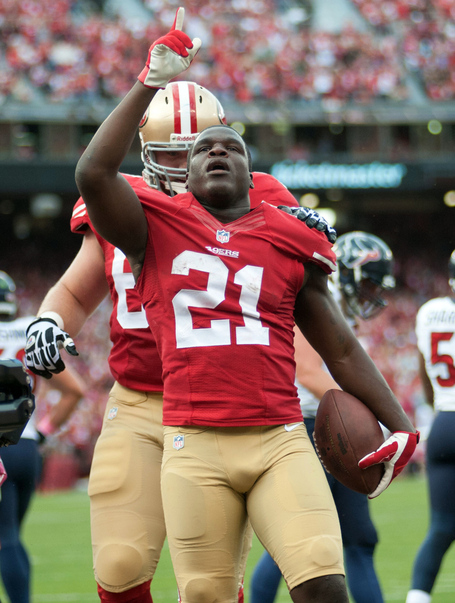 For the second straight week, San Francisco's run game was firing on all cylinders, and each back had a turn at the helm.

Frank Gore got the majority of the carries which shouldn't be a surprise to anyone. What is surprising is how, at 30, he's cracking off some of the best runs you'll see from any running back in the league today.

On Gore's best days, he is poetry in motion. Chicken noodle soup for the football fan's soul. An absolute pleasure to watch. And for the Faithful who have been paying attention, it's all the more satisfying knowing how frustrated Gore was during the team's brief losing streak. In recent weeks, he's running hard like the Frank of old, and it looks like he's having a great time doing it.

"The one thing I think we can pride ourselves on is our run game. We have the best running back in the NFL." - Alex Boone

"The one thing I think we can pride ourselves on is our run game," said guard Alex Boone. "We have the best running back in the NFL [he points to Gore] and a physical offensive line. So that's one thing we've got to stick with."

After the second interception by Tramaine Brock, San Francisco found themselves at the goal line. They went with their "heavy jumbo" run package that featured two extra offensive linemen, Adam Snyder and Daniel Kilgore, on the right side with tight end Vernon Davis on the left side. The formation appeared to favor a run to the right, and that's exactly how the Texans anticipated it. Instead, Boone pulls left along with fullback Bruce Miller to pave a clear path for Anthony Dixon who high-steps into the end zone for the score.

Kilgore, Anthony Davis, and Colin Kaepernick rush Dixon and hoist him into the air.

My favorite run of the entire night came about halfway through the third quarter with San Francisco at Houston's 41-yard line. Through the cutting edge powers of Microsoft Paint, I've illustrated this play for your viewing pleasure:

If someone looked at the stat sheet after the game without having watched the actual game, they would probably be scratching their head and wondering how the Niners were able to win by such a large margin considering Colin Kaepernick's lack of production.

Kap finished the day having completed 6 of 15 attempts for 113 yards and a touchdown. That single touchdown was on a 64-yard reception by Vernon Davis in the fourth quarter. Simple math says Kap had just 49 passing yards heading into the final quarter of the game. What?

Kaepernick's numbers are rather underwhelming, but it's not because he played poorly (he actually completed some pretty spectacular throws). The team simply didn't need him to produce.

San Francisco got on the scoreboard early - less than two minutes into the game - and stayed on top through a steady and effective running game and a dominating defense that forced four turnovers. It's the Niners' bread and butter, their modus operandi over the last several years. And if the team keeps it up, Kap won't have to throw 400 yards every game to stay on top of opponents.

Heading into next week's matchup against the Arizona Cardinals, we have more to be excited about than what we have to be afraid of. It would appear that the defense is finally rediscovering their identity (without the help of Aldon Smith and Patrick Willis) and the run game is hitting its stride at last.

It's not quite perfect. But when you're winning games, it's hard to complain. 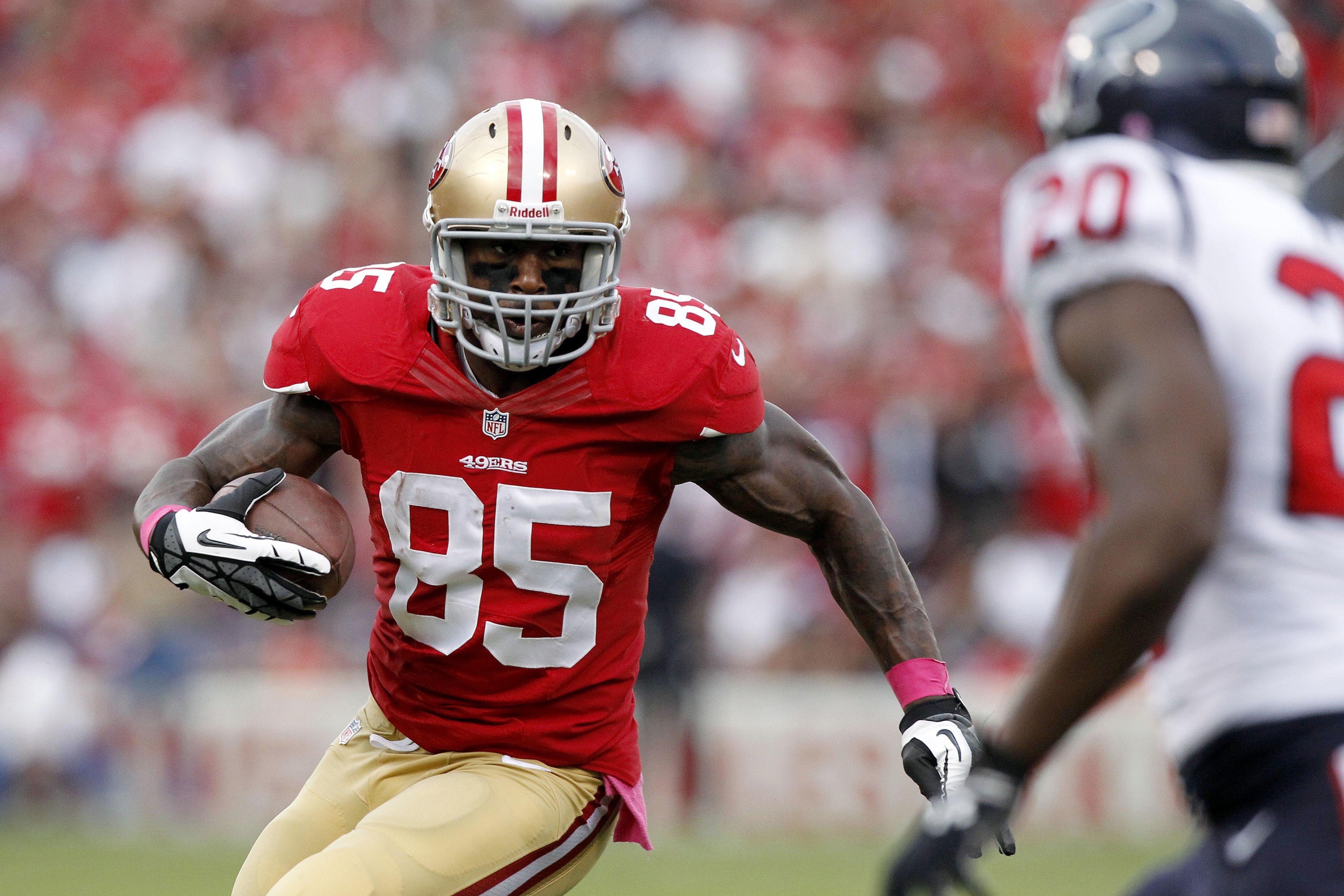 Will the 49ers keep up their dominant run defense in 2022?