49ers vs. Texans: All 22 film breakdown of the 49ers 3 interceptions of Matt Schaub

Examining what happened on the three interceptions that changed Sunday's game versus Matt Schuab and the Texans. New to Niners Nation? Sign up here and join the discussion!

Share All sharing options for: 49ers vs. Texans: All 22 film breakdown of the 49ers 3 interceptions of Matt Schaub

With the absence of Patrick Willis, Aldon Smith, Chris Culliver and Ian Williams, the 49ers defense seemed to have excuses for failing to meet the lofty standards they have set over the past two years. Despite these significant loses, the 49ers defense stepped up and delivered their best game of the year so far, by forcing four turnovers.

While the Texan's zone blocking running game was effective, the play of the secondary, primarily Tramaine Brock, was outstanding. Given the opportunity to play as the 3rd corner due to Nnamdi Asoumgha's injury, Brock cemented his place on the depth chart with an outstanding performance.

His quick feet and ability to read the quarterback while in coverage proved to be the difference in the game (playing Matt Schaub also helped). He accounted for two of the four turnovers forced by the 49ers, and help them win convincingly despite only completing 6 passes on offense. Here is the first interception where Brock shows great route recognition and anticipation to undercut and intercept Schaub en route to his first touchdown.

Pre-Snap: The Texans are in their 11 personnel with WR Keshawn Martin motioned out wide right, WR Andre Johnson in the right slot, WR DeAndre Hopkins out wide left, QB Matt Schaub in the shotgun with RB Arian Foster to his right and TE Owen Daniels to his left. The 49ers are in their nickel package with CB Carlos Rodgers covering the slot, CB Tramaine Brock covering Martin, CB Tarrel Brown covering Hopkins and both SS Donte Whitner and FS Eric Reid playing deep zones. 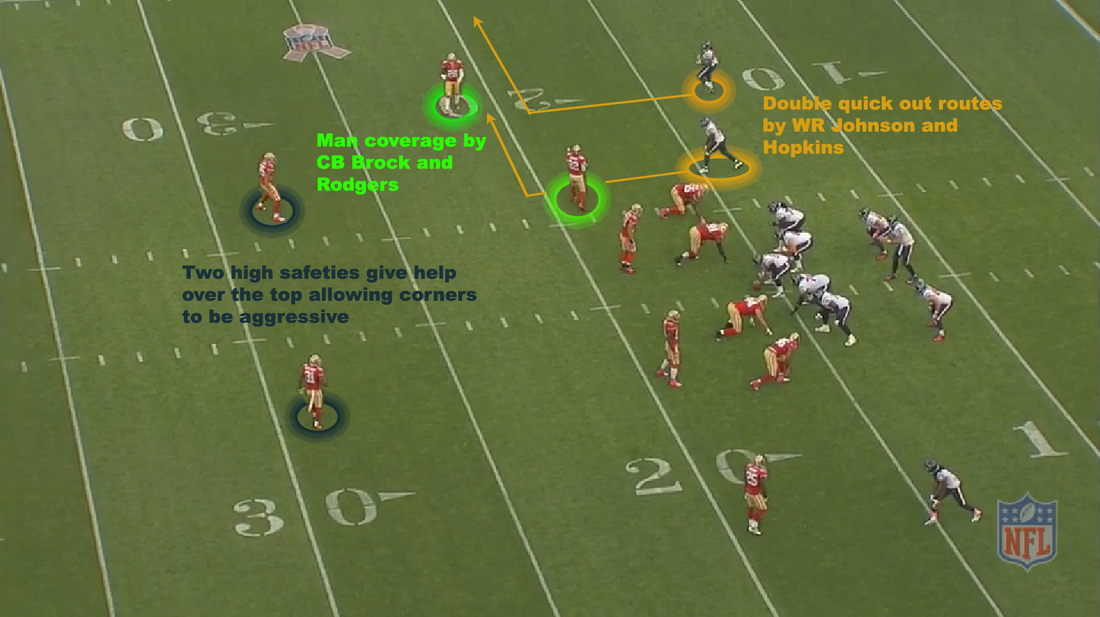 Post-Snap: The 49ers rush four while dropping seven into Man 2 coverage, man on man with 2 high safeties. On the right side, Martin and Johnson run quick 5 yard outs right along the first down line. 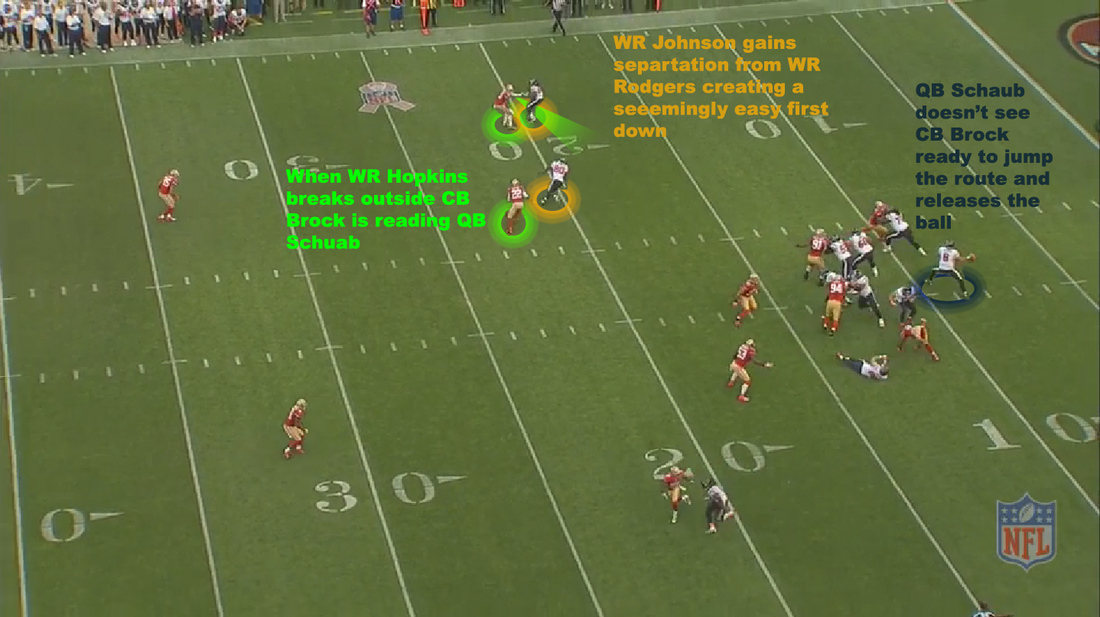 As Martin begins to break outside, Brock shifts his attention from Martin to Schaub. Schaub is looking down Johnson, who has gained separation from Rodgers, and begins to release the ball. 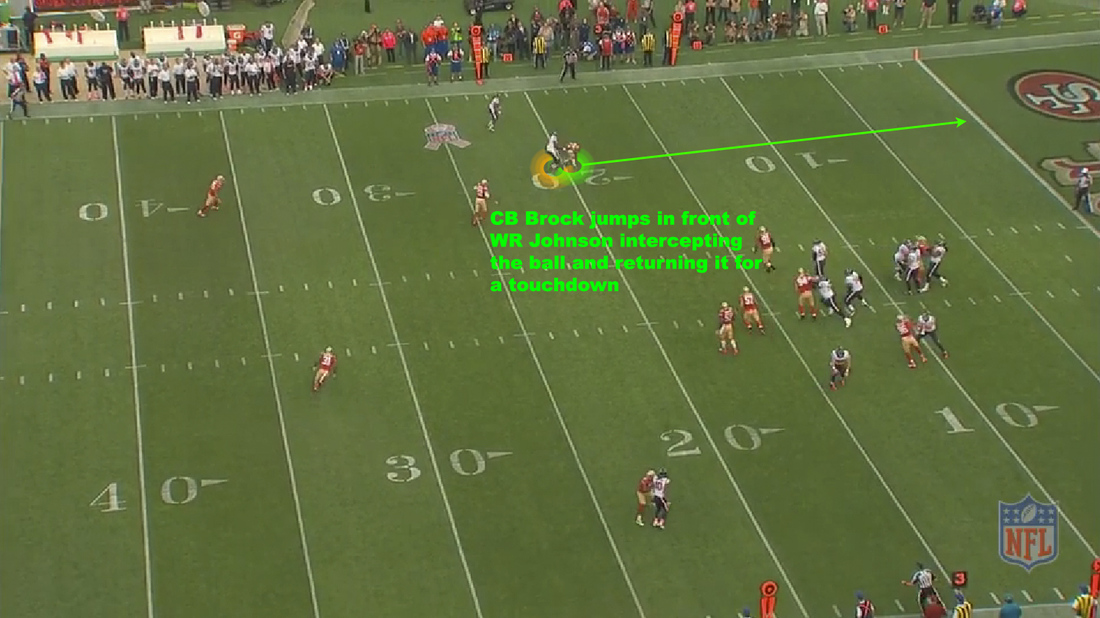 Brock who is all but forgotten Martin, anticipates Schaub's throw to Johnson and breaks on it before the ball is even released. Brock undercuts the route and intercepts the ball in stride towards the endzone. With no one in front on him Brock waltzes into the end zone for a defensive touchdown.

Summary: While the blame will surely fall on Schaub for throwing this pick, the main reason behind the interception was Brock's superb play on the ball. On this play he demonstrated great anticipation, route recognition, ball skills and the confidence to leave his receiver in order to jump another receiver's route, all in a matter of seconds.

It started when Brock's man began breaking outwards. Brock then immediately shifted his focus from Martin to Schaub, as if he knew what was going to happen next. This reaction is primarily the result of two factors; great preparation, film study probably led him to know that the Texans often run the double out route combination, and safety help over the top allowing him to be aggressive. Combine the scheme, knowledge and great execution by Brock and the 49ers were off to a dream start.

A quarter later, Brock made yet another excellent play on a Schaub pass. With the Texans nearing midfield in a two score game, Brock undercut a quick hitch by Johnson for another pick that changed the game completely.

Pre-Snap: The Texans are in their 21 personnel with RB Foster motioned out wide left, WR Johnson out wide right, WR Hopkins in the right slot, TE Daniels inline right, QB Schaub under center and RB Ben Tate in the backfield. The 49ers respond with their nickel package with CB Brown on Foster, CB Rodgers on Hopkins, CB Brock on WR Johnson all playing off coverage and FS Reid playing single deep coverage. 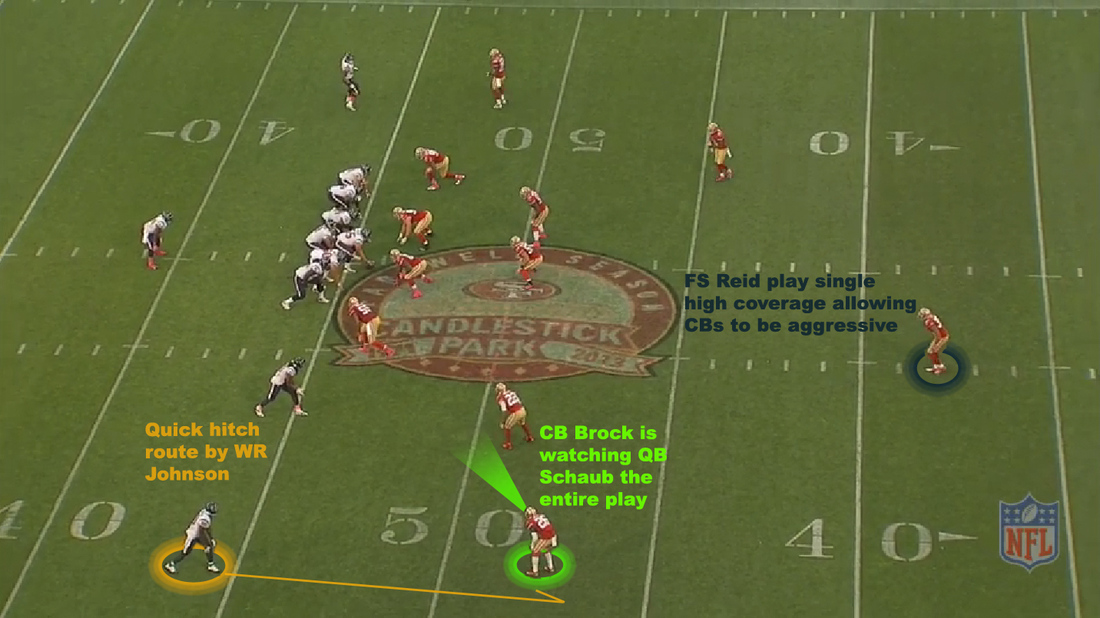 Post-Snap: Schaub drops 3 steps back in the pocket while looking middle to hide his intended target. While he is dropping Johnson runs 5 yards downfield before turning around on a quick hitch route. QB Schaub shifts his vision right to Johnson as he reaches the top of his route. 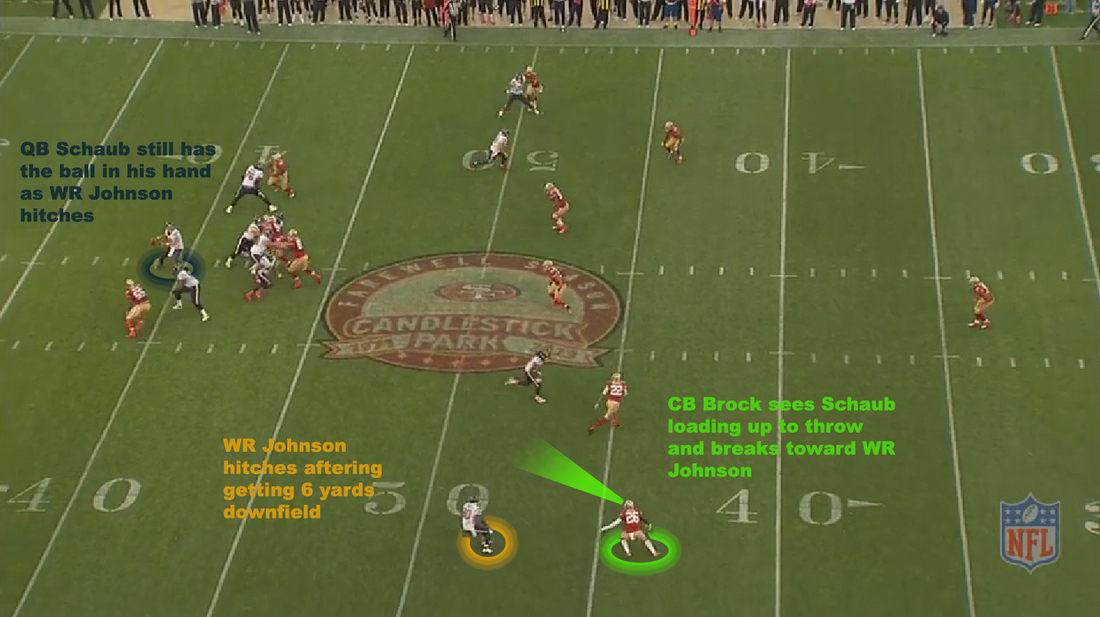 Brock, who has been watching Schaub the entire play in off coverage, explodes forward as Schaub prepares to release the ball. By the time the ball leaves Schaub's hand, Brock has already shifted his momentum and is breaking on the ball. 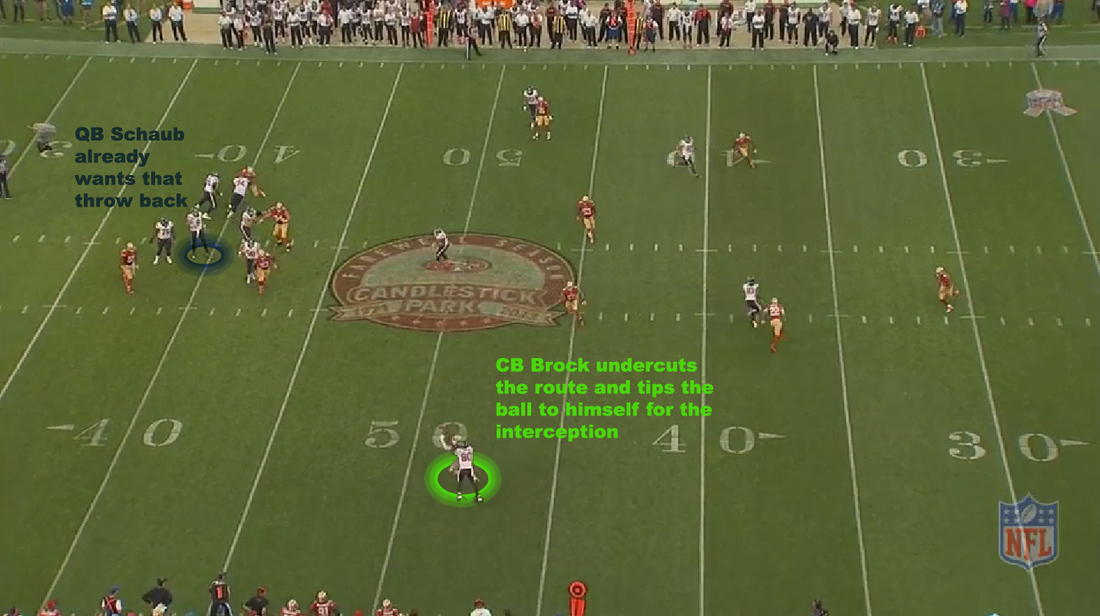 As the ball arrives Brock is in between intended target Johnson and Schaub. Brock deflects the pass upward and chases it down for an interception, that he returns 17 yards down the sideline before getting tackled from behind by Johnson.

Summary: While the first interception was primarily a great play by Brock, this interception was completely on Schaub. He failed to realize the coverage and compounded that error with a late throw that lack velocity.

Presented with an opportunity by Schaub, Brock took full advantage shortcomings. He broke beautifully on the pass and managed to undercut the route in time for an interception. Had he caught the ball cleanly it surely would have been his second pick six of the day.

Aggressive Scheme: A usually conservative defensive coordinator, Vic Fangio decided to take advantage of Schaub's crumbling confidence with a zone blitz. Zone blitzes are based upon the premises of showing an all out blitz only to have a defensive linemen drop into an underneath zone coverage. The quarterback who is reading blitz the whole way and not expecting a defensive linemen to drop into coverage will then throw over the middle into coverage. Check out how this zone blitz was executed perfectly and resulted in Schaub's third pick of the day.

Pre-Snap: The Texans are in their 02 personnel with WR Johnson out wide right, WR Hopkins in the right slot with TE Daniels, WR Martin out wide left, TE Garrett Graham inline left and QB Schaub in an empty back shotgun. The 49ers respond in their nickel package showing an all out blitz with 6 men crowding the line of scrimmage and 5 defenders in deep zones. 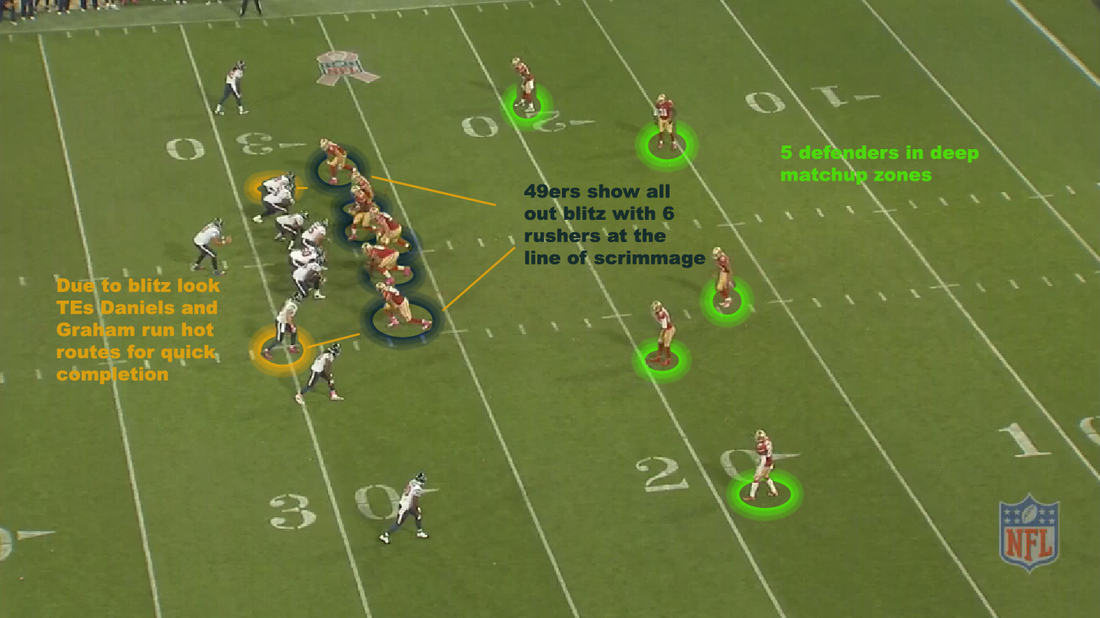 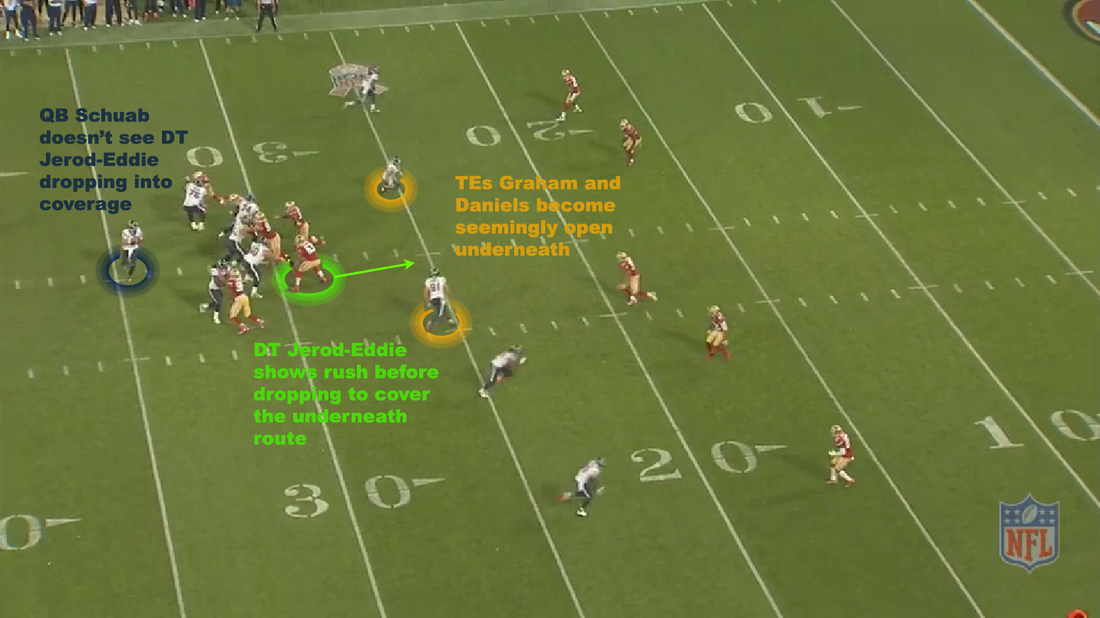 After starting forward, to occupy a blocker, DT Jerod-Eddie backpedals into an underneath zone coverage. Not expecting a defensive lineman to drop into coverage, Schaub plants his back foot and fires a throw to TE Daniel over the middle. 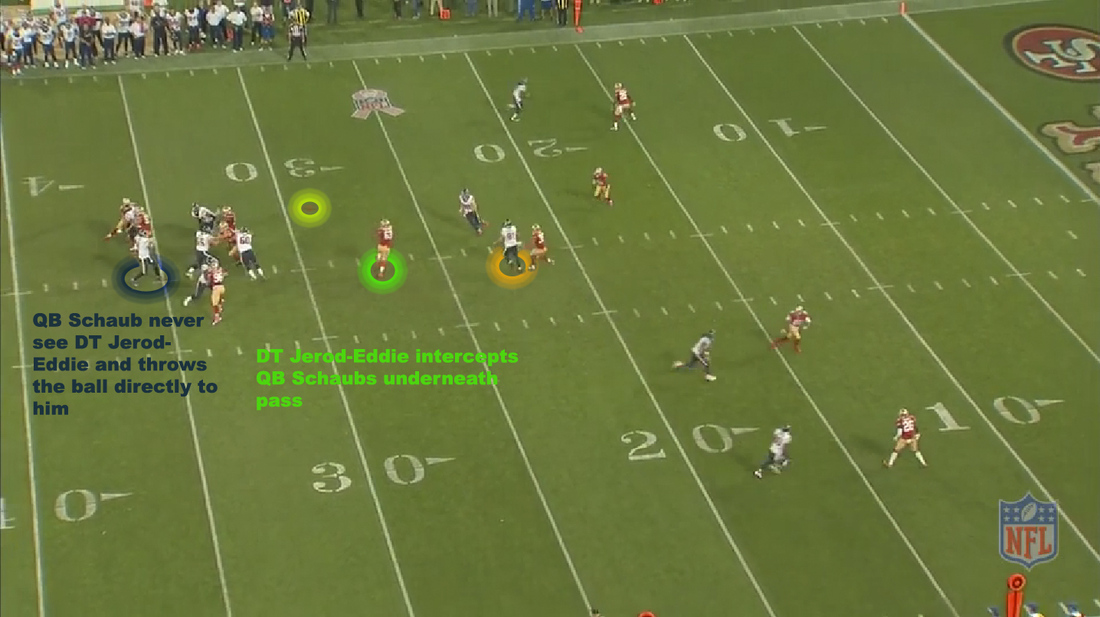 Summary: Vic Fangio decided to pull the zone blitz out to completely demoralize Matt Schaub and finish off the Texans. Having been picked off twice already throwing routes outside the numbers, it was predictable Schaub would take an easy completion over the middle on third and long facing a blitz. The underneath drop by a DT in a zone blitz was the perfect call given the circumstances and resulted in another turnover for the Texans offense.

Wrap Up: The statistic most correlated with winning in the NFL is turnover ratio, teams that force more turnovers than they commit win 75% of games. Outstanding in both forcing and limiting turnovers over the past 2 seasons, the 49ers were uncharacteristically -4 turnover ratio entering Sunday's game. After causing four turnovers and committing none, the 49ers managed to even their turnover difference and not surprisingly pull above .500 for the year.

While Matt Schaub had a large part to do with this improvement, the 49ers, Tramaine Brock in particular, played aggressively on defense. Through Brock's great anticipation, Whiter attacking the ball carrier and Fangio's perfect use of a zone blitz the, 49ers defense forced the turnovers that broke the back of the Texans and ultimately won the game.

All in all, Sunday night's performance resembled the 2011 49ers team that bullied teams on defense and played conservatively on offense with a focus on limiting mistakes instead of making plays. Whether that strategy will continue, or even work with our current personnel, especially Colin Kaepernick, is yet to be seen, but it was refreshing to see the 49ers defense find its way without key starters.