"We’re still asking, how we can get better?"

Share All sharing options for: The Booth Review - Midseason Edition

Welcome back to The Booth Review. The San Francisco 49ers return stateside after dismantling the Jacksonville Jaguars in London. Heading into the bye week, the team stands at 6-2. What have we learned? What can we expect for the rest of the year?

And just like that, the season is halfway over.

It really didn't seem that long ago that Colin Kaepernick was caught in a dogfight with Aaron Rodgers, setting career-best passing totals in the process. Neither did the consecutive losses to Seattle and Indianapolis that had the Faithful crying doomsday. We can't forget about Aldon Smith's DUI arrest and subsequent departure from the team. And what about the emergence of sensational rookie safety Eric Reid?

It seems like so much has happened in the span of eight weeks yet, all at once, it feels like nothing at all in the blink of an eye. In reality, through eight weeks of the 2013 season, San Francisco has endured more, on and off the field, than either of Jim Harbaugh's first two years. I truly believe that. 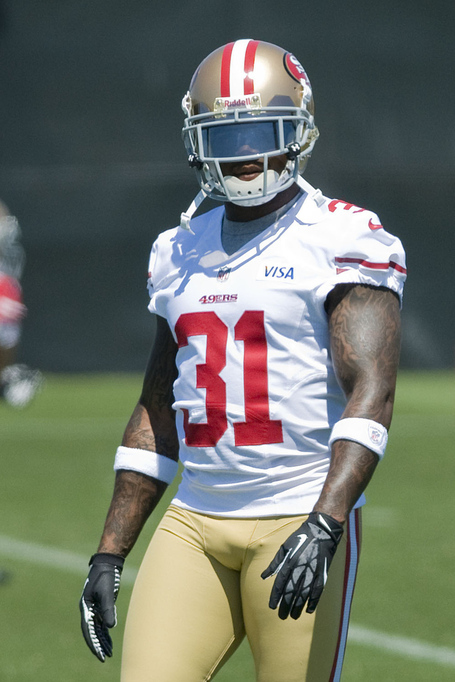 "We feel like we've been tested," said Donte Whitner. "We've been through a lot of adversity early in this football season."

In 2011, San Francisco reached the NFC Championship game. In 2012, they reached the Super Bowl. It only stands to reason that they take the next - and last - step this year.

"We understand what our goal is, and our goal is to win a Super Bowl," continues Whitner. "We wanna be the last team standing."

Those are incredibly high expectations. They don't get any higher. In spite of that, the Niners have played very well lately having won their last five games by a comfy margin (an average difference of 22.6 points). What's more, they've done it without their best pass-rusher and top receiver.

But how else does a team cultivate identity and unity than through staring in the face of hardship? Such are the circumstances in San Francisco. However, they will be better off for it in the long run.

"We understand what our goal is, and our goal is to win a Super Bowl." - Donte Whitner

San Francisco stumbled out of the gate. As a consensus No. 1 or No. 2 in the preseason power rankings, they suffered a dramatic fall during their brief losing streak in which they were outscored 56-10. Since then, they've flipped the script, outscoring their last five opponents 174-61.

After deviating from the formula for the first few weeks, the team is back to the tried and true Niner-brand of football - the running game. It's certainly no coincidence that when they strayed from it, they suffered. And when they returned to it, they rediscovered dominance.

It should no longer be a surprise to anyone: success starts with Frank Gore and ends with Kendall Hunter. If there is one thing we've learned about this team over the last five weeks, it is precisely this. No matter how much Jim Harbaugh or Greg Roman try to prove otherwise, the running game remains the essence of Niner football. And they would be wise to remember that moving forward.

The Niners are a run-first team and that's what they should be. They might be going against the grain in that regard, but who cares if they're winning a different way...as long as they're winning? Let Drew Brees and Peyton Manning and Tom Brady throw for 400 yards every Sunday. I'll take Gore rumbling through the middle, into the end zone, any day of the week. 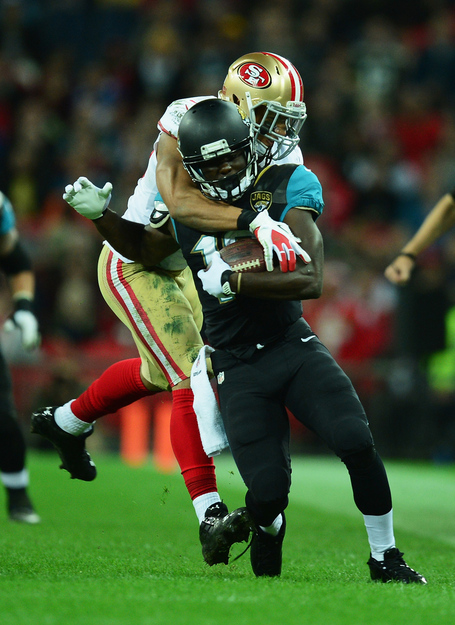 It was a business trip for Jacksonville. For San Francisco, it was something more like a field trip.

Let's be real - I don't think anybody was necessarily surprised by the final score. We shouldn't completely discount their efforts, but...the Jaguars played about as well as anybody would expect an 0-7 team to play.

For all intents and purposes, it was an opportunity for San Francisco to 'sharpen the knives', so to speak.

"We're still asking, how we can get better?" said Jim Harbaugh. "Not at this stage, at the halfway mark [should we have] the answers. We've still got questions."

Lately, it seems like the question has been, 'What do we do with an insurmountable lead? When do we let off the pedal?' San Francisco has been scoring at will against opponents, averaging 35 points a game over the last five weeks.

Against Jacksonville, they led 28-0 by the middle of the second quarter. Passing was luxury at that point which also explains why Kaepernick completed just ten passes all game.

Along with Gore and Hunter, Kap contributed most to the victory with his legs. The three of them combined for 35 carries, 209 rushing yards, and four rushing touchdowns.

"He's done a phenomenal job in all regards. He keeps getting better.," said Harbaugh. "It seems like it's weekly now, game after game. Just consistently really good."

As a general rule of thumb, if you see Kaepernick smiling at all during a game, things are probably going pretty well. Against the Jags, he was all smiles all day.

Late in the second quarter, on first-and-ten, Kap broke out of the pocket and ran about ten yards up-field before sliding through the legs of linebacker Paul Posluszny. As Kaepernick gets up, he casually wipes the dirt off his glove, looks around, and smiles ear-to-ear before tossing the ball to the ref.

Football is back to being fun again, and that's a good thing.

THE CAVALRY IS COMING

Injuries, by their very nature, are unavoidable and unpredictable. Teams must adapt on the fly every time a player goes down. They are forced to change and adjust. There is subtraction, and then addition. With a bevy of players returning from injury, the Niners are about to experience the opposite of that.

The next few weeks, in particular, are going to be very interesting. In fact, it's already started happening.

Rookie defensive tackle Quinton Dial, who started the season on the team's non-football injury list, was activated on October 19. He had participated in just three practices before suiting up and playing later that week. The precedent was set - it can happen this quickly.

Similarly, second-round selection Tank Carradine should also be making his debut very soon. Carradine suffered a torn ACL during his last year at Florida State and started his rookie season on the sidelines. 'The Tank' was activated on October 29. 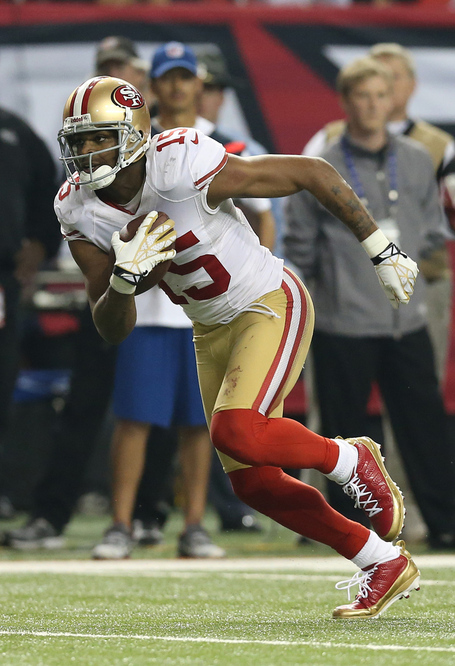 Most recently, and perhaps most importantly, Aldon Smith was activated on Thursday. As mentioned earlier, Smith spent the last five weeks away in a rehabilitation center after accruing quite a few alcohol-related run-ins with the law. Before returning to the team, Smith was expected to 'show significant progress', and apparently, he has shown enough.

With a banged up defensive line, Dial's debut is a welcomed one. And while Ahmad Brooks and Corey Lemonier have managed to maintain a steady pass-rush, it's only going to get better upon the return of Carradine and Smith. And these changes are only on the defensive side of the football.

On offense, we can expect to see Mario Manningham back on the field very soon as he's already started practicing.

Maybe best of all is the return of Michael Crabtree who has been the team's unquestioned No. 1 receiver over the last couple of years.

"Very optimistic," Greg Roman told KNBR recently. "I got a chance to watch him work out about a week ago and was very, very encouraged with what I saw."

Crabtree was the first Niners' receiver to crack the century millennium mark in receiving yards since that guy named Terrell Owens. And his absence through eight weeks of play has really hurt.

"Surprised would be a good word too, in the sense of just what he was doing and how he was doing it," Roman continued. "So that's very exciting as well. He's working real hard at it."

Crabtree is the final puzzle piece in completing the picture of a healthy San Francisco 49ers roster. And it won't be until his return that we find out this team's true potential.

In the meantime, the coaches will be tasked with finding ways to incorporate the aforementioned players as they become available. And with the bye week coming at a perfect time, they'll have a few extra days to think about it.

It's a good problem to have. They already know they're going to get better; they just need to figure out how.

Kawakami: The relationship between Garoppolo and Shanahan/Lynch went south leading up to the NFC Championship

Why Steve Wilks was a home run hire for the 49ers

49ers plan to hire Steve Wilks as their defensive coordinator