The Booth Review - 49ers vs. Panthers

Welcome back to The Booth Review. On Sunday, the San Francisco 49ers came up short in a defensive battle against the Carolina Panthers. What did we learn?

For most teams, it's a long season, full of peaks and valleys. For most fans, as much as we want our team to reach the peak and stay there, it's only a matter of time until they fall. On Sunday, the Niners not only fell...they fell flat on their faces.

To be fair, it wasn't all bad. In fact, we've seen much worse all-around performances this season alone. But considering context - San Francisco rode into Sunday atop a five-game winning streak, in addition to coming out of a bye week - it's difficult not to be disappointed.

The good news? The 49ers defense played exceptionally well. They held their end of the bargain. Take away Carolina's lone touchdown score of the day - a beautifully-designed, flawlessly-executed 27-yard scurry by DeAngelo Williams - and you have a pretty barren stat sheet. 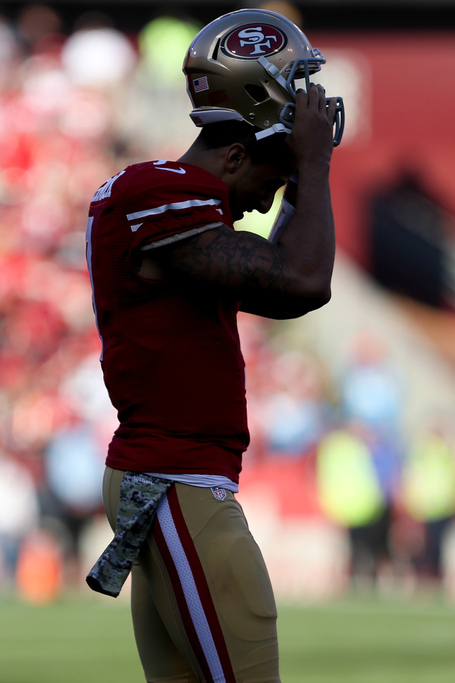 Cam Newton completed 50 percent of his passes for 169 yards and an interception and rushed for 17 yards - hardly plutonium-grade. Between Williams and Jonathan Stewart, neither back gained more than 50 yards on the ground.

But enough about Carolina's offensive shortcomings. Harp any more, and I'd be calling the kettle black.

After a two-week sojourn to Nashville, Tennessee and then London, England, the Niners finally returned home - two wins stronger - to Candlestick Park.

Over the previous five weeks, San Francisco punched in the heavyweight class, averaging 35 points and 357.6 yards per game. With an extra week of fine-tuning and preparation as well as the long-awaited return of receiver Mario Manningham, they appeared prime for an offensive explosion. Instead, we saw three yards and a cloud of dust, all day long.

"Moving the ball wasn’t coming easy for us today," Jim Harbaugh admitted. "It’s not a good feeling when you don’t prevail, especially when you had multiple chances to get it done."

What they so desperately searched for all day, but never found, was the big play. San Francisco's longest play of the game? A 17-yard run by Frank Gore on the opening drive.


"It’s unacceptable. We have a number of weapons on offense. We just didn’t execute offensively." - Anquan Boldin

Despite all of this, the game was never truly out of reach. San Francisco entered the fourth quarter with the lead before Carolina jumped on top. Even then, it was only a one-point deficit.

But San Francisco continued to sputter. At the start of the fourth quarter, the offense began at their own 44-yard line before a pair of penalties and a sack backed them up to their 25. The Niners had three more drives the rest of the game to make something happen. They never made it past their own 20-yard line.

"It’s unacceptable," said Anquan Boldin. "We have a number of weapons on offense. We got exactly what we saw on film. We just didn’t execute offensively." 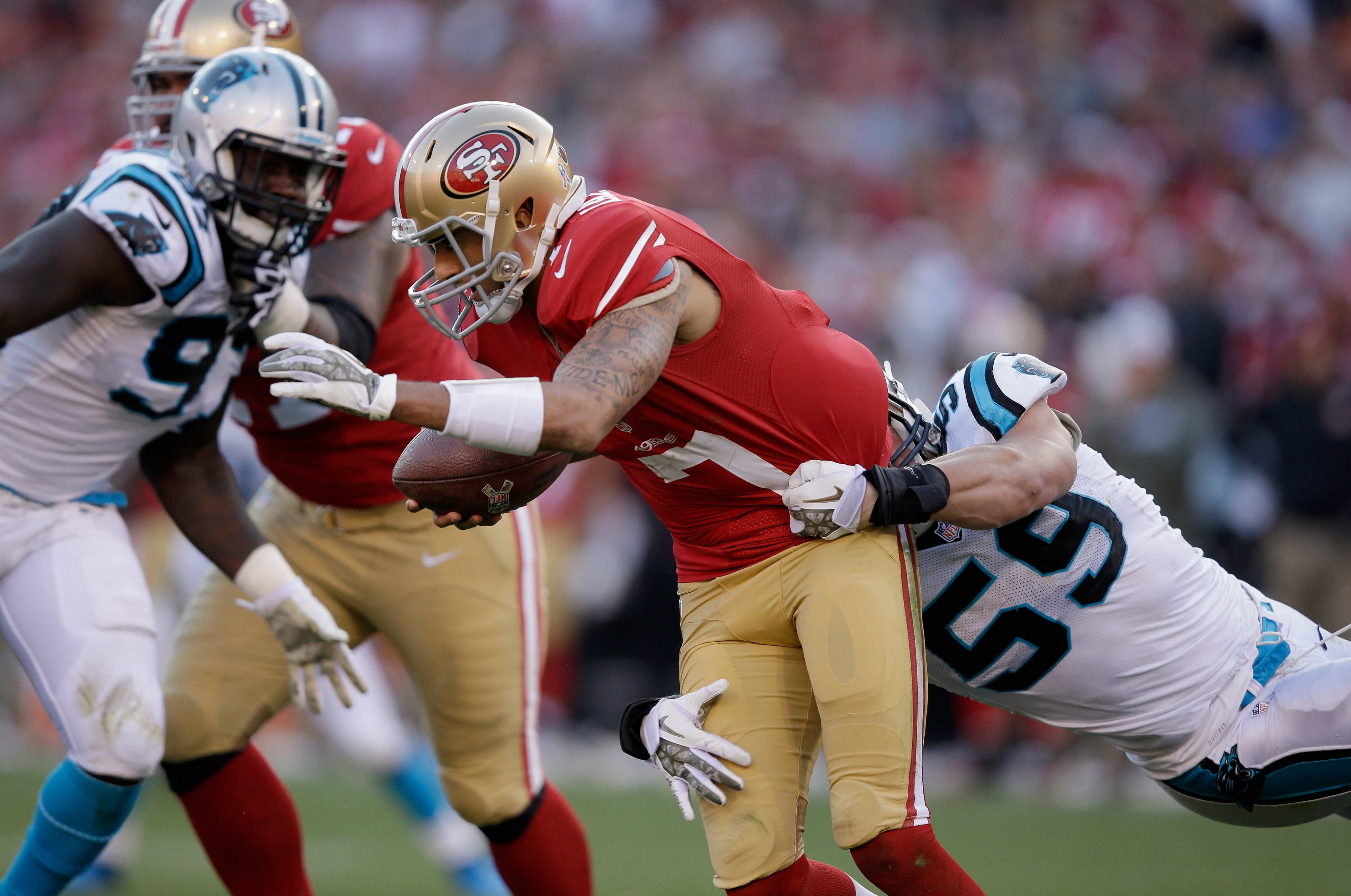 A BATTLE OF ATTRITION

While San Francisco certainly didn't do themselves any favors on offense, nothing should be taken away from Carolina's defense. They went toe to toe with one of the best defensive units in the league and, arguably, outplayed them.

"They're a good defense," said Kaepernick, "but today was more our lack of execution than what they were doing."

Considering Kap was sacked six times and held to just 46 net passing yards, we'll just have to agree to disagree.

As anyone should expect from a defensive battle, the hits were vicious and plentiful - San Francisco saw four players exit for the game as a result of injury.

On a controversial play halfway through the second quarter, Vernon Davis 'caught' a pass in the red zone, just yards away from punching in the game's first touchdown. Safety Mike Mitchell, in pursuit, threw his arm around Davis' shoulder and drove him, headfirst, into the ground. Davis walked off the field seemingly unperturbed, but he would not return to the game after exhibiting concussion-related symptoms. 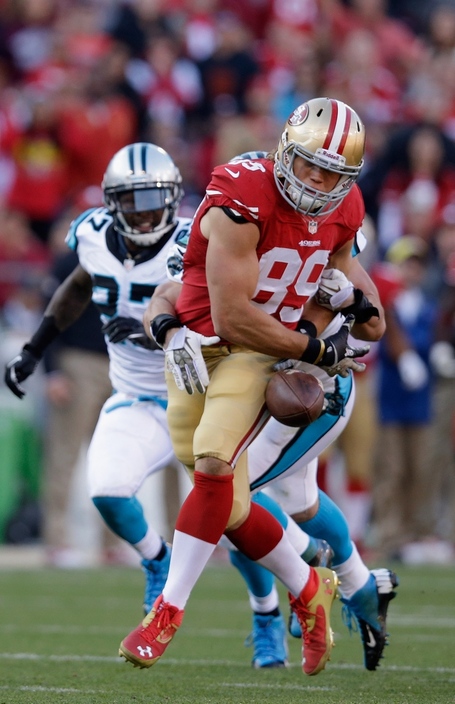 Another tight end, Garrett Celek, injured his hamstring on a punt return early in the first quarter and was also ruled out for the day. Harbaugh revealed after the game that the loss of both tight ends hindered play-calling and forced the offense to adapt on the fly.

"We really were out of a couple personnel groups that we would have liked to have been in at that situation, and we needed some time to move some personnel around," Harbaugh said. "That took us out of the two tight end packages. We made the adjustment at halftime to get [offensive guard Adam] Snyder into that role."

Defensive tackle Ray McDonald injured his ankle at some point during the first half and sat out the rest of the day. This is especially concerning since McDonald has been nursing a biceps injury for the last several weeks now.

Offensive guard Mike Iupati had a scare late in the third quarter when linebacker Thomas Davis rolled into his knee. Iupati fell to the ground favoring his lower left leg as teammate Jonathan Goodwin waved for the team doctors. After shaking it off on the sideline, Iupati returned and finished the rest of the game.

The most troubling injury of the day was to safety Eric Reid who got walloped trying to make a tackle on running back Mike Tolbert. Reid lowered his head and turned away looking to make a shoulder block on the diving Tolbert, but the crown of Tolbert's helmet struck the side of Reid's head anyway.

The momentum of the collision sent Reid spinning before he crashed onto the ground almost motionless. Players from both teams dropped to a knee and the crowd fell silent.

"Eric [Reid] has been playing some amazing football for us. I'll pray that he does the right thing and take the kind of time you need." - Patrick Willis

"Eric has been playing some amazing football for us. To see him go down today, it's unfortunate and I pray that he'll be okay," said team captain Patrick Willis. "I'll also pray that he does the right thing and take the kind of time you need. I think this is his second time going down like that."

That is precisely right. Reid suffered his first concussion against the Seattle Seahawks in Week 2 and was back on the field a week later.

"At the end of the day," Willis concluded, "it's about your health."

Concussions are a frightening thing and even more so considering we still have much to learn about them. By no means am I any sort of medical professional nor am I fit to make any sort of medical evaluation. But there is plenty of research that proves the dangers of successive concussions.

Reid is having a phenomenal rookie year. Just halfway in, he has already shattered all of my expectations. But as much as I enjoy watching him play, his long-term health should be taken into consideration. Let's hope the team doctors facilitate a speedy and, most importantly, safe recovery. 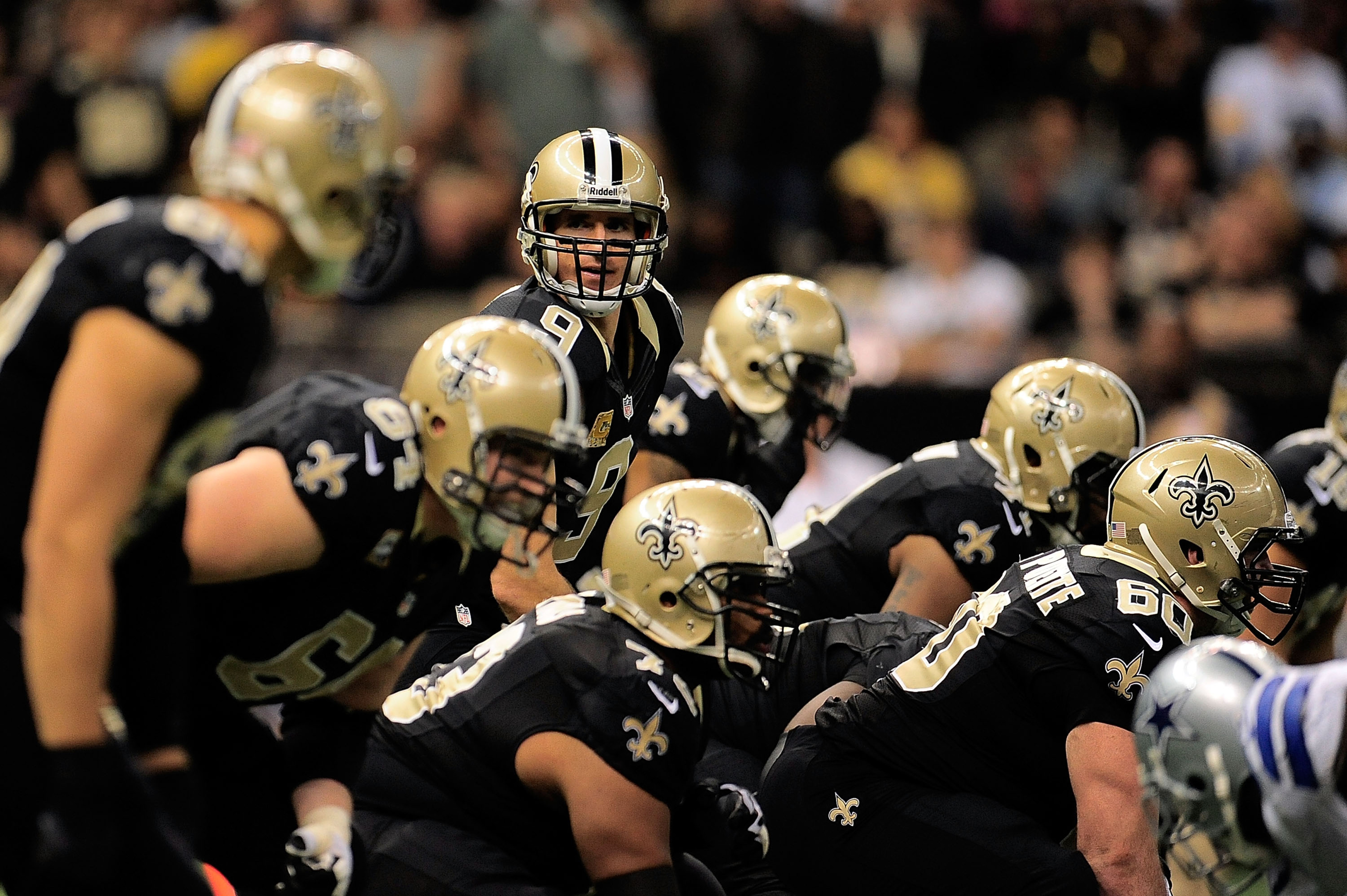 There is a house in New Orleans...

That's right...40 first downs. Against Carolina, the Niners ran 52 total plays. Something tells me nine first downs just isn't going to cut it in the Mercedez-Benz Superdome. The Saints also dropped 625 total offensive yards against the Cowboys, the highest yardage total in a non-overtime game since 1982.

It would be very easy and mostly justifiable to point at the offense as the reason for the loss against Carolina. Patrick Willis offered a more diplomatic explanation.

"I know the offense today was not happy with their performance, but there's going to be times like that," he reasons. "Today, I just wish we were able to do a little bit more on defense, maybe score on defense, or something. I don't like pointing fingers.