49ers running back Anthony Dixon voiced some frustration following the 49ers loss to the Saints. We take a look at his tweets.

Share All sharing options for: Anthony Dixon isn't pleased with his touches

I don't even know where to begin with this. Anthony Dixon sent out this string of tweets last night after the 49ers 23-20 loss to the New Orleans Saints. 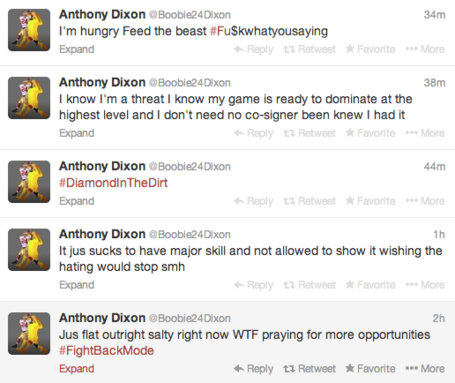 Initially there was some thought that he was complaining about the offensive performance in general. It became a little more about him when he mentioned that he knows he's a threat.

At this point, I'm not overly concerned about Boobie getting pissy about not getting touches. The 49ers have a lot of issues to figure out on the offensive side of the ball. Hearing players get riled up doesn't really help matters, but I look at it as just letting off steam. We've heard plenty of rabble-rousing when LaMichael James says something on Twitter, and really when anybody says something a little salty on Twitter.

We don't want to see the team develop any sort of dysfunction, but I also view Twitter as a chance to blow off steam. That being said, there are certainly some question marks to be raised about how the run game is being used in a broader sense. I don't know that Anthony Dixon is the answer to what ails this offense, but the lack of a cohesive rushing attack on Sunday didn't help matters.