The 49ers made a pair of poor replay challenges in their Week 11 loss to the Saints. We take a look at Harbaugh's reasoning.

After Sunday's loss to the New Orleans Saints, San Francisco 49ers head coach Jim Harbaugh met with the media to discuss all that went down. It should surprise nobody that he was asked about his use of two challenges in the first half.

The 49ers picked two plays that upon review seemed fairly obvious to be correct calls. The first play was when Drew Brees threw a pass as he approached the line of scrimmage. The second play was when Jon Baldwin caught a ball in the end zone, and then fell out of bounds where he lost control of the ball.

Coach Harbaugh indicated he spoke with Eric Mangini about the challenges. This is actually the first really specific role we've heard with regard to the 49ers "senior offensive consultant". In this case, Harbaugh said he talked with him regarding both calls. Harbaugh mentioned this around the 3:15 mark of his post-game press conference.

In discussing both plays, there seemed to be a bit of confusion. Harbaugh said they did not have a video review before throwing the challenge flag. On the second play, Harbaugh said there was a question as to whether the ball was bobbled and decided to challenge it. 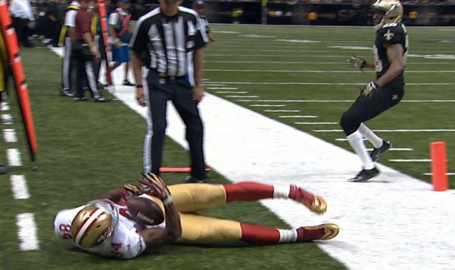 I don't know what kind of review they had to look at it, but this ball is loose. The Calvin Johnson rule regarding going to the ground strikes me as a bad rule, but it is the rule. Baldwin had to maintain possession going to the ground, and he did not.

The "Captain Hindsight" problem with the first challenge is they would probably have been more likely to challenge the spot on Jimmy Graham's subsequent two-yard catch for a first down on 3rd and 2. New Orleans might very well have gone for it, but that was a bad spot.

While hindsight is 20/20, this still goes to the issue of challenges. Sometimes it seems like Coach Harbaugh (or the people telling him to challenge) lacks a certain measure of discipline on challenges. He has successfully challenged plays, but he has also had moments like this where we're all wondering what the brain trust is thinking.