What really made the difference vs. the Saints on Sunday?

The 49ers dropped a close one to the New Orleans Saints. We take a look at some of the key plays from the game.

Share All sharing options for: What really made the difference vs. the Saints on Sunday?

The San Francisco 49ers lost a heart-breaker on Sunday, as the New Orleans Saints booted a late field goal to take home the 23-20 victory. We've spent the last three days complaining about the Ahmad Brooks personal foul, and it's not exactly shocking given the strip-sack that could have been. The 49ers were not guaranteed a win with that potential fumble recovery, but with 3:18 to go, the 49ers chances of winning would have increased quite a bit.

We're doing a sponsored post this week looking at some of the key plays from Sunday's game. I thought this was as good a time as any to remove the Brooks play from the situation. I'll still include some plays with hypothetical results, if only because we haven't talked about what happened. But there were plenty of other plays that flipped this game. The first three are negative plays, and the final two are positive plays that kept the 49ers in the game. Feel free to mention other plays. 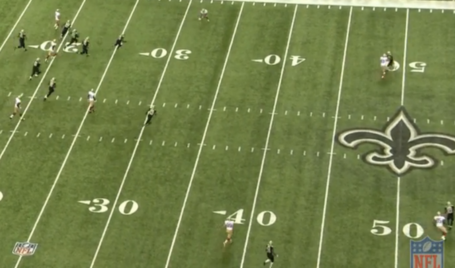 As you can see here, Frank Gore (top center of the picture), has a whole lot of space in front of him. We see one defender on the top right, but the 49ers receiver could block him in a multitude of ways. Gore could have cut back inside, or stayed outside. I don't know that Gore scores on the play, but he gets the 49ers out to midfield.

This was a poor mistake by Osgood, but given his special teams' performances most of the season, it's hard to get too angry. It was a bone-headed mistake, but as with much of this game, the loss can't be pinned on just him. Sproles made the fair catch a bit early, and it appears Osgood was still attempting to track the ball. He did not see the fair catch, and so he went for the tackle. The play moved the Saints from their 25 to their 40. Given how quickly this offense can move the ball, it wasn't going to make life easier.

3. Colin Kaepernick scrambles out of bounds with less than two minutes left

On 3rd and 19, Kap scrambled to his left, and picked up 16 yards. Unfortunately, he was tackled out of bounds, stopping the clock and letting the Saints save their final timeout. We don't know how any of this would have played out had he stayed in bounds, but much like the Osgood penalty, it was a bone-headed mistake that made things a little bit easier for the Saints. After the game, Kap said he thought he could hit the edge and get to the first down marker. I do appreciate the aggressiveness, but this was a situation where it was key to consider the play-clock situation.

4. Colin Kaepernick runs down Corey White, leading to fumble out of the end zone

The 49ers did not pull out the victory on Sunday, but this play was critical in keeping the 49ers in a fairly tight game. We talk about the unfairness of some blown calls, but the 49ers benefited here. White picked off the pass, ran back toward the end zone, and then fumbled the ball a couple yards short. The ball went out of the end zone, which meant the 49ers took over from their own 20 on the touchback.

On this play, there was a question of if White was initially down by contact right after the pick. The call on the field was that he was not. On the replay, it does look like he hits the defender, but because the review is from behind the play, you can't see if he has possession of the ball when the contact happens. I think you could make arguments he did and did not have possession, but since the play had been ruled NOT down by contact, there simply was not clear and convincing evidence to overturn it.

This drive and the next drive (involving the White interception/touchback) were two of the biggest reasons the 49ers were able to hang in this game. Well, aside from the dynamic effort of the defense. On this drive, the 49ers picked up a pair of first downs before stalling at midfield. Andy Lee punted from the Saints 48-yard line and Moore waved for the fair catch. He was muffed the punt, and Ventrone was all over it. Two plays later, Kap connected with Anquan Boldin for the 49ers first score of the game.

Test how precise your football knowledge is by playing the Precision Play of The Week for a chance to win Super Bowl tickets – brought to you by Gillette Fusion ProGlide, precision comfort, even on sensitive skin.