Share All sharing options for: All-22 Breakdown of how the Saints stuffed the 49ers run game

With a stated goal to establish the run, the 49ers have faced more than their fair share of 8-man fronts this year. On Sunday, the trend continued as Rob Ryan routinely packed the box and instructed his safeties to fly forwards in an effort to take away the leagues 2nd ranked rushing attack. And it was effective; outside of Frank Gore’s 24 yard scamper and Kaepernick’s 3 scrambles, the 49ers rushing attack was limited to 18 rushes for 32 yards, an average of 1.7 yards per carry.

Without the stabilizing effect of the run game , the whole 49ers offense struggled and their only 2 touchdowns came off Saints turnovers. When forced to drive the length of the field, Colin Kaepernick and Co. were unable to string together enough plays to create scoring chances due to the consistent inability to gain positive yardage on the ground. The most worrying trend is how the 49ers have struggled against the last four quality defenses, Seattle, Indy, Carolina and New Orleans, because of their one dimensional offense.

Let’s look at how the Saints consistently outnumbered the 49ers at the point of attack by packing the box and disregarding the threat of the pass. 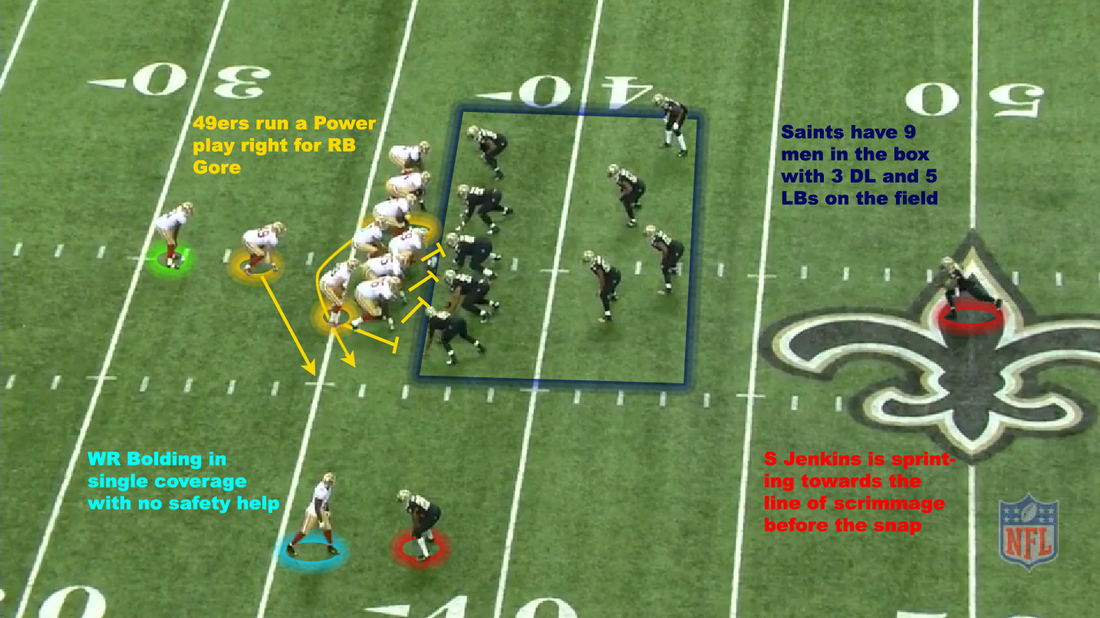 Pre-Snap: The Saints have their big personnel, replacing a S a LB, on the field expecting a run. Additionally, S Jenkins begins sprinting towards the line of scrimmage before the snap; acting as a 10th defender to stop the run and leaving WR Boldin matched up one on one on the outside. 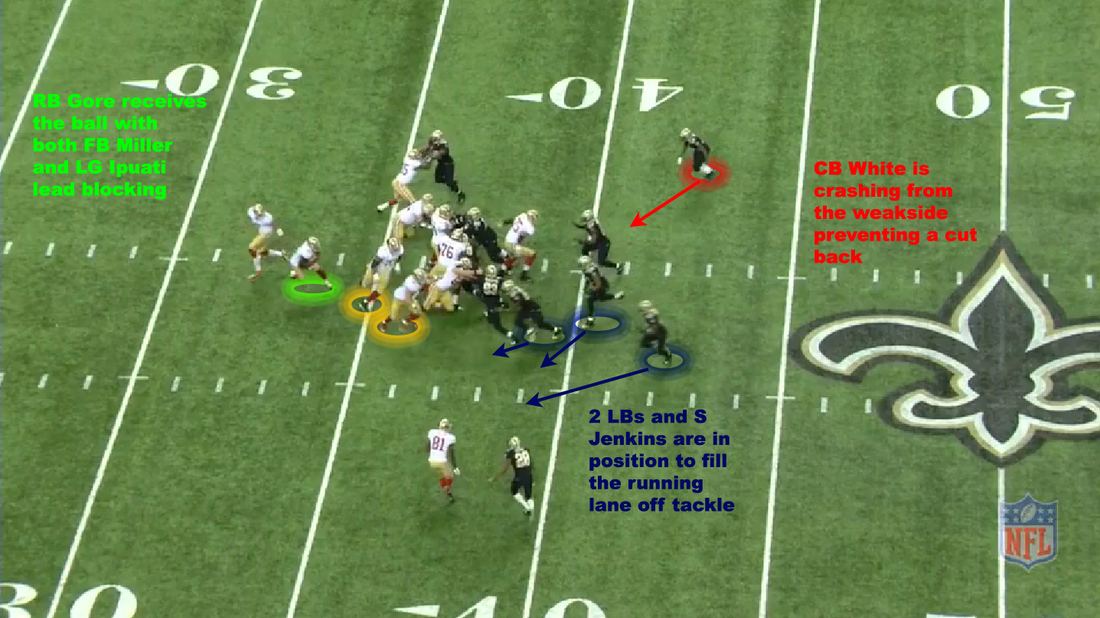 Post-Snap: The right side of 49ers offensive line blocks downs and LG Iupati pulls on the power blocking scheme. Expecting a run and tipped by the pulling guard, the Saints LBs and S Jenkins crash the right end of the line, giving them a 3 to 2 numerical advantage at the point of attack. 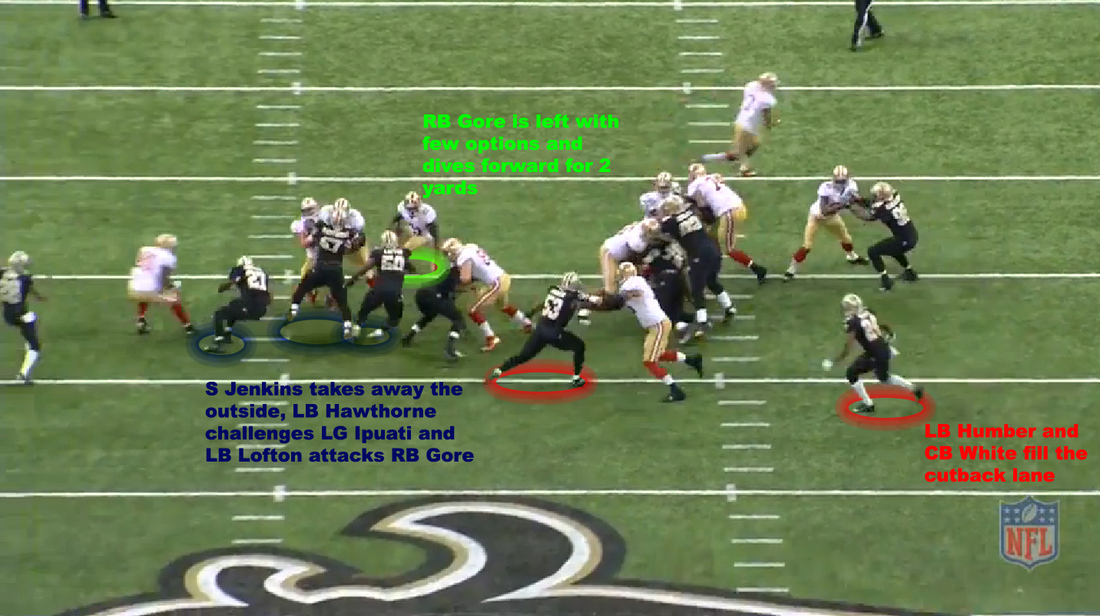 As RB Gore gets to the line of scrimmage, every running lane is filled by a Saints defender; S Jenkins cuts off the outside, LB Hawthorne occupies LG Iupati and FB Miller, LB Humber and CB White close off cut back lane and LB Lofton attacks downfield forcing RB Gore to make a decision.

With no viable options play side, RB Gore simply lunges into the cut back lane as CB White arrives for a 2 yard gain.

Summary: Seeing how early and hard Jenkins, who was the lone safety on the play, came forward gives a sense of the Saints determination to stop the 49ers run game at all costs. Rob Ryan’s strategy was successful as the 49ers were unable to account for all of the defenders forcing RB Gore to settle for a short gain.

While most of the action happened between the hash marks, the real key to this play was the single press coverage on the outside on Boldin. No safety, no off coverage to take away the deep pass, just simple one on one press coverage. I realize that Boldin cannot consistently get separation in this stage of his career but the 49ers must attack this match up to keep the defense honest.

Let’s look at how the 49ers refusal to test the Man 0 coverage allowed the Saints to pack the box and take away Frank Gore. 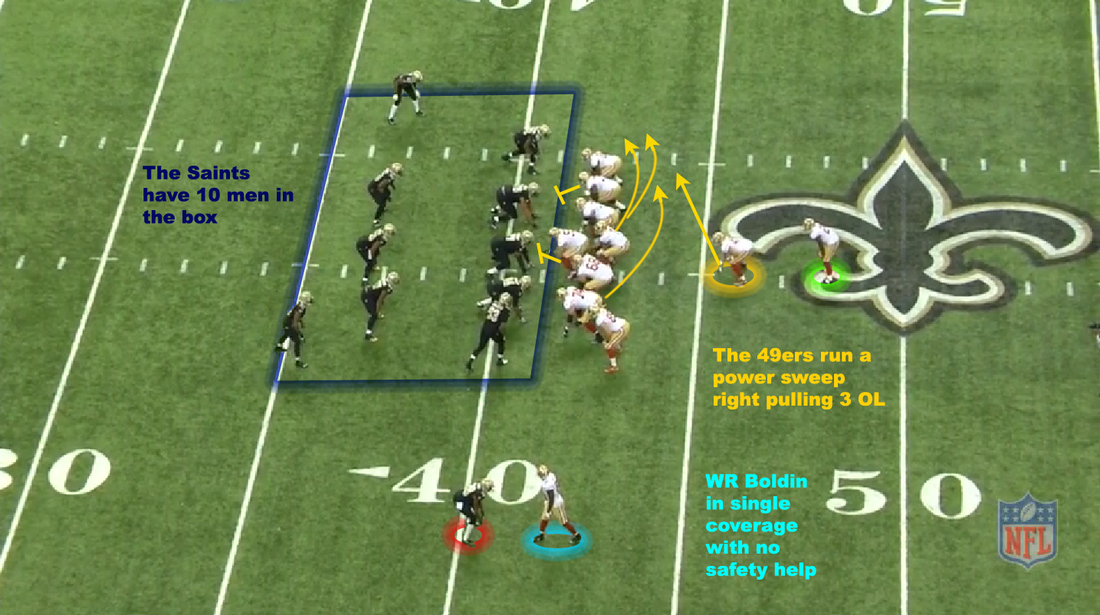 Pre-Snap: The Saints walk S Jenkins into the box giving them a 10 man front and again giving WR Boldin single coverage on the outside. 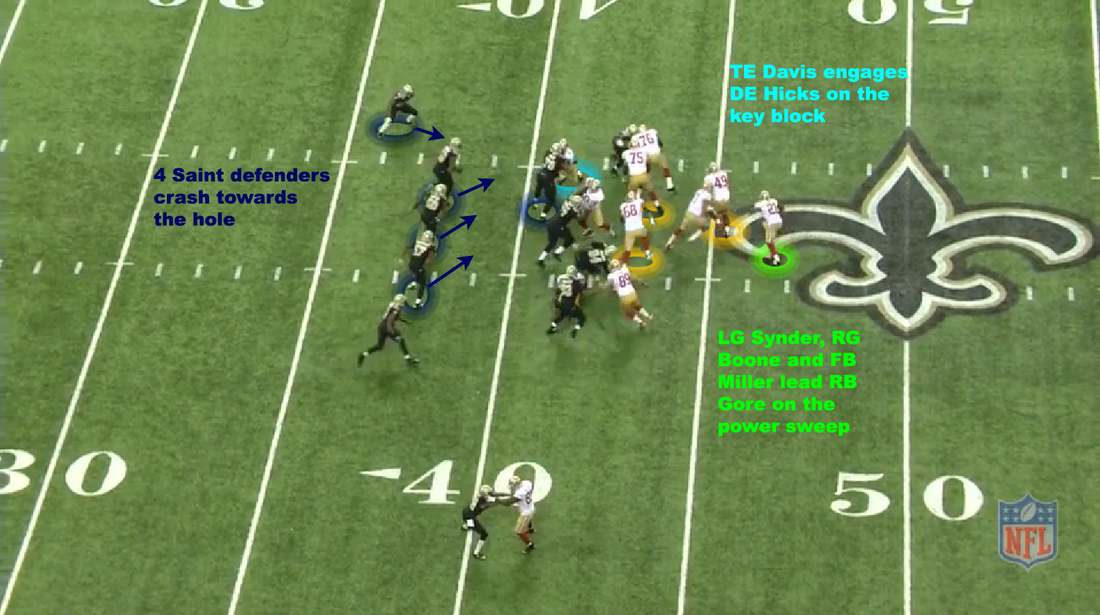 Post-Snap: At the snap, TE Davis blocks down on DE Hicks and RT Davis, RG Boone and LG Snyder pull on the power sweep right. With RT Davis kicking LB Haralson out, RB Gore has 3 lead blockers off the right end of the line. Unfortunately for the 49ers, the Saints have four defenders in position, again outnumbering the 49ers at the point of attack. 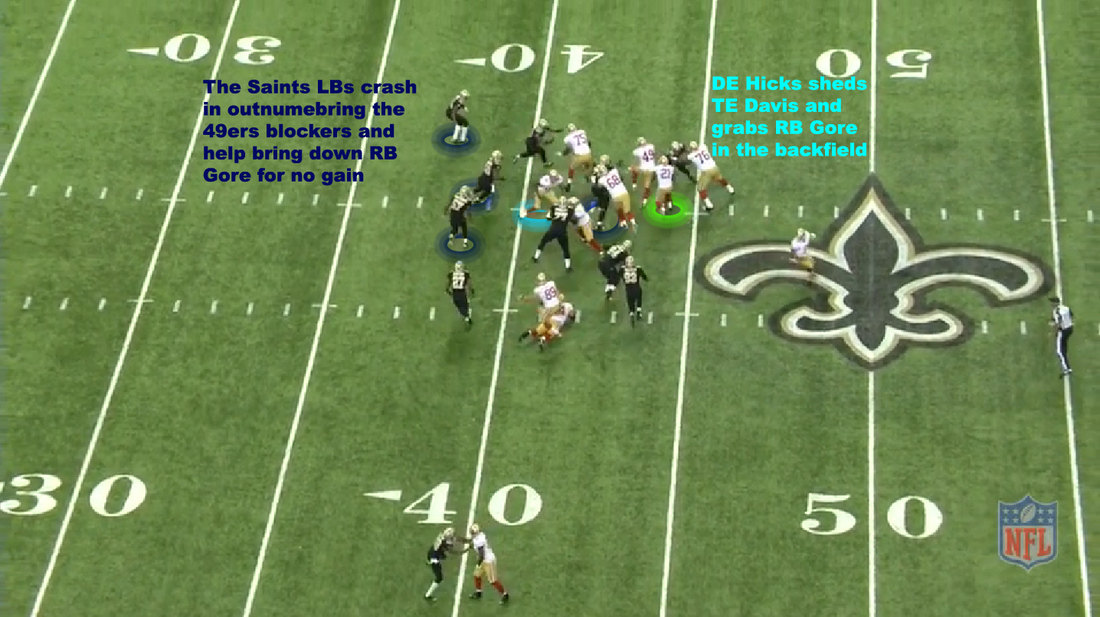 While the unblocked LB was in position to stop RB Gore for a short gain, DE Hicks blows up the play by disposing of TE Davis and grabbing RB Gore in the backfield for no gain.

Summary: Even without a nice play by DE Hicks, the sheer numbers of Saints in the box doomed this power sweep. Not only were they aligned in a position to attack the run, they were cheating forward at the snap ready to fly downhill towards the ball carrier, showing little respect for any play action pass.

Similar to the first play, Rob Ryan dared the 49ers to attack the single man coverage on the outside. By this point in the game, late in the 3rd quarter, there is no excuse for not adjusting to the defense and attempting to create a big play with either play action or a simple fade/back shoulder throw, something the 49ers reluctantly did only twice despite being shown this defensive scheme all day.

While I love the ground and pound game as much as anyone, well coached teams in the NFL can and will take away your first option forcing you into your weakness. In the 49ers case, their inability to beat one on one coverage outside hamstrings not only their pass game but their rushing attack.

The most frustrating part of the 49ers offensive woes is the lack of attempts to take advantage of the single coverage outside. I personally would have preferred to see Kaepernick throw to Anquan Boldin every time the Saints disregarded the pass so blatantly even if the results were mixed. Yes this would have placed the burden of the offensive on the struggling Kaepernick, but you have to be able to take what the defense gives you in the NFL particularly went your attempts to attack a defense's strength are netting an average of 1.7 yards per attempt.

Every week the offensive issues seem to boil down to the same thing, the loss of a true receiving in Michael Crabtree. Due to the timing of the injury, weeks after the draft, the 49ers were in a difficult position to mitigate the loss. Given the options of staying put and counting on Boldin and others until a semi healthy Crabtree returns or mortgaging the future by overpaying for Josh Gordon or Hakeem Nicks, Baalke did the right thing and stood pat. It was a wise decision because the NFL has such parody due to the single elimination playoff format so positioning yourself to be a viable threat over multiple years is a better move compared to putting all of your chips in for a single attempt.

That being said, the 49ers offenses is extremely frustrating to watch especially after last years breakout performance had expectations sky high, so high that Kaepernick was the co-favorite for MVP in Vegas. A mere 11 weeks later, 49ers fans must realize their hopes lay with an injury prone wide receiver coming off an Achilles tear and readjust their goals from winning the Super Bowl to making the playoffs, illustrating how quickly fortunes can change in the NFL.