"One team is going to emerge when it's all said and done. It's going to be us."

Welcome back to The Booth Review. On Monday night, the San Francisco 49ers captured a decisive victory against Washington and, for now, own the final seed of the playoffs. What did we learn?

We've all grown accustomed to the postgame locker room speeches by now. It's become a staple ritual, a signature of the Jim Harbaugh regime in San Francisco. There's the ra-ra talk of 'mighty men'...the distribution of the game ball honoring the day's most valiant performance...and lately, there's been the jovial practice of slapping hands. Then, of course, everything is tied together by the rousing battle-cry we've all come to learn and love.

But there was something different about the speech following Monday night's victory in the nation's capital. A seemingly cathartic honesty that revealed not just one but several truths.

"Always great to come into a winning locker room. Nothing makes you feel like this but winning," Harbaugh proclaims, arms raised high above his head. "Winning isn't everything, but it's the only thing that will make you feel like this."

It was all standard fare. And then... 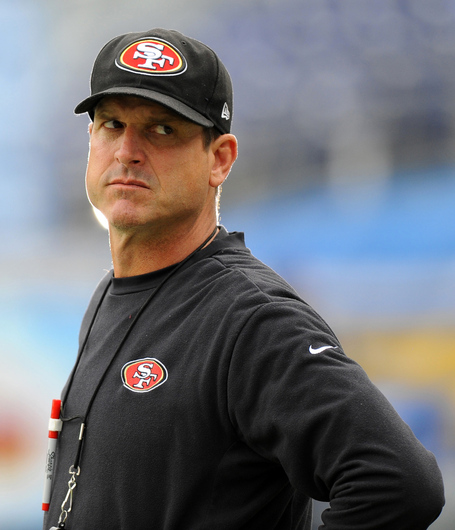 "We got a lot of tough ball games just like this ahead of us," he says, projecting his voice as a pastor would a sermon to his congregation. His inflection turns dire just for a moment. "What's in store, from here on out, is tough, alright?"

His players nod in affirmation.

"It's going to be us," Harbaugh declares. "We're going to make it us."

And finally, the refrain: "Who's got it better than us?!"

Well, at the moment, quite a few. In fact, heading into Monday night, San Francisco had been leapfrogged by the division rival Arizona Cardinals for the last playoff seed in the NFC. The Niners had fallen out of the playoff picture altogether albeit for a few brief moments.

To reclaim their position, a win was absolutely crucial. Anything less going forward would almost certainly spell elimination. Such are the circumstances in San Francisco these days. These are desperate times. 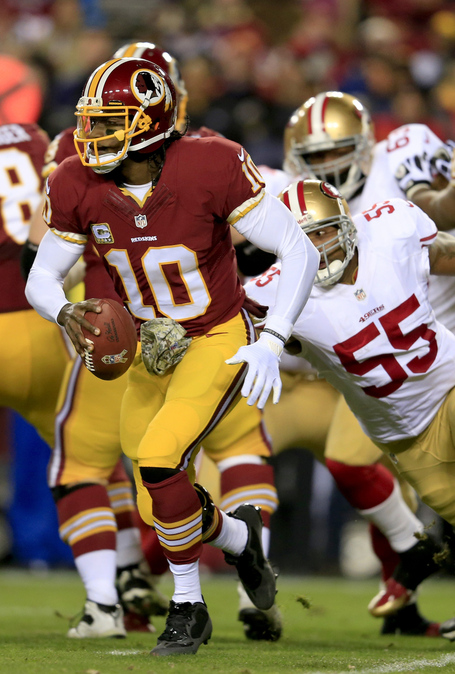 In the week leading up to the game, most of the media attention, as expected, emphasized the recent struggles of both teams' signal callers. But it would be one team's defense that stole the show.

San Francisco saw spectacular linebacker play across the board. When Alfred Morris or Roy Helu siphoned to either side of the field, they were no match for the speed of Patrick Willis and NaVorro Bowman, who tracked them down like homing missiles. The due combined for 20 total tackles.

Then there was the pass rush, courtesy of Ahmad Brooks and Aldon Smith, that made Robert Griffin III miserable all night.

From the start, Brooks was an absolute force, his presence felt in the backfield. He recorded a pair of sacks which bumps his season total to 8.5, both a team and career-best.

One of his most impressive plays came at the end of the first quarter when RGIII was flushed out of the pocket and scrambled left up-field. Brooks was hot in pursuit the entire way before shoving Griffin out of bounds which should have forced the fourth down punt, if you ask me. Instead, Washington received a fresh set of downs by a hair.

"Those guys are two of the best outside linebackers in the league." - Patrick Willis, on Ahmad Brooks and Aldon Smith

Smith, who notched a pair of sacks himself, came barreling down on Griffin, forcing an errant ball right into the arms of Donte Whitner for the easy interception.

"Those guys are two of the best outside linebackers in the league," Willis said of his bookends. "They really understand what makes our defense run, and they know how to get to the quarterback. They do it well."

RGIII was held to just 90 net passing yards all night and Washington could only produce two field goals in the second quarter. That was it. 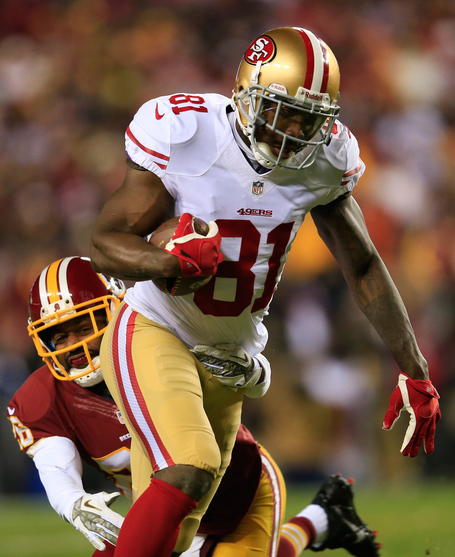 Let's get this out of the way: I know it was against Washington, the 7th-worst pass defense and 5th-worst overall defense in the league. They're pretty lousy, plain and simple. But there's a certain level of appreciation for doing what you're supposed to, and that's exactly what San Francisco did. They took care of business.

So while we shouldn't get entirely carried away, it's okay to be at least a little encouraged by some of the things that we saw on Monday night.

First, the return of the big play.

Halfway through the first quarter, Colin Kaepernick uncorked a beauty down-field for Anquan Boldin who snatched it out of the air away from a flailing Josh Wilson. A gain of 24 yards.

On the very next play, Kap connected to Boldin once more but on the opposite end of the field, a 19-yard strike into the end zone for the score.

We all know what Boldin can do. That he finished the day with 94 receiving yards and two touchdowns is not at all surprising.

The big question in San Francisco all season has been whether or not someone can step up behind him. With the return of Mario Manningham, we are starting to see the potential taking shape.

It seems so obvious, but this is why it is paramount to have multiple legitimate receivers.

Before Manningham returned to action, there was no one behind Boldin that opposing defenses were even remotely concerned about. Kyle Williams fumbled away his opportunity to shine and has since been waived. Quinton Patton's preseason promise never materialized due to a foot injury. And Kassim Osgood is viewed almost exclusively as a special teams player.

I don't believe Manningham has completely returned to form just yet, but even at less than 100%, he brings legitimacy to San Francisco's receiving corps. That legitimacy grows even stronger with the likely return of Michael Crabtree this Sunday against the St. Louis Rams.

"It gives us some depth," Boldin said on Monday night. "It gives us another playmaker outside. It's another added dimension that we need. We've seen ‘Crab' make plays over the years, and we expect nothing less of him."

If you still needed something to be thankful for this weekend, I just gave you three.