All-22 Breakdown of the 49ers Growth in the Passing Game

An in-depth breakdown using All-22 footage of how the 49ers finally attack the 8 man fronts with vertical passes and what this means for the 49ers offense down the stretch.

Share All sharing options for: All-22 Breakdown of the 49ers Growth in the Passing Game

Coming into Monday's showdown against Washington, the 49ers offense had seemingly been exposed as one dimensional. Both the Saints and Panthers had stacked the box and played single coverage on the outside taking away the 49er potent running game and forcing Colin Kaepernick to throw. It proved a smart tactic as the 49ers averaged 80 yards passing against the Saints and Pathers and struggled to move the chains.

Luckily for Greg Roman, his offense was going against Washington and their 27th ranked passing defense. With multiple rookies starting and only one proven veteran in DeAngelo Hall in the secondary, Washington's pass defense has been target and abused all season long.

Despite knowing how poor their cornerbacks and safeties have been playing, Washington adopted the Saints' strategy to defend the 49ers by stacking the box and challenging the 49ers passing game. While this scheme limited Frank Gore to 31 yards, the 49ers were able to beat Washington by being aggressive and attacking the favorable match ups on the outside.

Let's look at how the 49ers toke advantage of Washington's focus on defending the run with vertical routes. 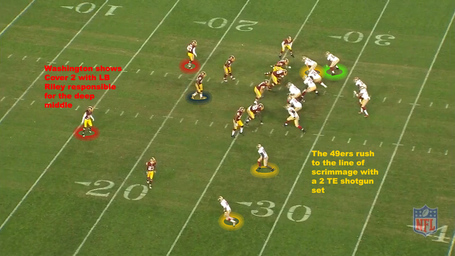 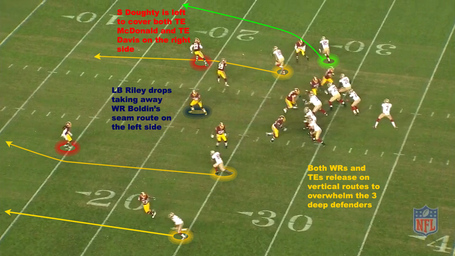 Post-Snap: All of the 49ers receiving options, TEs McDonald and Davis and WRs Boldin and Manningham, release on vertical routes forming a 4 vertical passing scheme. With only 3 deep defenders, each S with a deep half zone and LB Riley with the deep middle zone, Washington is outnumbered deep and one of the vertically routes will become open. 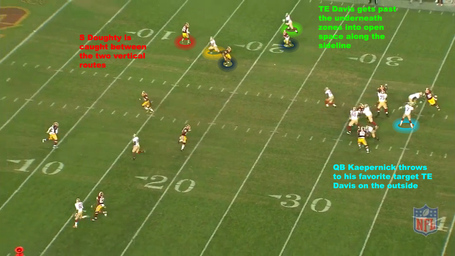 With LB Riley dropping to take away WR Boldin's seam route on the left side, S Doughtey is left to cover both TE McDonald seam route and TE Davis's go route on the right side. Although TE McDonald's seam route was a better option, QB Kaepernick is focused on his favorite target, TE Davis and decides fire down the sideline. 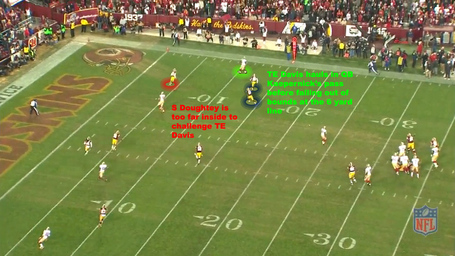 The throw sails over the heads of the underneath zones and is placed too far outside of S Doughtey allowing TE Davis to haul in the pass uncontested before stepping out of bounds at the 6 yard line.

Summary: After failing to challenge the Panthers and Saints' 8 and 9 man fronts with the pass, the 49ers repeatedly attacked Washington down the field Monday Night. This simple 4 verticals route combination highlights how the 49ers can and should continue to take advantage of defenses overloading the box to take away Frank Gore and the run game.

On the play itself, Kaepernick shows his reliance on Vernon Davis by overlooking a wide open TE McDonald down the seam. Now I certainly don't know his reads, I also don't want a Trent Dilfer-Colin Kaepernick confrontation, but the typical read for 4 verticals is to move the safety, or in this case the middle linebacker, one way with your eyes before switching to the opposite seam route as its an easy throw down the middle of the field.

Regardless of who Kaepernick should have thrown the football too, the 49ers offense was willing to throw down the field against an 8 man front, something that was missing in the past 2 weeks.

Let's look at how the 49ers not only attacked the opportunities presented to them but created favorable match ups for their playmakers with motion. 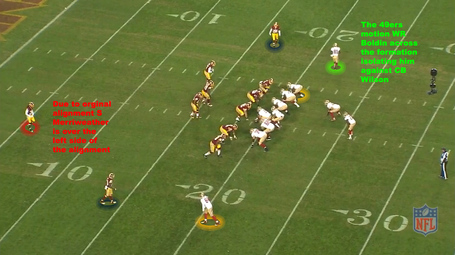 Pre-Snap: The 49ers come to the line of scrimmage with both WRs Manningham and Bolding split out wide left of the formation. Washington responds by placing S Meriweather over the top of both receivers in a deep zone with CB Hall underneath.

To create a one on one match up, the 49ers motion WR Boldin across the formation and force CB Wilson into single coverage on the outside. 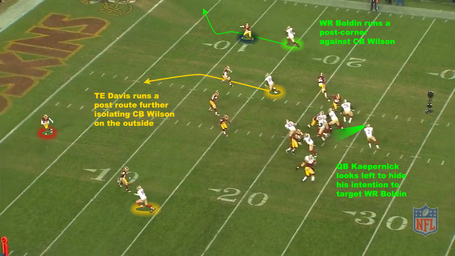 Post-Snap: As Kaepernick drops back in the pocket he looks left to hide his intention to target WR Boldin's post corner route on the right side. Additionally, TE Davis runs a post route down the middle occupying the middle zones defenders. 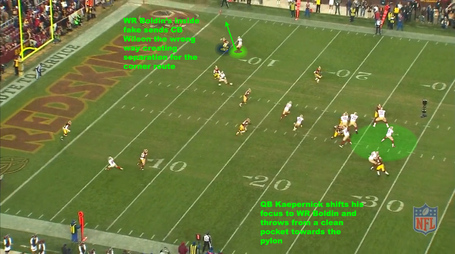 With a clean pocket to throw from QB Kaepernick shifts his focus to WR Boldin, who has turned CB Wilson around with a nice post corner route. QB Kaepernick releases a dart that finds WR Boldin at the pylon for a touchdown before CB Wilson can challenge the catch.

Summary: Again, this is exactly what 49ers fans have being looking for from Kaepernick and the 49er offense. When faced with an 8 man box and a single safety, Greg Roman created a one on one match up with motion and attacked it with a single read play that Kaepernick can excel at.

While Kaepernick showed his ability to manipulate the safety with his eyes, although it was unnecessary on this play due to the coverage, his dependence on Boldin and Davis is somewhat alarming. They represent all of his 15 touchdown passes and he seems to lock onto them telegraphing his passes and giving the defense opportunities to make plays.

Let's look at how Kaepernick's reliance on Davis and Boldin almost cost the 49ers big time with an ill advised throw into double coverage. 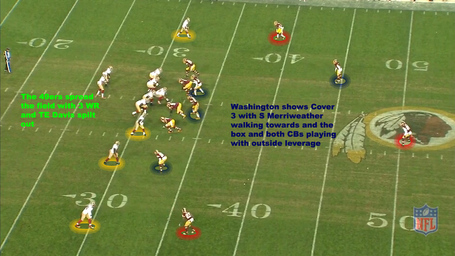 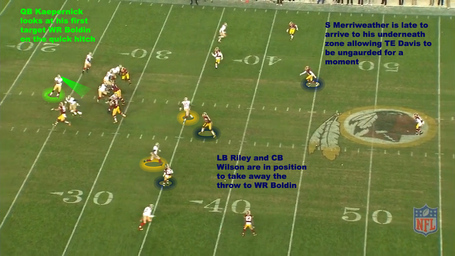 Post-Snap: As his first read, QB Kaepernick is focusing on WR Boldin on the 7 yard hitch keying the underneath zones of LB Riley and CB Wilson to squeeze in to take away the throw. This action along with S Meriweather arriving late in his underneath zone allows TE Davis to be wide open across the middle initially. 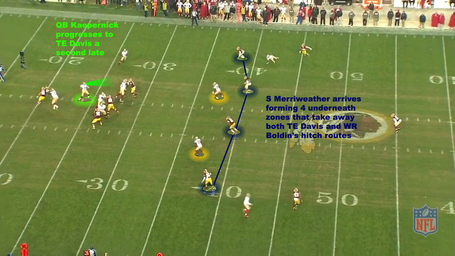 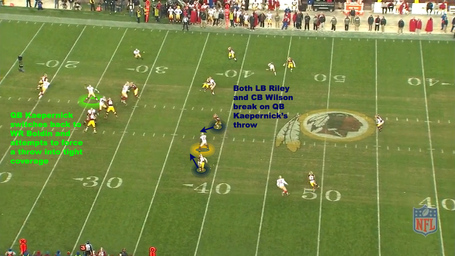 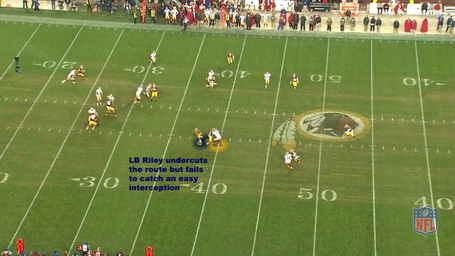 Both LB Riley and CB Wilson successfully undercut the late throw with LB Riley getting a golden opportunity for an interception. Luckily for QB Kaepernick, LB Riley muffs the catch and drops what would have been an easy pick six.

Summary: Everyone that has watched the 2013 49ers can tell the game still moves slightly too fast for Kaepernick. He demonstrates the pre-snap knowledge, deciding which of the 3 plays called in the huddle to go with, and the physical abilities to be an elite quarterback, but is still overwhelmed by the speed of the NFL.

This deficiency becomes most evident when he is forced to read defenses and toggle through his receivers under pressure. Now its one of the more difficult aspects of quarterbacking and Kaepernick is still adjusting from a spread offense in college, but its required for sustained success in the NFL.

His inability to consistently progress through his read leads to his tendency to stare down his intended receiver. This becomes a real liability when faced with zone defenses that allows defenders to read the quarterback, as Washington did on this play. When his first read was taken away, Kaepernick struggled to quickly progress to his second read, missing an opportunity. Further more he nearly cost the 49ers dearly with an off balance telegraphed throw into double coverage.

Overall, Monday's game was a step in the right direction but far from the required level of offensive execution to be a factor in January. Yes, the 49ers were willing and able to take advantage of a defense aligned to stop the run, but again Kaepernick's limitations were obvious despite playing one of the worst defenses in the league.

Whether Monday's success throwing the football was a result of playing an over matched opponent or actual growth will be answered thoroughly over the last 5 games of the regular season. Games against Seattle, Arizona, Tampa Bay and the Rams this week will give a good sense of where the 49ers offense stands. Add in Michael Crabtree, who is expected to play Sunday, and the 49ers finally have a full compliment of weapons for Kaepernick to use. While the additional firepower will be welcome, the 49ers no longer have any excuses for not producing and must show that last years offenses outbreak was not a gimmick.