The Booth Review - 49ers vs. Seahawks

"I think it was a statement game to the world."

Welcome back to The Booth Review. On Sunday, the San Francisco 49ers bested the division-leading Seattle Seahawks by a score of 19-17. What did we learn?

San Francisco's star linebacker Patrick Willis has always been a soft-spoken, silent leader. Unlike some of the more vociferous Ray Lewis types of his position, he has chosen to, instead, let his viciously efficient play on the field do most of the talking.

So I'm admittedly taken aback when I see Willis, encircled by fellow teammates, delivering a speech before Sunday's game against Seattle. That much wasn't bizarre; he has done this many times before. But on this day, in this game, against this foe, he definitely looked and sounded like a Ray Lewis.

"Aye, we're supposed to be the big bad dogs! Let's show it today!" he barks out. "Let's sell out! Let's sell out for every man next to you!" 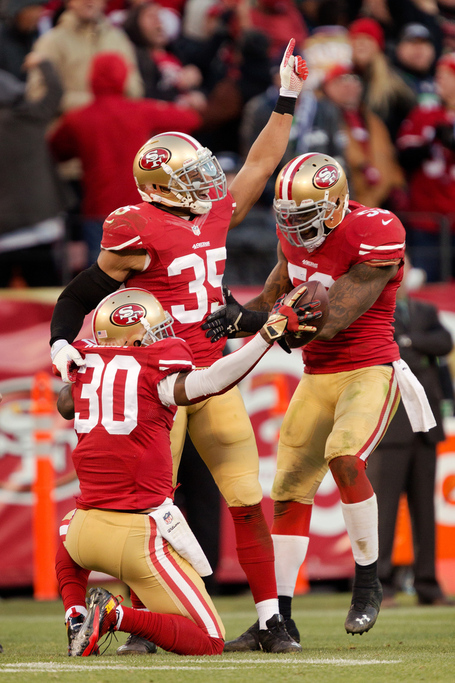 In terms of standing, I'm not sure this game meant very much for either team. Seattle held (and still holds) a comfortable lead for the division crown, and with just three games left in the season, it almost seems a foregone conclusion that it will be theirs by the end of the year.

San Francisco, apparently destined for the wild card, wasn't playing for standing but rather for statements:

The Seattle Seahawks are not invincible.

The San Francisco 49ers are still the team to beat.

"You guys kind of counted us out already," NaVorro Bowman said of the media. "I think it was a statement game to the world. As you guys know, this is still our division. Until a team takes that from us, we will continue to rep this division the right way."

It's very easy to look at a one-loss team in December and presume they will represent their conference in the Super Bowl. And let's be real, that's how most members of the national media have grown to perceive the Seahawks who, in less than a season, have leapfrogged the Niners as the darlings of the NFC.

But they can be beaten. If not to prove to everyone else outside of the locker room, it was to reaffirm this fact within themselves.

"They might have a better record than us," said Donte Whitner, "But when playoff time comes, you have to look out for the 49ers." 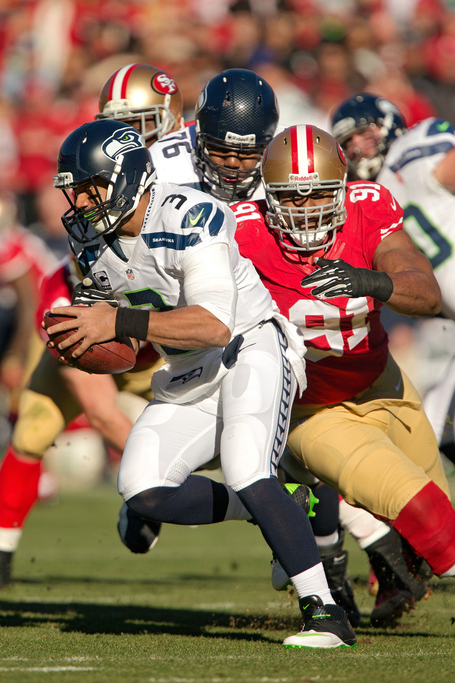 San Francisco's front-seven were the stars on Sunday. They generated consistent pressure the entire game and were quite a force in the backfield.

Seattle is fortunate to have such a mobile quarterback, because he was doing plenty of running all day.

Their first drive of the game came to a screeching halt once NaVorro Bowman crashed into Wilson to jar the ball from his grip. While San Francisco didn't recover the fumble, they did force Seattle to punt after just four plays into their opening drive.

"If he wasn't ready," said Bowman, "I think he got ready after that."

On their second drive of the game, the Seahawks faced 3rd-and-7. Wilson received the ball out of a shotgun formation, and in the blink of an eye, the pocket had all but collapsed, leaving him nowhere to go. Justin Smith lassoed Wilson around his ankles, and as he fell, Aldon Smith came crashing down on top of him.

Seattle's third offensive drive ended with similarly disastrous results. Defensive coordinator Vic Fangio dialed in a beautifully-executed stunt that had Ray McDonald running across the formation, behind Justin Smith and Aldon Smith, to Wilson's blindside and wrapping him up around the waist for the sack.

"The focus was on Russell Wilson," admitted Bowman. "To keep him in the cage and to stay in coverage. I think we did that today." 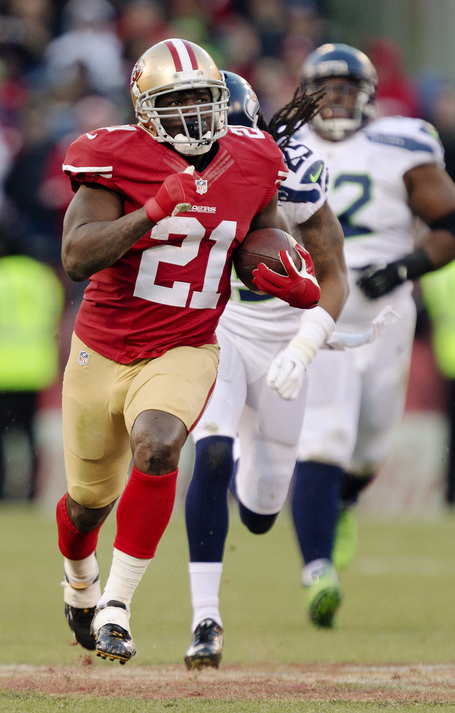 OFF TO THE RACES

To the credit of both defenses, there wasn't much going on in the way of breakaway offensive plays. Russell Wilson found tight end Luke Willson on a 39-yard touchdown strike in the second quarter (with the help of an abysmally-bad angle by Carlos Rogers). Aside from that, it was more cents than dollars.

Fortunately for San Francisco, their big play came at just the right time.

With a little over six minutes left in the fourth quarter, Seattle took the 17-16 lead with a Steven Hauschka field goal. San Francisco had the two-fold task of eating up as much clock as possible while positioning themselves for the winning score.

You see, Marshawn Lynch might have somewhat of a reputation as a 'Niner Killer', but a guy named Frank Gore has been killing the Seahawks since 2006.

On 1st-and-10, at San Francisco's own 31-yard line, Gore took the handoff and followed fullback Bruce Miller through the left side of the line before cutting up-field right between Earl Thomas and Richard Sherman. Looking over both shoulders, he probably realized either of his pursuers would catch up to him eventually. So he did the next best thing by falling in-bounds to keep the clock running.

The Gore of old might have had the wheels to take it to the house, but no matter. The 51-yard run, his longest of the season, was just enough to get the Niners into field goal range.

San Francisco took the lead and kept the lead, winning the game 19-17.

Looking at the remainder of their schedule, it's certainly feasible for San Francisco to win out the rest of the way. Their next two games are against the floundering Atlanta Falcons and Tampa Bay Buccaneers, who combine for a record of 7-19. They wrap up their season by visiting the Arizona Cardinals who they took care of in Week Six by a score of 32-20. Like I said, definitely doable.

The good news is, barring some disaster of epic proportions, it's looking likely that San Francisco will be playing football come January. The bad news? It appears the road to MetLife Stadium runs through Seattle, where no visiting team has won in two whole seasons.

Take that how you will.

The inevitable question was posed for Jim Harbaugh after Sunday's victory: does he anticipate a rubber match at CenturyLink Field?

"We anticipate the Tampa Bay Buccaneers."