When San Francisco has lost this season, they've struggled to generate explosive plays. How did they fare against Seattle's top ranked defense?

San Francisco has been inconsistent throughout the season in their ability to generate explosive plays. As you would expect, the lack of these big plays has been an issue in the 49ers' four losses this season, where they've produced an average of just 4.75 explosive plays per game. The passing game has predominantly been the issue in these games, accounting for a pedestrian five explosive plays in four games.

What exactly defines an explosive play? If you didn't happen to catch my advanced stat preview from last week, explosive plays consist of runs of at least 12 yards and passes of at least 16 yards. I haven't explicitly seen the 49ers' coaching staff define what they consider to be a big or explosive play, so I stole this definition from the guys over at Field Gulls. Are those cutoffs somewhat arbitrary? Sure. But I think they do a good job of picking up the types of plays we're looking for, more so than some of the other marks that get tossed around to define big plays, such as a blanket 20-plus yards for runs and passes.

With that, let's take a look at the explosive plays the 49ers' offense produced against the Seahawks.

Six explosive plays isn't exactly going to conjure up memories of the 2007 Patriots or anything, but it was better than we've performed against other top end defenses, such as the Panthers and Saints. However, these plays were extremely important ones in the game. Drives featuring an explosive play led to 16 of San Francisco's 19 points on the day. The only scoring drive that didn't have an explosive play was the field goal that followed Kassim Osgood's blocked punt.

With these plays having such a significant impact on the game, let's go to the All-22 and take a look at a few of the ways the 49ers were able to generate big plays against the Seahawks. 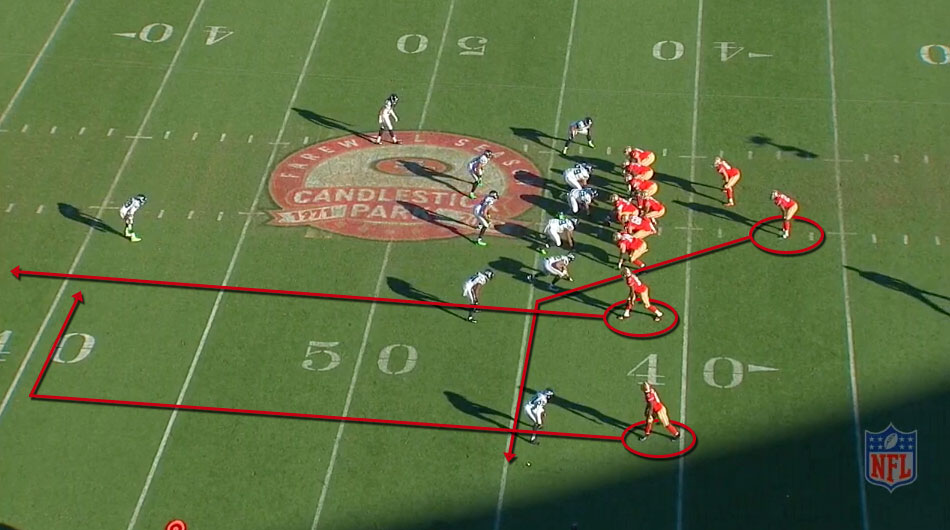 The 49ers come out in an Offset I formation with Anquan Boldin split wide to the left and Vernon Davis in the slot. San Francisco did several things throughout the game to limit Richard Sherman's impact and this was one of them. Seattle doesn't often have their top corner follow around a specific receiver, instead preferring to keep him to the offense's right on the wide majority of snaps. By aligning their top two receiving targets to the opposite side of the field, the 49ers can look to go to work against the Seahawks' weaker coverage players.

Seattle ends up running one of their base coverages, a Cover 3 zone. The route combination run by Boldin and Davis is setup to perfectly attack one of the weaknesses in this coverage, the seams. Earl Thomas is playing the deep middle of the field for Seattle and his job is to stay deeper than the deepest and not allow any receivers to get behind him. Davis is running what essentially amounts to a clear out route – he is attacking Thomas with a vertical route to occupy him and free up space for Boldin running the drag route underneath him. With Davis being the 49ers' primary deep threat, Thomas has to respect it and stay over the top of Davis's route. 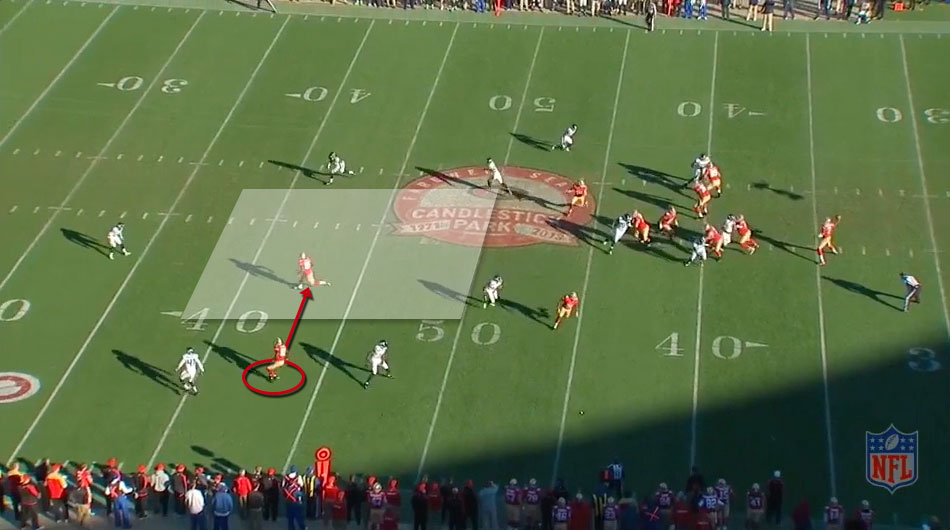 With Byron Maxwell, the corner aligned over Boldin, playing with outside leverage in his deep third zone responsibility, he's never going to be in position to make a play on the ball once Boldin breaks over the middle on his dig route. Kaepernick has plenty of time to throw and delivers a strike 20 yards downfield to move the ball into Seattle territory.

With the struggles of the passing game this season, nearly everyone involved with the offense has taken their turn in getting tossed under the bus. A popular one as of late as been offensive coordinator Greg Roman. Some of the criticism has been justified, but this was a game where after watching the coaches film, I thought Roman and the staff put together a fantastic game plan. One element of that game plan that I especially liked was the increased use of bunch formations.

Seattle's defense is known for being very aggressive in the secondary. They like to be physical at the line of scrimmage and try to disrupt the timing of the passing game. They were very successful with this approach in the Week 2 match-up between these two teams. There are several things an offense can do to combat this approach, but one of the best is through the use of bunch formations. You can see in the screenshot below, San Francisco has a bunch to the left of the formation. Whereas Sherman is up in press coverage on Crabtree on the single receiver side, Maxwell is forced to play in off coverage when faced with the bunch. Many of the route combinations that you will see teams run out of the bunch involve staggered or crossing releases from the receivers. This makes it difficult for the defense to be physical at the line of scrimmage because of the natural rubs and picks created by these releases. 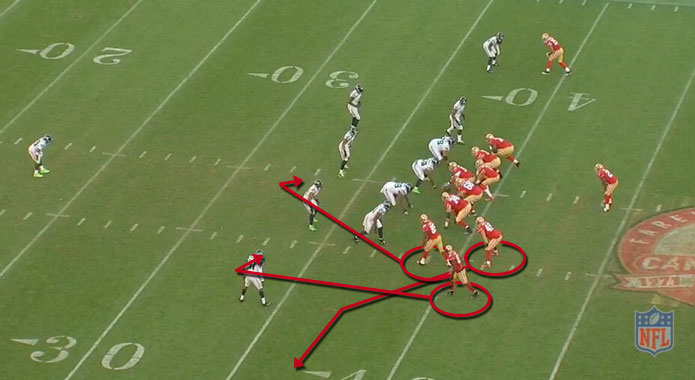 On this play, San Francisco runs what is commonly referred to as the "spacing" route concept. Spacing aims to stretch the defense horizontally and is very effective against zone coverages such as the Cover 3 that Seattle frequently uses. Davis and Boldin are going to run short curl routes while Bruce Miller is going to head into the flat. This route combo is going to attack Seattle outside linebacker Bobby Wagner, the outermost underneath pass defender to that side of the field. If he heads to his flat responsibility, Boldin will be open. If he sits with Boldin on the curl, Miller will be open in the flat. 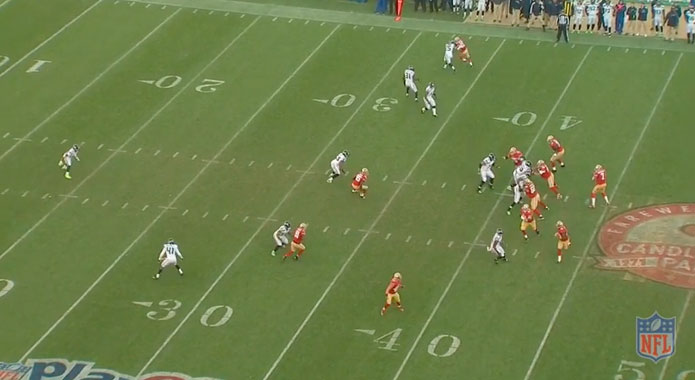 Wagner ends up sitting with Boldin's curl and Miller breaks open in the flat for what likely ends up as a 10-yard pick-up or so and a first down. Given how frequently it seems Kaepernick throws to Miller in the flat, it's a bit surprising he doesn't pull the trigger on this throw. With Boldin and Davis both initially covered on their curl routes, Kaepernick begins to float to the left. This is where Boldin shows off one of his greatest strengths – finding open space once the play breaks down.

Boldin begins to float along with Kaepernick to the left before spinning back inside and finding some open real estate in the middle of the field. There aren't many, if any, linebackers that are going to be able to stick with a receiver for any significant length of time and with a player as savvy as Boldin at finding those soft spots, it's easy money. Kaepernick makes an accurate throw on the run that allows Boldin to turn up field right away for some additional yards after the catch and a gain of 18.

Of course, the most important play of the game came on Frank Gore's 51-yard run late in the fourth quarter. 97 G-rub, as the 49ers call it, was the perfect storm of execution by the offense and miscues by the defense that is needed to break a play over 50 yards. 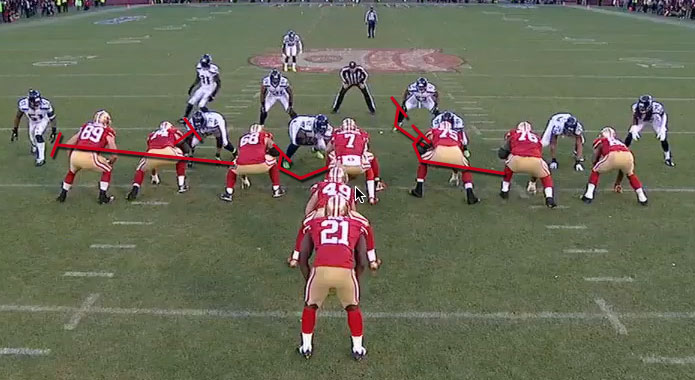 97 G-rub is actually a variant on the outside zone run known as the pin and pull. The pin and pull introduces a man blocking element – which is what the 49ers predominantly use in the running game – to a zone blocking play. You can utilize the pin and pull in a number of ways depending on the front of the defense, but in this instance the tweak comes in the assignments of left tackle Joe Staley and left guard Adam Snyder.

The pin and pull makes what would be two difficult reach blocks – where the offensive lineman would need to "reach" a player outside of him and attempt to turn him back inside – two much easier angle blocks. Rather than trying to reach outside to outside linebacker Bruce Irvin, Staley is going to perform a down block, or pin, on defensive end Red Bryant, who's aligned to Staley's inside shoulder. Bryant ends up making this an even easier block by attempting to shoot that inside gap, allowing Staley to use Bryant's momentum against him and take him where he wants to go. This frees Snyder up to pull to the outside and kick out Irvin, creating a nice, wide alley for Gore to run through. 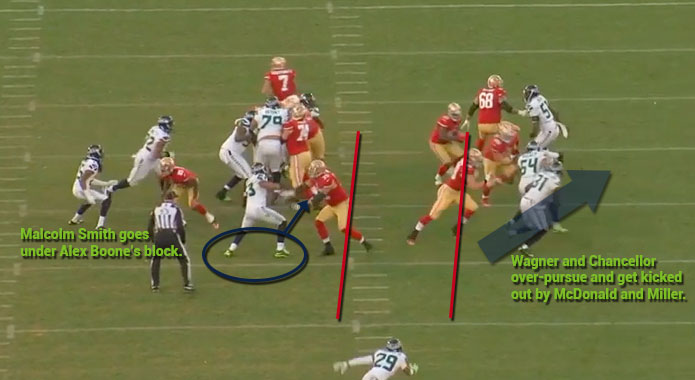 From here, Gore sets the rest of his blocks up beautifully. Once he gets through the hole, he can see Wagner and safety Kam Chancellor over-pursuing to the outside. Gore keeps pressing the outside hip of Miller before sticking his foot in the ground and cutting up field, allowing Miller and Vance McDonald to make easy work out of the two over-pursuing defenders.

The other key block comes from Alex Boone on the back side. Boone is working up to the second level to weak side linebacker Malcolm Smith. Once Boone is able to cut off Smith, Smith decides to cut underneath the block, which proves to be a poor decision. That gives him a terrible angle to try and cut off Gore and essentially takes him out of the play. Gore finishes things up with another great cut on Thomas, allowing him to bust free into the open field.

Though the 19 points and a cursory view of the box score wouldn't lead you to believe it, I thought it was an impressive performance from the offense this week. There were some missed opportunities to be sure – namely failing to get touchdowns in two favorable situations on possessions in the first quarter and Kaepernick's interception midway through the third. But considering the defense they were facing and how well the offense has performed against similar caliber defenses this season, it was a good step forward.

I choose to spend this article focusing on the offense's ability to generate explosive plays, but equally important is the defense's ability to prevent them. San Francisco's defense did a fantastic job of limiting these plays, allowing the 49ers to win the explosive play battle six to four. All four of Seattle's explosive plays came via the passing game, with the two big ones coming on nearly identical plays to Luke Willson over the deep middle of the field. The defense held the Seahawks without an explosive play in the running game for the first time all season as we consistently stayed in our base 3-4 defense against Seattle's 11 personnel (1 RB, 1 TE, 3 WR) unless it was an obvious passing situation. It was a successful approach, as the defense held Marshawn Lynch to just 3.6 yards per carry on the day.

Often times, too much gets made about a team "getting hot" as they enter the playoffs. However, slowly but surely, the 49ers' offense is becoming what we thought it could be prior to the start of the season. If they can continue to improve each week, as they've done over the last several, they can put themselves in position to be one of the scariest Wild Card teams in recent memory.