In case you missed it late last week, we are in the midst of raising funds to buy some bricks at the Levi's Stadium Fan Walk. The new stadium will feature an array of bricks that fans can purchase and inscribe with whatever they want (subject to team approval).

I had wanted to get a brick for Niners Nation, so I opened up a fundraising site at Go Fund Me. It didn't take long to meet the $200 goal for a brick. People kept donating so we decided to aim for two bricks. We reached the goal for a second brick (this one a bigger $495 brick), so we decided to aim for a third. We're getting close to that so I figured it was worth another post since not everybody was around last week.

I purchased the first brick last night. It will look like this:

In case you have no idea what this means, here is a basic rundown of the KSWOF story. It operates as an inside joke, but it has come to represent our irrational expectations for random players on the roster in training camp. Add in the "Rabble! Rabble!" and I think it perfectly personifies the craziness that can often go down on Niners Nation.

Here is what we are going with for the second brick: 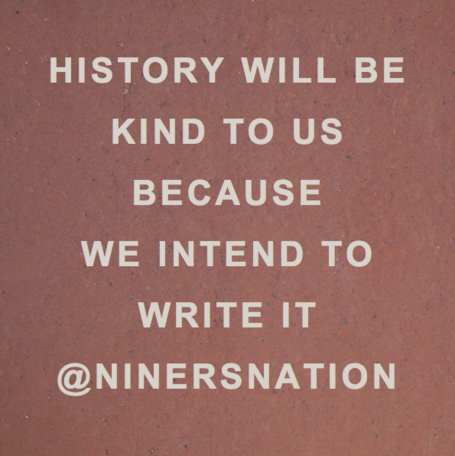 This quotation is an adjustment of a Winston Churchill quotation. Coach Harbaugh first mentioned it during the London trip as one of his favorites. I look at it as something that will stand the test of time (well, until they tear down the new stadium and build another new one!). And as socalisteph mentioned, the notion of writing history can actually apply to the website as well. I hadn't thought about that, but it makes sense.

For the third quotation, I'm open to suggestions, but right now I really like:

I'm open to suggestions, whether it be just getting two smaller plaza bricks, or going with the one big red brick. I think that third quotation makes a lot of sense for the brick, but I'm open to more.

I'm going to drop it in the comments. If you have other recommendations, post them as individual comments, and if you like certain suggestions, click the Rec button. If you are going to post a suggestion, each line is allowed 15 total characters (including spaces).