The 49ers won their fourth straight game, defeating the Tampa Bay Buccaneers in Week 15. They are slowly working their way up NFL power rankings. It certainly seems like the right time to get hot, right? New to Niners Nation? Sign up here and join the discussion!

The San Francisco 49ers put together a methodical win over the Tampa Bay Buccaneers in Week 15, and as such they continue to slowly creep up NFL power rankings. I'll try and add some power rankings as the day moves on, but for now, here are a few to give us a starting point for discussion.

The 49ers have won four straight, which matches the Baltimore Ravens for the longest active winning streak. It's kind of fitting that last year's two Super Bowl teams are the hottest coming down the final stretch of the regular season. The Ravens have stumbled along much of the season, while the 49ers had to overcome some early struggles to get to their current stature.

Who knows if it's enough to carry either of them through January and into February, but I'd rather be hot than cold heading into the playoffs. Both teams currently occupy their respective conference's sixth seed. The 49ers can move up a spot, while the Ravens still have a shot at claiming their division. For now, both are looking like very dangerous opponents come playoff time.

Back by popular demand, the BeatGraphs power rankings! They create "BeatPaths" and you can try and figure it out HERE. It seems like if A beats B, A will be ahead of B. And if A beats B and B beats C, A will be ahead of both. It's not quite as simple as that, but it's an interesting way to look at something that is mostly for entertainment value anyway. They have the 49ers in 11th place. 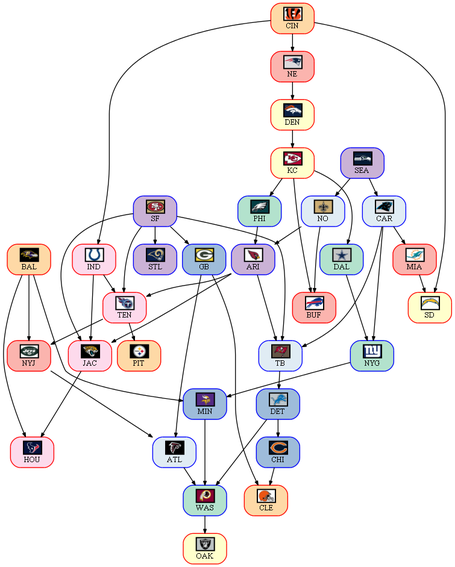