The Booth Review - 49ers vs. Buccaneers

"We still haven't played our best game yet, and that's the scary part."

Welcome back to The Booth Review. The San Francisco 49ers took care of business on Sunday, beating the Tampa Bay Buccaneers by a score of 33-14. What did we learn?

The best game. The complete game. The perfect game.

It's something that every team strives to achieve every Sunday - to collectively put forth, as one cohesive unit, their very best performance in all three phases of the game. And even through Week 15 of the regular season, the San Francisco 49ers are still searching for theirs. It's a subject that has been alluded to, by both players and coaches, a handful of times recently. But if you blinked, you probably missed it.

After San Francisco narrowly defeated Seattle two weeks ago, Anquan Boldin was asked about the significance of a team hitting their stride in December.

"We're getting hot at the right time and that's what you want. You want to be playing your best football in December and January," he said. "For us, we feel like we're hitting our stride. We're still chasing that complete game. We don't feel like we've put it all together just yet. We'll continue to strive to get better.

"Hopefully you guys will see us play that complete game coming soon."

A week later, that same sentiment was echoed by Frank Gore after the victory in Tampa Bay.

"This is when, as a team, you want to get good, this time of year. We're showing people that we're taking steps," Gore said. "We still haven't played our best game yet, and that's the scary part." 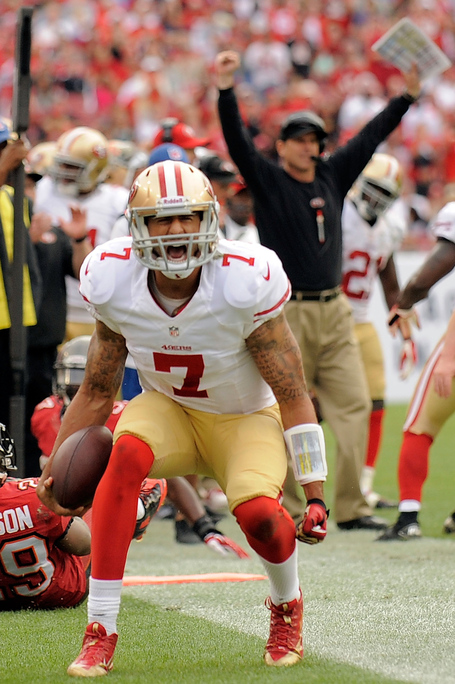 Then, on Tuesday morning, as he usually does, Jim Harbaugh made an appearance on KNBR to talk about Tampa Bay. Harbaugh was asked specifically about the aforementioned quote by Gore and if he could expand on it.

"I think everybody strives to play the perfect game," Harbaugh said. "Right now, our defense is running around, they're smacking people, special teams is rolling. The runner will run, the quarterback will hit the pass, the receiver will make the catch.

"There's a lot of really good things that our football team is doing."

It's true that San Francisco has yet to play their 'perfect game'. Hell, they still haven't played a game in which they had all eleven offensive starters healthy and on the field together.

Last season, especially after Kaepernick took the reins in Week 11, we knew exactly what to expect from the San Francisco 49ers. They were lethally efficient and firing on all cylinders.

So far this year, the team has managed to record double-digit wins in spite of a constantly-fluctuating offense. Fourteen games later, I still can't say with complete confidence that I know what I'm getting from Kap and company. Can you?

It's been patchwork since day one, but when you're winning games, it's hard to complain. However, with only two weeks left until the postseason, presuming the Niners make it there, it's becoming more and more worrisome.

The way I see it, there are two possible scenarios.

We've seen teams in past years that get things together at just the right time. The 2011 New York Giants come to mind, and most recently, the 2012 Baltimore Ravens (Sorry!). They get hot and stay hot all the way to the Super Bowl before winning it all. Obviously, this is the outcome we're all crossing our fingers for.

Or the very opposite can happen. San Francisco could stumble into the playoffs still not entirely understanding what kind of team they want to be and go toe-to-toe with a team that does. Once...maybe twice...and done. This is the outcome we don't want.

Two possible scenarios, and for the usually-good, sometimes-awful San Francisco 49ers, both are equally plausible. Which team will we see come January?

If there's one thing we've been able to count on over the last several years, it's San Francisco's all-time rushing leader Frank Gore.

For Gore, Sunday marked yet another milestone in his already-illustrious career. After rushing for 86 yards against the Tampa Bay defense, Gore officially recorded his seventh career season with over 1,000 rushing yards. Comparatively, no other San Francisco running back has had more than three - a true testament to Gore's place in Niners' history. Before his playing days are done for good, there's no doubt in my mind that he will be remembered as one of the greatest to ever don the scarlet and gold. 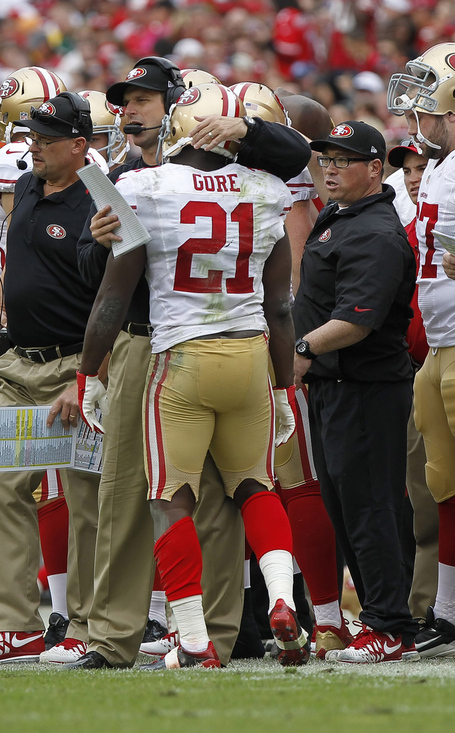 But let's enjoy him while we still have him, yeah?

On a 1st-and-10 early in the third quarter, Gore took the ball and cut through the middle of the offensive line right into the heart of the Bucs' front-seven.

He initially made contact with a defender after gaining two yards, but that wasn't enough for Gore. He kept his legs pumping, turning around and backpedaling even further before falling forward to make it a six-yard gain. It was a play so precisely indicative of what we've come to expect from him.

San Francisco's running attack was noticeably more well-rounded than it has been at any other point this season.

Kendall Hunter, Gore's usual spell, saw action early in the first quarter and finished the game with eight carries for 40 yards. Even LaMichael James busted off a long run, blazing down the left sideline for 21 yards.

Gore wasn't the only Niner with a record-breaking day. Vernon Davis became the first tight end in NFL history to register two seasons with at least 12 receiving touchdowns.

Right before the half, Davis outran safety Mark Barron to make the scoring reception. His momentum took him past the end zone, crashing into the wall and bouncing backwards onto the ground.

Davis remained there for a few moments before Kap rushed over to help him back onto his feet and off the field. Fortunately, he would be just fine.

I apologize in advance if I'm beginning to sound a bit like a broken record, but I can't express enough how happy I am to have someone like Eric Reid on the team. While he's only a rookie, Reid is demonstrating himself like a veteran who's been in the league for over ten years.

Late in the game, Tampa Bay had an opportunity to do something to cut into San Francisco's 19-point lead. Mike Glennon, backed up in his own end zone, threw up a prayer to Chris Owusu. The ball was under-thrown and bounced off Owusu's hand to Reid who then tipped it up into the air himself. Reid made the easy interception at the 22-yard line. He had a caravan of white jerseys - five to be exact - ready to block for him and a clear path into the end zone.

It was about as sure a pick-six as any defender will ever see in his career. But what did Reid do instead? He fell to the ground immediately. He didn't need any more than a second to think about it; he already made up his mind. 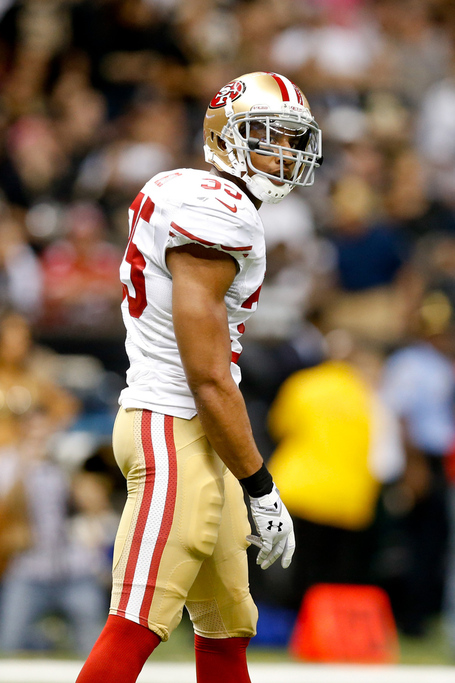 "I think we're going into the end of the year. Let's preserve our bodies and let's go home," he continued. "I looked up and I saw nothing but white jerseys. You kind of think about it, but at the end of the day, I think I made the right decision."

How beautiful is that? Complete selflessness defined in a single play. As Reid and the defense walked off the field, team captain Patrick Willis gave him a hearty slap on the back as if to say, 'You did the right thing, kid.'

The return-touchdown would have certainly added more to Reid's resume, perhaps propelling him further into the conversation of Defensive Rookie of the Year honors. But he knows there are far more important things to consider than personal accolades.

"It's a compliment to win that, but I'm just focused on helping this team win games," Reid said. "I'm sure winning a Super Bowl would be a lot better than winning Defensive Rookie of the Year."

I've never been a big fan of playoff hypotheticals. I'd much rather just wait and see, figure it out when we get there. But I also understand that I'm probably in the minority in that regard.

So if you happen to be one of those who'd prefer to have their playoff picture spelled out, I'd refer you to the always succinct and eloquent Matt Barrows of The Sacramento Bee. He did a great job of explaining every possible playoff scenario in a way that's easy to read and understand. All credit for the following quote goes to him:

As it stands now, the 49ers have the sixth seed because the two other teams with 10-4 records - the Panthers and the Saints - beat San Francisco earlier this year. But Carolina and New Orleans will play each other next week. The winner likely will go on to win the NFC South and get the No. 2 seed. Should the 49ers beat the Falcons a week from today and Arizona in the finale, the Carolina-New Orleans loser probably would get the sixth seed. ("Likely" and "probably" are the key words when talking about these scenarios).

If everything plays out as expected, the fifth seed is the more coveted spot. If the 49ers are the fifth seed and they win their opening-round game, say in Detroit or Chicago, they would avoid having to go to play the likely No. 1 seed, Seattle, in the second round.

The absolute, best, pie-in-the-sky, ain't-gonna-happen scenario for the 49ers is that they win their final two games, the Seahawks drop their final two and the Saints and Carolina lose at least one more game. That would make the 49ers the NFC West champions, give them a first-round bye and secure them home-field advantage throughout the playoffs.

A more plausible path that avoids Seattle? The 49ers get the fifth seed and the Panthers the sixth. If both won in the opening round, San Francisco would head to New Orleans in the second round while Carolina would go to Seattle. The Panthers lost to the Seahawks in Charlotte, N.C. in Week 1, but the game was close - 12-7. The Panthers and 49ers seem like the most likely teams to pull an upset over the Seahawks, who have the best chance of obtaining the No. 1 seed.