All-22: 49ers pass defense is playing at an elite level

Share All sharing options for: All-22: 49ers pass defense is playing at an elite level

The San Francisco 49ers are playing their best football of the season. With much of the discussion surrounding the 49ers' now four-game winning streaking revolving around the improvements made by the offense, the defense has somewhat quietly regained its status as one of the top defenses in football.

Now, many of you may not exactly agree with the sentiment that the 49ers' defense ever stopped being one of the league's best, and I wouldn't argue that point with you too much. However, there were definitely stretches over the first half of the season where the defense wasn't playing at the caliber that we have come to expect over the last several seasons. According to Football Outsiders' DVOA rankings – a metric that the 49ers' defense has finished in the top three of in each of the last two seasons – the 49ers had a roughly league average defense over the first nine weeks of the season, ranking 15th. Since then, San Francisco has ranked fifth in defensive DVOA.

That second half improvement has been primarily a result of the pass defense. Over the first half of the season, San Francisco's pass defense ranked 12th with a DVOA of 0.9 percent. Following the bye, that number has jumped to a minus-22.1 percent (negative numbers being better for the defense), good for fourth best in the league.

Against the Buccaneers, the trend continued. Strictly by the numbers, it wasn't quite the same type of dominating performance that they've been putting up recently, but it was good enough for the the defense's sixth consecutive game with a negative DVOA. In the passing game, Mike Glennon was held under 200 yards while the Bucs managed just three explosive plays through the air. Let's go to the All-22 and examine what it is that has made the 49ers pass defense so successful as of late.

Getting Off The Field

San Francisco has been among the best in the league in third down defense, especially against the pass. On the season, they rank second in pass defense DVOA on third/fourth down. In Tampa Bay, that strength was incredibly prevalent as the Bucs managed only a single conversion on 12 third/fourth down attempts. 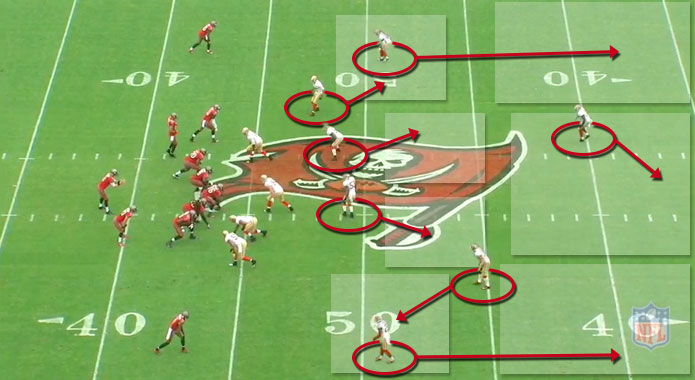 On this play, Tampa Bay is facing a third down and seven from their own 44 yard line. The Bucs have their 11 personnel (1 RB, 1 TE, 3 WR) on the field and are going to look to attack the middle of the field with Vincent Jackson and Tim Wright, who are in a stacked alignment to the left of the offense. The 49ers match-up with their Nickel package.

San Francisco played a lot of Cover 3 zone in this game and that's what we see from them on this play. Corners Tarell Brown and Tramaine Brock are playing deep zones on the outside thirds of the field, with safety Donte Whitner in the deep middle. With four rushing the passer, that leaves four players in short, underneath zones. As you can see from the screenshot below, all four underneath defenders end up right at the first down marker. 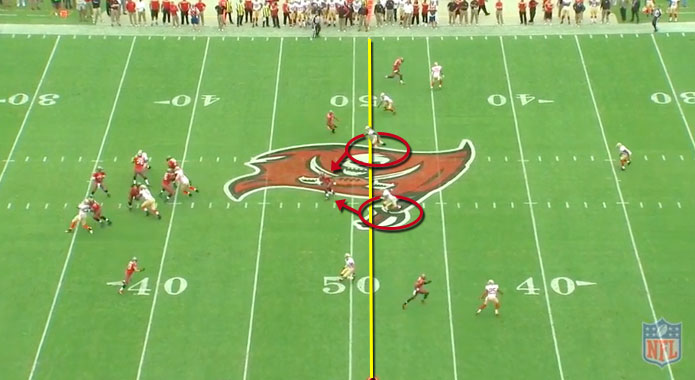 The two key defenders end up being inside linebackers Patrick Willis and NaVorro Bowman. Willis and Bowman are fantastic at getting good depth on their drops when in zone coverage and keeping any short routes in front of them. This allows them to use their closing speed and tackling ability to come up and make the stop immediately after the catch, preventing yards after the catch and, often times, the first down.

Tim Wright makes the catch in the middle of the field on his whip route, but Willis and Bowman smother him immediately after the catch and the result is another failed Buccaneers' drive. This type of play shows up frequently on film and it's not just from our two All-Pro inside linebackers. Many of the coverages that the 49ers play are designed to keep plays in front of them, preventing the big play and allowing their players – all of whom are good tacklers – to come up and make stops.

The 49ers' pass rush has seen an uptick in production since Aldon Smith has had a chance to settle back into a full-time role. In the last four weeks, San Francisco has recorded 15 of their 36 sacks on the season, or 41.6 percent of their overall production. Aldon has been directly responsible for four of those sacks, but it's clear that his presence and the fact he's playing at a high level is making things easier for the rest of the guys up front. And when offenses don't give him some extra attention? Well, bad things have been happening. 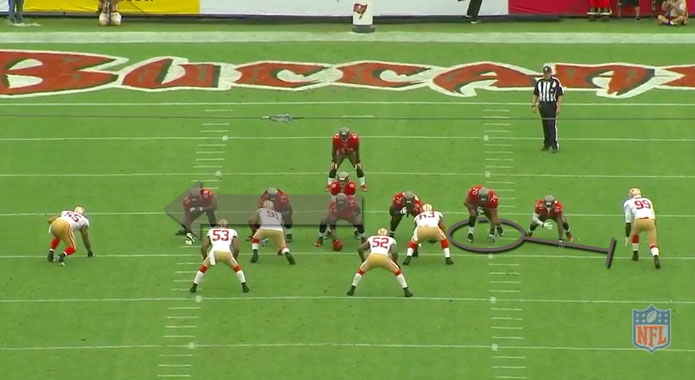 The Bucs come out once again in their 11 personnel, with the 49ers matching with their Nickel. Tampa sends out all five of their eligible pass targets, leaving just their offensive line in pass protection against San Francisco's four pass rushers. The Bucs' offensive line slides to the right, leaving Aldon one-on-one with left tackle Donald Penn. 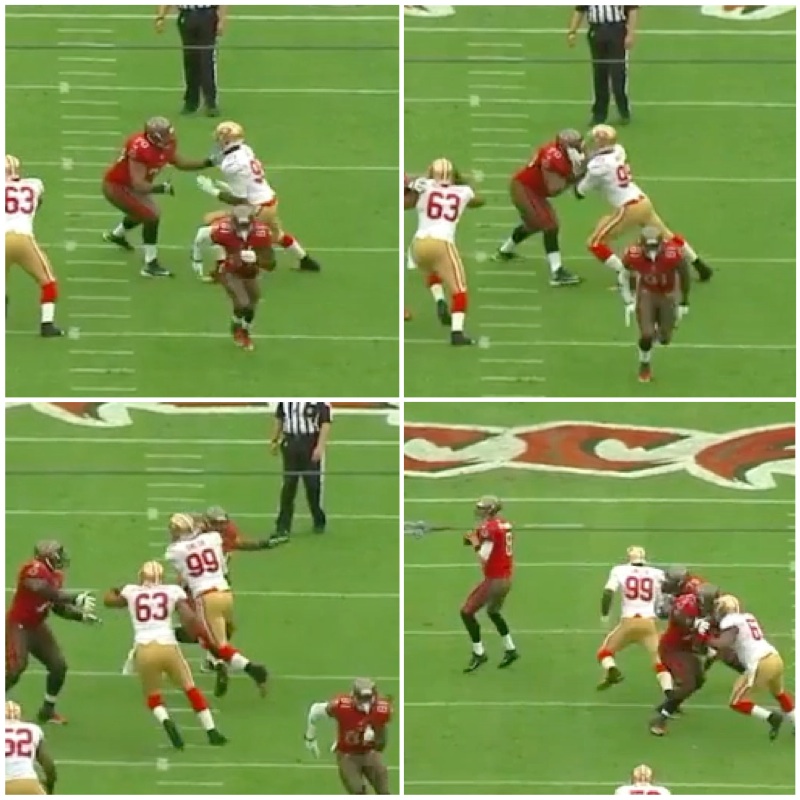 Different coaches may have slightly different aiming points, but for the most part you want your tackles on the inside number of the pass rusher. Keeping this inside leverage allows them to have good position against inside moves while also allowing them to push the pass rusher up the field and beyond the quarterback if they speed rush. On this play, Penn gets just a little too far outside is his set – you can see in the screenshot above that Penn's first contact is with his outside hand to Aldon's outside shoulder – giving Aldon an opening to the inside. Aldon is able to swipe down across Penn's hands and jump to the inside all in one fluid motion and from there, it's game over for Mike Glennon.

Aldon gets many of his sacks in this manner. While he has good speed, he's not actually that effective of a speed rusher around the edge. However, he's very good at setting up blockers to open them up for one of his inside moves or a bull rush. With 8.5 sacks in nine games, Aldon is well on his way to a third consecutive season with double digit sacks to begin his career.

As good as the 49ers' pass defense has been playing, I'd be remiss to pretend their isn't still room for improvement. With Willis and Bowman around, one of the 49ers' defensive strengths has always been defending tight ends. On the whole, that remains the case this season as they currently rank fifth in DVOA against tight ends. In spite of that, they've given up a few big plays to tight ends in the last two weeks that have been a bit concerning. Against Seattle, Luke Willson beat us for plays of 29 and 39 yards. Tampa's Tim Wright found space for gains of 26 and 24 yards. Three of those four plays came on very similar routes by the tight end in question (the fourth was a broken play where Wright was able to get free after Glennon started scrambling). 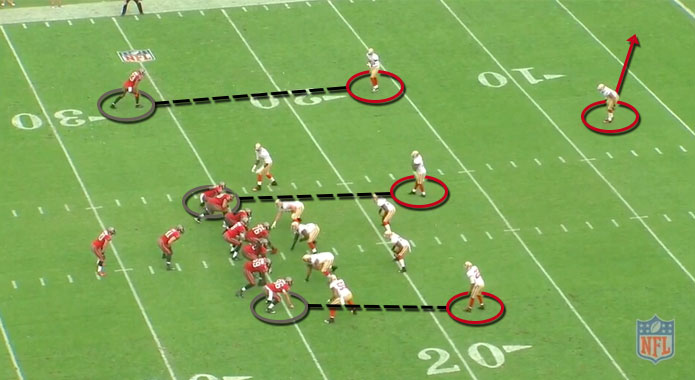 On the first play of the fourth quarter, Tampa Bay comes out in 22 personnel (2 RB, 2 TE, 1 WR) with San Francisco in their base 3-4 alignment. Prior to the snap, Wright motions across the formation from right to left and Whitner follows him, indicating that he may be in man coverage on the play. Now, even with the coaches tape, identifying coverages and responsibilities can be a bit tricky. At times it can be incredibly obvious to see where the mistake happened. Others, you can only do your best to infer.

On this play, the 49ers appear to be in a combo coverage. That is, some players in man coverage with others in zone. At the top of the image, Brock and Reid are bracketing Vincent Jackson. As the lone deep safety, Reid immediately drifts over the top of Jackson after the snap, while Brock stays underneath for any shorter breaking routes. Carlos Rogers is manned up with tight end Kyle Adams at the bottom of the image and Whitner does in fact end up manned on Wright. Three linebackers – Willis, Bowman and Brooks – are in short, underneath zones. 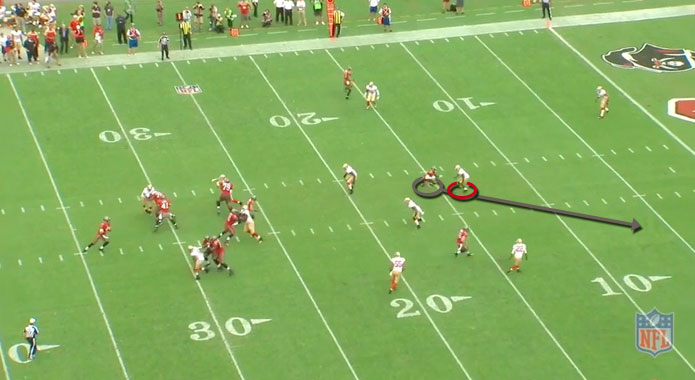 As Wright is about to make his break across the field on the deep post route, Whitner guesses wrong and by the time the ball is in the air, he's five yards behind Wright and it's an easy score for the Bucs. Whitner has never been great in coverage, especially man coverage, but he has been better this season. Here, it looks like he just gets caught taking a peak in the backfield and it cost him.

I mentioned that this play was similar to the two big plays given up to Luke Willson in the Seattle game. He was able to find large openings on the same type of route from roughly the same pre-snap alignment. Even though this hasn't exactly been a widespread issue – the 49ers remain one of the better teams in the league at preventing explosive plays – it will be something to watch for going forward. These types of coverage breakdowns and subsequent big plays are an easy way for an inferior team to hang around longer than they should and provide good teams an advantage that can be difficult to overcome.

Considering the cornerback situation headed into the season combined with the fact that we were going to be starting a rookie free safety, the performance of the pass defense has been a pleasant surprise. While last season, headed into the playoffs the pass defense was beginning to be exposed, this season is just the opposite. There's no mysterious momentum at work here that's going to carry us to the promised land. It's much better than that. The pass defense, and defense as a whole, is actually improving and is playing better than they have at any point this season.