The 49ers controlled their 23-13 win over the Rams for most of the game, but really pulled away on a series of plays to start the fourth quarter.

The San Francisco 49ers put together a solid 23-13 win over the St. Louis Rams on Sunday, but they were not really able to completely pull away until early in the fourth quarter. Much of the game had been a field goal exchange, but with a 16-6 lead at the start of the fourth quarter, the game turned for good.

The 49ers appeared ready to put the game away at the end of the third quarter, after Michael Crabtree hauled in a 60-yard reception to set San Francisco up at the Rams 20. Two plays later, however, Frank Gore coughed up the ball, setting the Rams up on their own 20.

The 49ers defense put together a strong series, forcing the Rams into a three and out. The Rams set up for a punt, and then proceeded to run a fake. You might recall the Rams ran a pair of fakes last season in the 24-24 tie at Candlestick Park. Rams punter Johnny Hekker played some quarterback in college, and he completed two passes to convert fourth downs on punt fakes.

Things did not work quite so well this time around. The Rams ran a direct snap to up-back Matt Giordano. He ran to his left, looking to hand the ball off to Stedman Bailey. The 49ers read it well and Giordano kept the ball. Anthony Dixon quickly ran him down and made the tackle for a loss and turnover on downs. Here's a GIF of the play, courtesy of the Reddit Week 13 highlight thread.

On the first play after the botched fake, the 49ers quickly struck. Colin Kaepernick rolled out to his right and connected with Vernon Davis at the 11. Davis turned and leapt over cornerback Trumaine Johnson (it might be safety Rodney McLeod). Here's another GIF courtesy of Reddit.

Given what we saw earlier when T.J. McDonald tackled Vernon Davis in what Scott Hanson described as a "tender area", the leap seemed to indicate all was well down there. This followed an earlier play with an even more impressive leap. A photographer got a great shot of that one with this picture: 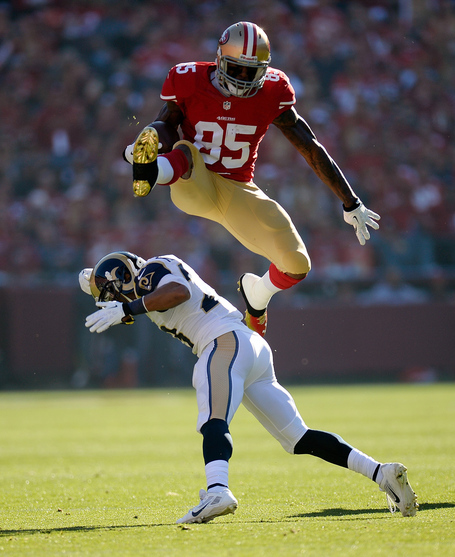 After the game, Anquan Boldin was asked about the leaps, and suggested Vernon stay on the ground. It does open the door for injury, but given his athleticism, he's one of the few guys who can get away with it.