The 49ers welcomed back wide receiver Michael Crabtree in their Week 13 win over the St. Louis Rams. What did it mean for the offense?

Share All sharing options for: Michael Crabtree returns, who ya gonna double now?

The San Francisco 49ers handled their business on Sunday, emerging victorious over the St. Louis Rams. The offense was a bit spotty at times, but they showed some improvement. The offense has work in front of it, but with improvement each week, the team could be ready to get truly hot when it matters most, in January and maybe February.

We'll have to look back at the game film to really see what happened, but my initial impression was that the return of Michael Crabtree opened up Anquan Boldin a bit more. Earlier in the week, someone tweeted this picture at me: 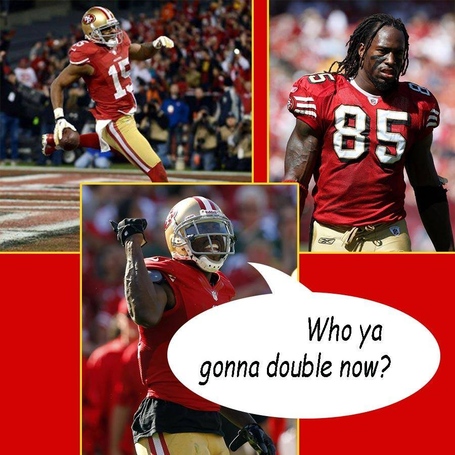 The picture is amusing and fires us up, but there is also a significant truth to it. The 49ers rolled out Vernon Davis and Anquan Boldin through the first three months, and even that was limited early on when Vernon Davis suffered an injury. Even when both were on the field, defenses paid no mind to anybody else in the pass catching game. We hoped to see Colin Kaepernick try and throw more of his receivers open, but it just was not happening.

The return of Crabtree brings back another of what Jim Harbaugh likes to describe as a "trusted agent." Kap did not try to force too much at Crabtree, but his mere presence was essential. Mario Manningham ended up catch-less and target-less, as Kap was content focusing on Boldin. He ended up connecting with Boldin for nine receptions (on 13 targets) for 98 yards.

After the game, Colin Kaepernick, Anquan Boldin and Michael Crabtree all went to the press conference together:

We got jokes about Crabtree taking on double-teams, but that really is true. Colin Kaepernick is still developing his game, and he needs his weapons out there to continue his development. Sure we'd love to see him turn average or mediocre receivers into good or great receivers, but that just isn't happening right now. And that's fine. Kap has tremendous potential, but he is still a work in progress. There is no shame in needing more quality receivers to help open things up.

There was all sorts of judgments thrown around about Kap through the first 12 weeks of the season. The return of Manningham and now the return of Crabtree are big reasons why I don't think we could really make too many grand proclamations about Kap. Opinions were certainly welcome, but even then I felt like we weren't fully in a position to assess Kap's entire skillset. We'll learn a lot more about where Kap is at if the team can stay healthy the final month of the regular season.