Joe Staley injury update: Walking without crutches while we wait for MRI news

Joe Staley is going through the process of figuring out the extent of his MCL sprain. We're hearing more details that bode relatively well for Staley.

Share All sharing options for: Joe Staley injury update: Walking without crutches while we wait for MRI news

The San Francisco 49ers are still awaiting the results of Joe Staley's MRI (or at least the information has not leaked out), but for now, the injury does not appear to be as bad as it could have been. After Staley left the game, he was limping, but still able to support himself. He currently has a brace on, and Matt Maiocco tweeted this out:

Joe Staley's MCL injury does not look nearly as bad as Mike Iupati's was. He's walking gingerly but not using crutches.

The MRI will confirm whatever is actually going on, but this is a step in the right direction. It has already been reported that he will sit out Sunday's game against the Seattle Seahawks. Maiocco tweeted Staley is "expected to miss a couple games", so we'll likely have to take this thing week-to-week.

Earlier today, I grabbed a quick screenshot of the moment where Staley injured his knee: 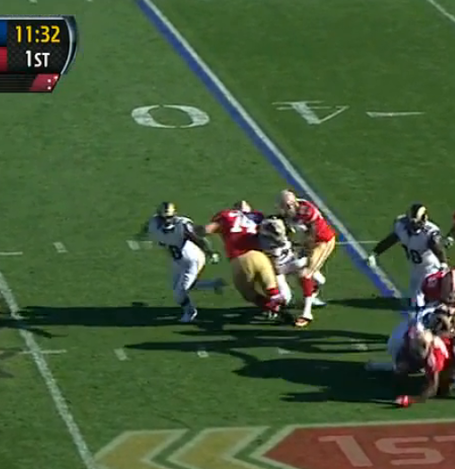 Staley was on the move, and as you can see there, he was sort of chipped on the knee by the Rams player. Staley went down, but was able to get off the field without support. He was later seen on the sideline without crutches and generally able to get around.

While it is called an MCL "sprain", it is actually a partial tear of the ligament. Over the weekend, socalisteph put together a thorough look at the MCL in discussing Mike Iupati's injury. If you haven't read it, I recommend giving it a look as it will likely answer a lot of your questions.