Time certainly does fly by! Today marks the seventh birthday of Niners Nation. On December 22, 2006, NN got started with this welcome post. The picture above is what the site looked like back then, although that particular picture is from January 11, 2007, so three weeks into things. You can see that full page HERE, courtesy of the always fun Web Archive. The sit allows you to go back and look at snapshots of websites throughout time.

Thanks to all who have frequented the site over the years. It's gone from a site that drew 2,023 visitors the first week, to a site that during the playoffs drew that many visitors in less than an hour. For a bit of an apples to apples comparison, in September 2007, the site drew approximately 26,450 visitors. In September 2013, the site drew somewhere on the order of 1.4 million visitors. It's gotten just a little bit busy here.

Obviously things posting frequency and age have boosted that number tremendously, but I find it really cool to see how far this site has come in seven years. I'm not normally one to insert myself into the conversation, but for this kind of thing, I don't mind it. Obviously it's been a lot of writing by numerous parties. James Brady has been around most consistently the longest, but there have been a lot of people who contributed to the site. And of course, all you 49ers fans on the Interwebz have had plenty to say.

All in all, it has been a fun ride, and will continue to be say for the foreseeable future. If you want to go back and check out old content, you can go to the Archives and take a trip down memory lane. It's interesting to see the changes in posting frequency. Early on, I'd post once or twice a day. Now, well, it's obviously just a little bit more than that.

If you don't have time to check out the Web Archive pages, here are a few screenshots over the years since we started making changes from the look above. Here's a look at the site in August 2008: 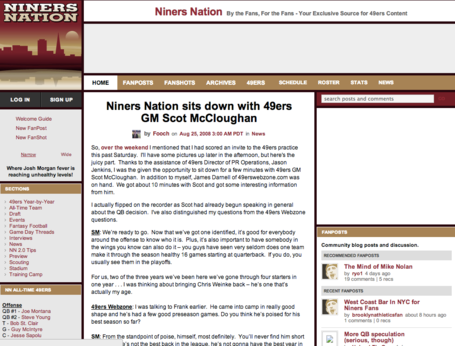 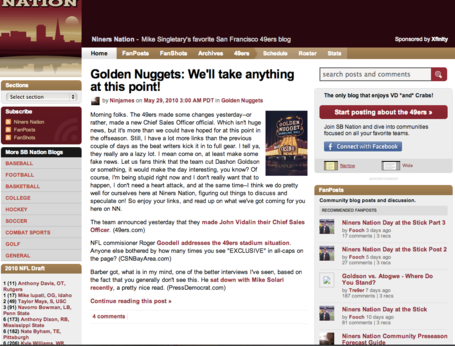 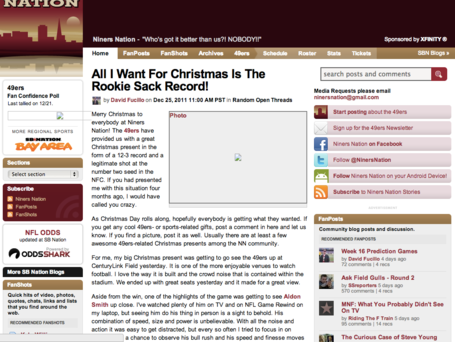