Despite the 49ers' worst defensive performance in two months, Patrick Willis and NaVorro Bowman showed why they're the best inside linebackers in football on Monday night against the Falcons.

Share All sharing options for: 49ers vs. Falcons: Patrick Willis and NaVorro Bowman shine amid a shaky defensive performance

Well, it didn't go quite as expected, but the San Francisco 49ers punched their ticket to the postseason for a third consecutive season and closed out Candlestick Park in thrilling fashion.

While I think we were all pleased with the outcome, it was far from the complete performance that we've been looking for. On the offensive side of the ball, the light switch didn't come on until half time. In the first half, the 49ers failed to crack 100 yards of offense before reeling off four consecutive scoring drives of at least 60 yards in the second half.

On defense, it was an up and down performance that on the whole was the worst they've played in a couple months. The pass defense in particular struggled, as Matt Ryan threw for nearly 350 yards and was repeatedly able to find Roddy White when the Falcons needed to make a play. According to DVOA, only the opening week effort against Aaron Rodgers and the Packers was worse this season.

When good things were happening on defense, Patrick Willis and NaVorro Bowman were usually involved. The two All-Pro inside linebackers were all over the place on Monday night, accounting for a combined 29 tackles. Now simply looking at tackle totals can often be misleading – it's far more important that those tackles are preventing the opposing team from picking up first downs rather than simply cleaning up big gains down the field. But even when you dig a bit deeper, it was still quite an impressive performance from the linebacking duo.

According to Pro Football Focus, Willis and Bowman combined for 11 stops on the night. Stops are defined as plays in which a defender prevents the offense from picking up the prerequisite amount of yardage towards converting a first down. The eight stops by Willis were a season-high and his most in a game Week 10 of the 2011 season. Bowman, of course, closed the game out with the most important play of them all.

On NaVorro Bowman's game-winning interception, it was the 5th time in 618 pass plays this season the #49ers rushed the QB with seven guys.

After that type of performance on a national stage, now seemed like as good of a time as any to take a look at a few of the things that make Willis and Bowman the best inside linebackers in the league.

Taking on blockers in the run game

Vic Fangio places a lot of trust in the ability of the 49ers' front to stop the run. This is especially true when the 49ers are in their nickel package, where they almost never drop a safety down into the box to assist in run support. Much of this trust comes from the work that Willis and Bowman are able to do in this area. 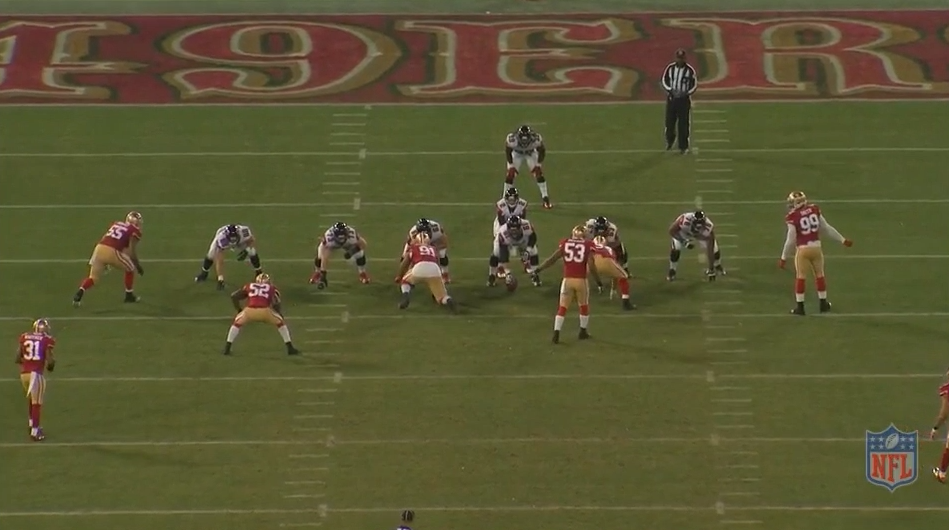 The Falcons come out in 11 personnel (1 RB, 1 TE, 3 WR) and the 49ers match with their nickel. As you can see from the image above, Atlanta has six blockers to match-up with the six defenders San Francisco has aligned in the box. With everyone accounted for, those are exactly the type of numbers that offenses are looking for in the running game. If each blocker is able to execute their assignment, it'll be a successful play for the offense.

At the time of the handoff, you can see that the Falcons are running a singleback power play. Center Joe Hawley is down blocking on Justin Smith, right guard Peter Konz and right tackle Ryan Schraeder get the double team on Ray McDonald before Schraeder moves up to the second level to cut off Bowman, leaving left guard Justin Blalock pulling around the double team to pick-up Willis. Again, every defender in the box is accounted for, which means that someone is going to have to beat their blocker in order to stop the play. Willis does a fantastic job of this. 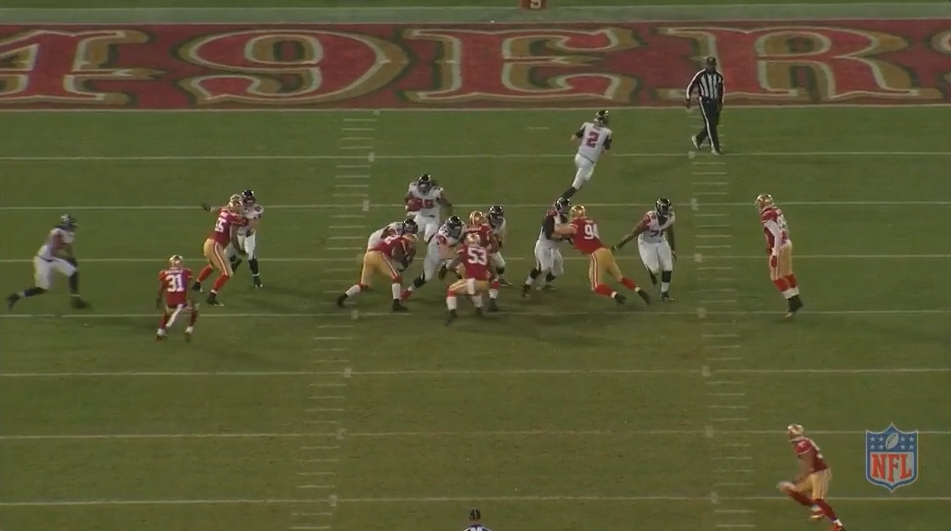 By the time Steven Jackson has received the ball, Willis has diagnosed the play and is moving downhill to fill the rushing lane. Rather that sitting back and waiting for the play to come to him, he attacks it and meets Blalock at the line of scrimmage. Willis wins the leverage battle and is able to get underneath Blalock's shoulder pads, knocking him off his path, before sliding through the crease to make the stop.

An almost identical play happened later in the game, with Bowman taking on the fullback in the hole before shedding him and making the tackle for a minimal gain. These types of plays are common occurrences and are an important reason why the 49ers are able to play the style of defense that they do.

When breaking down the success of the 49ers' pass defense last week, I highlighted the ability of Willis and Bowman to keep things in front of them in zone coverage before closing once the ball was thrown and making the tackle with minimal yards after the catch. However, the two inside linebackers are also asked to play a good amount of man coverage on the opposing team's running back and tight end. 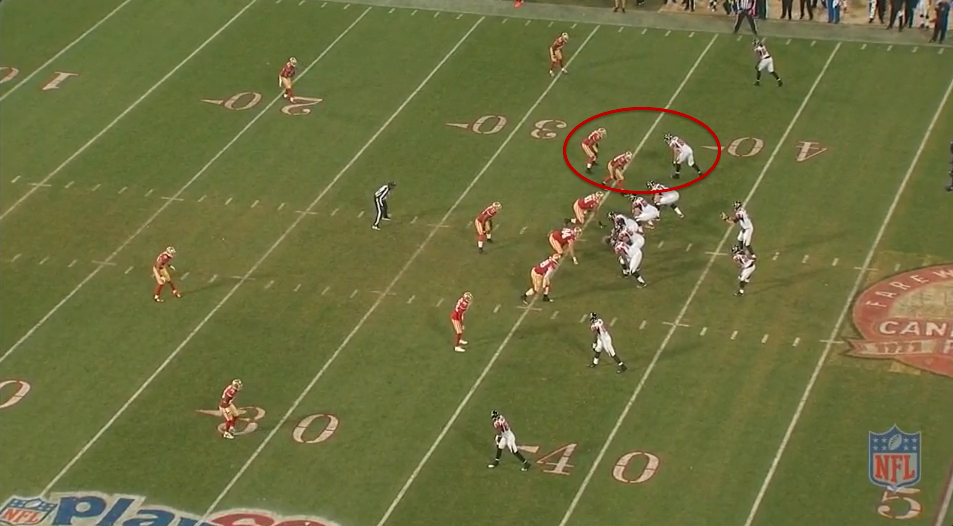 Here, the 49ers are again in their nickel package matched up against the Falcons' 11 personnel. San Francisco calls a quarters coverage with their three underneath defenders in man coverage. This leaves Willis manned up on Tony Gonzalez, who is flexed out in the slot to the right side. 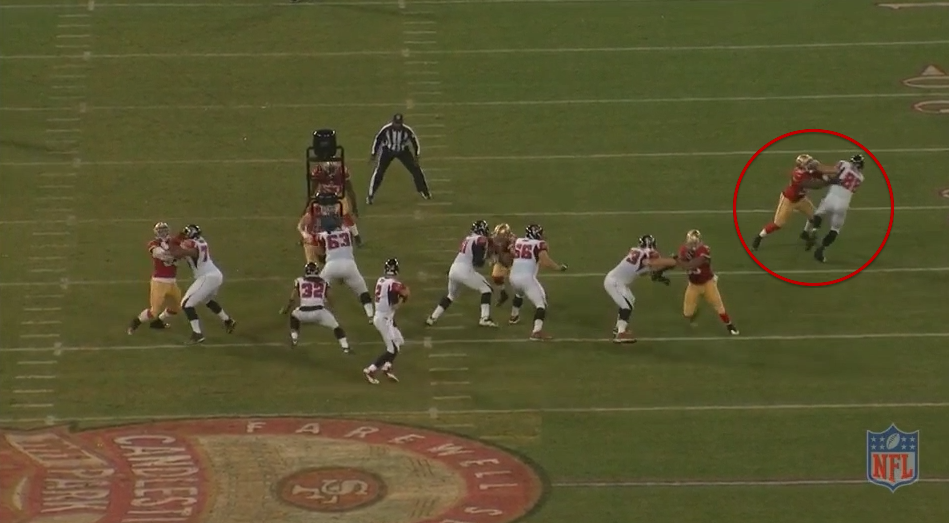 Willis is able to get a good bump on Gonzalez after the snap, forcing him to go to the outside on his seam route. As Gonzalez is working is way around the bump, he's actually able to knock Willis a bit off balance, leaving him out of position and allowing Gonzalez to regain inside leverage. With Gonzalez's ability to haul in contested catches, this would typically be more than enough to ensure the reception. This is where Willis's ability really shows. 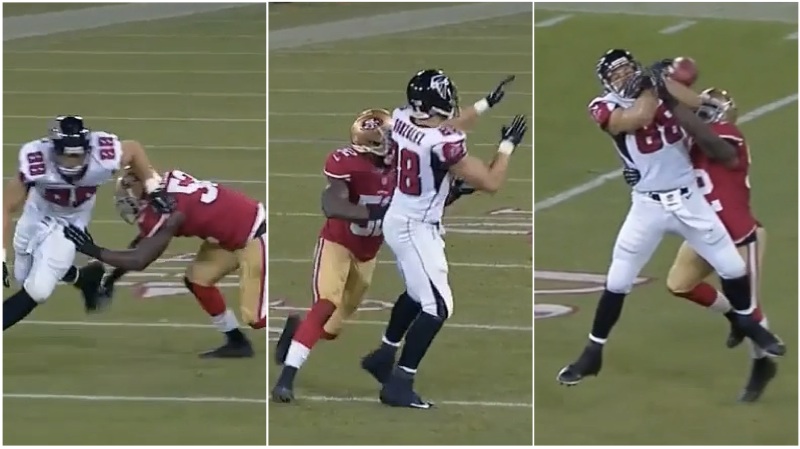 One of the more difficult things for defenders to do – even for cornerbacks – in pass coverage is to get their head around and locate the ball without allowing the receiver to gain additional separation. Willis is able to recover from getting knocked off balance and do exactly that, an impressive feat for a linebacker. He finishes the play off by getting his hand up and preventing Gonzalez from making the grab.

San Francisco has consistently been among the best teams in the league at defending tight ends. They've ranked no worse than seventh in DVOA against tight ends in the three seasons that Willis and Bowman have been starting alongside each other. Their coverage ability is a large reason as to why. Having two players that can remain on the field for all three downs and not be a liability in coverage is a huge advantage for the 49ers defense and allows them to be very flexible in their coverage schemes.

The Pick at the 'Stick

Of course, there's no way that I can breakdown the performance of the 49ers' inside linebackers against the Falcons without including the play that sealed the victory. 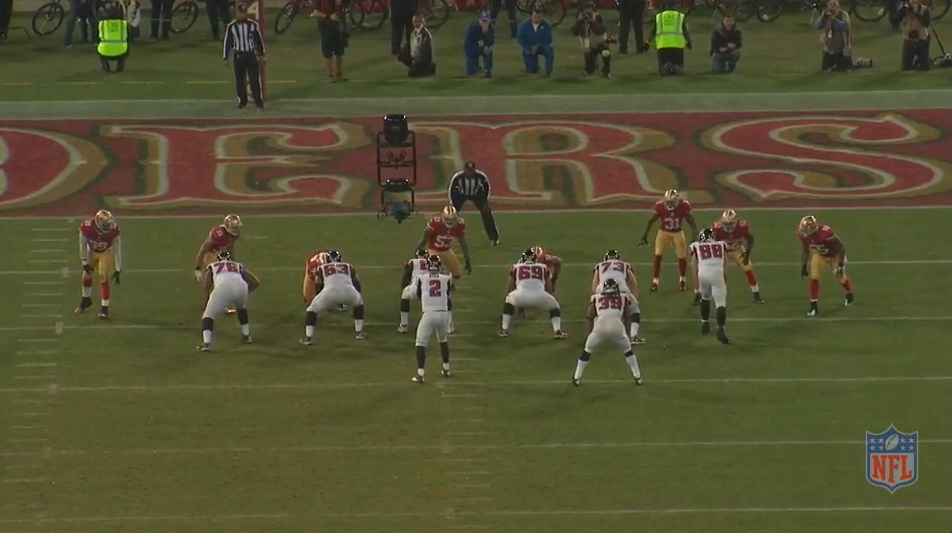 With the game on the line, San Francisco did something that they almost never do: a cover-0 blitz. The 49ers don't blitz a ton in general and when they do, it's typically just with five defenders. On this play, the 49ers would blitz seven, leaving the remaining four defenders in man coverage without any safety help. According to PFF's Jeff Deeney, it was just the fifth time the 49ers have done so all season.

On NaVorro Bowman's game-winning interception, it was the 5th time in 618 pass plays this season the #49ers rushed the QB with seven guys.

Matt Ryan knows that the blitz is coming and that he's going to have to get the ball out immediately. Eric Reid comes unblocked as a result of the blitz, forcing the matter even more. 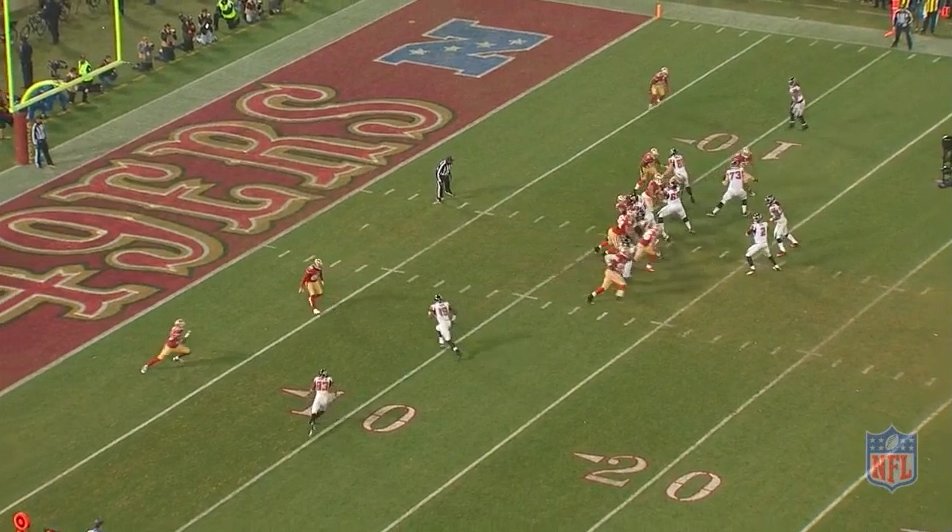 There were two fantastic individual efforts on this play. The first was by corner Tramaine Brock. Brock is clearly anticipating the slant route on this play. Following the snap, Brock never goes into a backpedal and as you can see form the image above, he's begun to break on the slant before Ryan has even started his throwing motion. It's just incredible awareness and anticipation from Brock in a key moment. If he waits even another half-second before breaking on the route, he probably isn't able to make the play. Instead, Brock arrives at the same time the ball does, prevents the completion and knocks the ball up into the air.

The second, of course, comes courtesy of Bowman. As was brought up during the broadcast, Bowman was initially blitzing over the center. There's a reason that every single defensive coach stresses running to the ball and this is the perfect example of how it can pay off. In reality, considering what he was doing at the start of the play, Bowman really had no business being around this play. But just like Brock, the awareness to recognize what was happening and react to it without hesitation is extremely impressive.

These are just a few examples of the traits that make Patrick Willis and NaVorro Bowman special players. It truly is a treat getting to watch them each week. In a league and a culture where we're constantly looking for the next player or team or whatever to anoint as the latest and greatest, it seems as if people have gotten tired of talking about them and are ready to move on to the next batch of young, talented inside linebackers. But no matter how hard you look, you'll be hard pressed to find two more complete linebackers in the game.