The NFL playoff schedule is set. We take an early look at the complete schedule for Wild Card weekend.

The Saints and Eagles will kick off on Saturday at 5 p.m. PT. If the Saints beat the Eagles, they will travel to Seattle, while if the Eagles win, they would travel to Carolina. I'm sure I wasn't the only person thinking New Orleans would have a better shot against Dallas, but you can't win them all.

On the AFC side of things, the Colts host the Chiefs on Saturday afternoon, while the Bengals host the Chargers Sunday afternoon. Anybody else think the AFC slot looks kinda blah? Colts-Chiefs could be a solid game, but the two NFC games strike me as potentially a little more high scoring, and just a little more entertaining. It will be interesting to see what the Saints do outdoors in the severe cold of Philadelphia, but I think they can put up points against a suspect Eagles defense.

The 49ers get a Packers squad that won three of four to close out the season and win the division. More importantly, they have Aaron Rodgers back in the saddle. The 49ers are the better team, but the Packers always have a puncher's chance with Aaron Rodgers and the frozen tundra of Lambeau Field. Temperatures are expected to be in the teens, but the 49ers can do things in cold weather. We saw them beat the New England Patriots at a cold, rainy Gillette Stadium. Additionally, Colin Kaepernick had plenty of chances to play in cold weather while at UNR. The weather is an issue, but it's not the end of the world.

Here is a playoff schedule, courtesy of Kevin Nogle from The Phinsider. 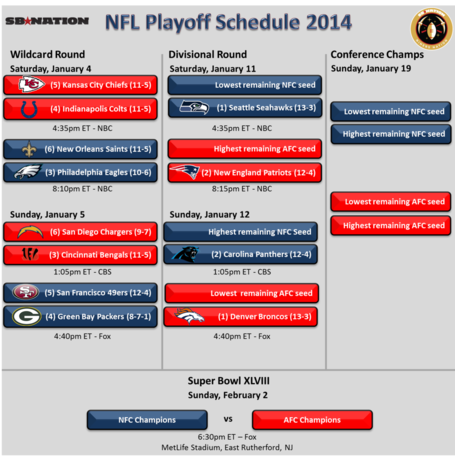